The Tiger Bay Warriors were a Junior American flag football team established in Cardiff in 1993. After initial success, and rising to the senior level, a loss of key players halted the momentum and the team folded in 2000.

The club was formed in 1993 as the Tiger Bay Warriors, and started out as a Junior Flag team. [1] They were accepted into Junior Division Two Touch and recorded a 4–0–0 record in the regular season (including one postponed game against the Gloucester Gladiators which was awarded to the Warriors) before narrowly losing the bowl game 6–8 to the London Capitals. [2] [3]

The following two years, the Warriors played at Youth Kitted level. In 1994 season they won the BYAFA South East Division with a perfect 8–0 record and reached the playoff semi-final. [4] In 1995, they recorded a 2–3 season in the Southern Division but still managed to reach the playoffs, losing 0–8 to the London Capitals in their quarter-final. [5]

The decision was then taken to move up to senior level, and the Warriors were admitted to the Southwest Conference of the British Senior League's third division. Their experience in their previous youth tournaments seemed to serve them well as their first season at this level saw them post an 8–2 record, finishing second in their conference. They went on the reach the playoff semi-final before losing to the eventual divisional champions, the Winchester Rifles. [6] They reached the play-offs once again in 1997 after finishing second in their conference, only to be forced to withdraw from their playoff match against the PA Knights due to an acute player shortage. [7]

As with the year before, the Warriors finished the 1998 regular season in second place, tied with the Southern Sundevils with a 7–1 record but with an inferior points difference. As a result, they lost home advantage for their playoff match and this proved crucial as they went down by a single point to the London Mets. [8] The following year, they once again finished the regular season with a 7–1 record tied with the Hertfordshire Stags and the Sabres, but they avoided last season's disappointment by finishing top on points difference. This paid off as they made it all the way to the divisional play-off final before losing a tight final game against the Chester Romans by just two points. [9]

Unfortunately the Warriors were unable to build on this success. After losing several key players and the services of Head Coach Rob Mota, they were forced to withdraw from the league in 2000 [10] and subsequently the team disbanded.

With the team based in Cardiff with most of their games were played at Canton rugby club, Channel View Leisure Centre and Roath Park. [11] [12]

The British American Football League (BAFL) was the United Kingdom's primary American Football league from 1998 until 2010. It was formerly known as the British Senior League (BSL) until 2005. BAFL was the trading name for Gridiron Football League Ltd incorporated as a Company limited by guarantee. Registration number: 2353839. The company went into administration on 1 April 2010, and the company ceased to trade as from this date. 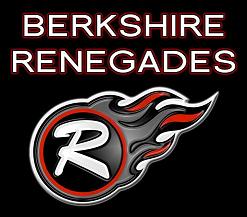 As of 2012 the Berkshire Renegades are an American Football team currently competing in the Division 2 South British American Football League. They train & play their home games at the University of Reading in Reading, Berkshire. First formed in 1985, they competed in the United Kingdom American Football Association, the Budweiser League, the Combined Gridiron League and the British National Gridiron League before folding in 1990. They were reformed in 2005 and entered the BAFL the following year. At the conclusion of the 2009 season the BAFL ceased to operate and the Berkshire Renegades joined the BAFA Community Leagues. At the conclusion of the 2011 Season the Berkshire Renegades were invited to compete in the BAFA National Leagues Division 1 for the 2012 Season. The team accepted and were placed in Division 1 Central & South. At the conclusion of the 2012 season, the BAFANL decided to re-align the league once again and the Renegades were put in the Premier South division.

The Bristol Academy Aztecs are a British American football team based in Bristol, England, at the Stoke Gifford Stadium of South Gloucestershire and Stroud College, Bristol, which is also the base for a number of other sports teams such as Bristol City W.F.C..

The Southern Sundevils were an American football team who competed in the Southern Conference of British American Football League (BAFL) Division One. They played their home games at the ROKO Leisure Centre in Portsmouth, Hampshire, England. Russ Hewitt was the current general manager and head coach. Russ had been with the team since its inception as a player on the youth team and has progressed through the Senior level and since retiring from player was involved in the management and coaching side of the organisation. Many former Sundevil members have coached or played for national sides, with some going on to trial and play for professional or semi-professional teams.

The Cambridgeshire Cats are an American football team competing in Southern Football Conference 1, East Division of the BAFA National Leagues, with their home games played at Coldhams Common in Cambridge. The club was first formed in 1984, entered senior competition in 1985 and won two divisional titles in the 1990s as well appearing in the playoffs a further six times before folding in 1998. They reformed once again in 2002 and re-entered senior competition, gaining promotion in 2003 only to be relegated two seasons later. Most recently, they won the South East Conference of Division One before losing to the Tamworth Phoenix in the playoff semi-final.

The Essex Spartans are an American Football team based in Grays, Essex, England. The team has played under the Spartans name since 1998 following a merger between two local teams and currently play in the BAFA National Leagues, Southern Football Conference 2 East.

The Colchester Gladiators are an American Football team competing in the South East National League of British American Football League (BAFL). They play their home games at the Colchester Rugby Club in Colchester, Essex and train at the Sir Charles Lucas Centre for Sport and Art in Colchester. The club was first formed in 1983 and entered senior competition in 1985 where they enjoyed a degree of success, winning the Budweiser League Premier Division playoffs in 1988 and only failing to make the post season playoffs on three occasions before the team folded in 1995. They reformed again in 2003 after a high-profile charity reunion match which featured TV presenter Dermot O'Leary. The Gladiators entered the BAFL the following year, gaining promotion in 2006 only to be relegated after just one season. The Gladiators went on to win the 2013 National League title after recording an unbeaten 13–0 season.

The South Wales Warriors are a British American Football team based in Llanharan, Mid Glamorgan, Wales. They play in SFC 2 West for the 2019 season. The team was formed in 2001 after the Tiger Bay Warriors had disbanded due to the departure of head coach Rob Mota, along with key staff and players, by the remaining players and staff; the staff used equipment, resources and shirts from the folded Tiger Bay Warriors for economical purposes.

Gateshead Senators are a British American football Team based in South Tyneside at Monkton Stadium.

The Maidstone Pumas are an American Football team based in Maidstone, Kent. The team were formed in 1997 as a continuation of the former youth team of the same name, and currently play in National Division South Central Conference of the BAFA National Leagues (BAFANL).

The Plymouth Admirals were an American Football team who competed in the British American Football League (BAFL) up until 2010. They played their home games at the Parkway Sports Club in Ernesettle, Plymouth. Formed in 1984, the Admirals were one of the longest established American football teams in the United Kingdom. They enjoyed a fair degree of success, spending a number of years in the top division, figuring in post-season playoffs on eight occasions, and winning the BNGL Premier Division playoffs in 1991.

The Dundee Hurricanes are an amateur American football team based in Dundee, Scotland. They are currently a non-league club, affiliated with the governing association BAFA.

The Cornish Sharks are an amateur American Football team currently competing in National South Division of the BAFA National Leagues (BAFANL). They played their home games at the Treviglas Sports Hub, Newquay, Cornwall. In their first season in the BAFL, the Sharks recorded a 7 wins to 3 losses record and finished second in their conference, but lost their playoff quarter-final to the eventual divisional champions, the Norwich Devils.

The East Kent Mavericks are an American Football team based in Canterbury, Kent. First formed in 2002 as a flag football team, they currently play in the South Division of the BAFA National Leagues Premier Conference.

The London Warriors are a British American Football club based in Thornton Heath, London and currently play in the BAFA Premier Division South for the 2018 season. They were formed in 2007 as the London Cobras and were senior outfit for the London Warriors youth team. They are five-time BritBowl champions, with their most recent victory coming against the Tamworth Phoenix in Britbowl XXXII. They play their home games at Streatham-Croydon RFC.

The Peterborough Saxons were a British American Football team based in Thorney, Cambridgeshire. They played in the BAFA Nation League's Midlands Conference Division One for the 2016 season but dropped out the League after one regular season game. The senior team was first formed in 2001 as the East Midlands Saxons and entered senior competition the following year. Particular seasons of note are 2008, 2012, and 2015, where the Saxons have won a significant number of games, achieved the play-offs or final, and achieved promotion. The Saxons folded in 2016 following an opening day defeat to the Nottingham Caesars.

The Hertfordshire Cheetahs are an American football team based in St Albans, competing in SFC 2 East of the BAFA National Leagues (BAFANL), with their home games played at St Albans Rugby Club. The senior team was first formed in 1986 and entered senior competition the following year, making them the third longest continuously competing team in the United Kingdom behind only the Birmingham Bulls and Glasgow Tigers. During their history, the Cheetahs have reached the Divisional Playoff final on three occasions: in 1997, 2004 and 2005.

The BAFA National Leagues are the primary American football competition in England, Scotland and Wales. They were formed by the British American Football Association in 2010 following the collapse of the British American Football League to coordinate contact football within Great Britain. There are currently 62 teams who compete in 12 divisions across three levels of football. The 10 teams who contest both the Premier Division North and South compete to reach the Britbowl. The current champions are the London Warriors and are also the most successful having won 6 titles. BAFA also operate a flag football, Women's division as well as a Youth league across all age ranges. 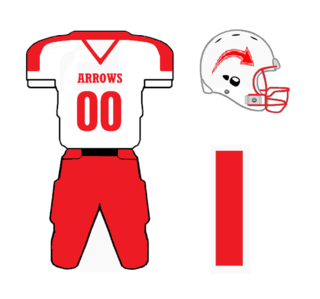 The Redditch Arrows were an American Football team based initially in Redditch and later in Birmingham, United Kingdom. They were formed in 1986 and disbanded in 2009.

The Chester Romans are an American Football team based in Chester, United Kingdom. Formed in 1986, they are one of the oldest teams in the UK. They play in the BAFANL NFC 1 South.