Tiger Cruise is a Disney Channel Original Movie that debuted on Disney Channel in the United States on August 6, 2004. It stars Hayden Panettiere and Bill Pullman. The film's fictional events are intertwined with the real-life events of the September 11, 2001 attacks in which USS Constellation was, as depicted, actually returning from her 2001 Western Pacific deployment with "tigers" on board when the September 11 terrorist attacks occurred.

Teenager Maddie Dolan hails from San Diego. She looks forward to the day her father Gary, a Commander in the U.S. Navy, retires from military service so that he can share Maddie's life at home with her sister Kiley and their mother Kate. Maddie's dad invites her to participate in Operation Tiger, a week-long cruise for military families and their friends aboard the aircraft carrier USS Constellation. She agrees and soon hits it off with fellow teens Anthony and Tina. Tina is fascinated by the military, her elder sister Grace being a United States Naval Aviator. Anthony, an aspiring drummer from New York City, would rather have nothing to do with the military, although his elder brother Kenny is a sailor. Maddie also bonds with preteen Joey, whose mom is a "Squid" (Naval slang for sailor) aboard the Constellation.

Gary, Grace, and Kenny express their disappointment over what happened during the air show. Commander Dolan tells Maddie about another, tragic incident when a crew member was killed landing a jet during practice maneuvers. Maddie tearfully divulges her true reason for accepting his invitation: she dislikes the negative connotations that come with being a military brat. Maddie recalls how she and Kiley got jumped on their first day at school and suspended for fighting. Gary agrees to come home after the voyage.

On September 11, 2001, the crew and passengers learn of the terrorist attacks on the World Trade Center and The Pentagon. With the Constellation abruptly going on full alert, Tina finally realizes the truth behind her sister's assertions regarding the less-glamorous side of military life. Anthony fears for the safety of people he knew who had jobs in the Twin Towers. Maddie experiences her father's honor, courage, and commitment to his family and also his will to make sacrifices for their country. Although upset that her dad is still needed in the military, she and her fellow Tigers express their pride and support by unfurling a giant American flag on the Constellation's flight deck. Maddie, having concluded that being a "brat" isn't so bad after all, tells her father and his crew-mates to keep doing what they do.

While the film is set aboard the USS Constellation, it was actually filmed aboard the USS John C. Stennis and the USS Nimitz. [1] It was also filmed on location in San Diego. [2]

Panettiere sings the theme song for the film, "My Hero Is You". [2]

Tiger Cruise had its broadcast premiere on Disney Channel on August 6, 2004, but the film had its premiere in Los Angeles with many stars of other Disney Channel Original Movies in attendance. [3]

When USS Constellation arrives in San Diego, California, downtown San Diego is featured in the background, showing the Twin Hyatts. In actuality, only the first one had been completed by September 2001, roughly around the time of the terrorist attacks on the World Trade Center and the Pentagon.

Much of the movie was shot on board USS John C. Stennis, with additional filming on board USS Nimitz and at least one passing shot of USS Abraham Lincoln. (Constellation was decommissioned before production started). The hull numbers of all three ships are visible at various times throughout the movie. Actual crew members of John C. Stennis were used as extras, and a few can be seen wearing John C. Stennis ballcaps instead of the proper Constellation caps.

On September 12, 2001, the full moon was shown. The actual phase of the moon was a waning crescent less than a week away from a new moon.

The shots in the beginning of the movie featuring Maddie's home were filmed at Orange Lake Country Club in Kissimmee, Florida.

Many critics noted that the film departed from the usual Disney Channel Original Movie formula. Laura Fries of Variety noted that the film "...carries many Disney hallmarks — a burgeoning teen-queen star, a catchy theme song and predictable subplots, but marks a departure from the net’s usual fairytale formula" and adds that writers "Anna Sandor and Bruce Graham deserve kudos for filtering a tough story through the eyes of kids without diluting the message... [The film] never feels exploitative or opportunistic." [2] Mike McDaniel of The Houston Chronicle states that "The sobering events of 9/11 give this otherwise typical Disney movie unusual gravity." [4] Barbara Vancheri of Pittsburgh Post-Gazette describes Tiger Cruise as "a veritable recruitment film with a predictable conclusion but it's a pretty good little movie with solid leading performances", adding "the movie comes down on the side of maturity, sacrifice and duty, and it's hard to argue with that." [5] However, Anita Gates of The New York Times was more critical, describing the film as "a worthy two-hour movie", but notes that Tiger Cruise "feels polarizing rather than patriotic". [6]

Pearl Harbor is a 2001 American romantic war drama film directed by Michael Bay, produced by Bay and Jerry Bruckheimer and written by Randall Wallace. It stars Ben Affleck, Kate Beckinsale, Josh Hartnett, Cuba Gooding Jr., Tom Sizemore, Jon Voight, Colm Feore, and Alec Baldwin. The film presented a heavily fictionalized version of the Japanese attack on Pearl Harbor on December 7, 1941, focusing on a love story set amid the lead up to the attack, its aftermath, and the Doolittle Raid.

USS Constellation (CV-64), a Kitty Hawk-class supercarrier, was the third ship of the United States Navy to be named in honor of the "new constellation of stars" on the flag of the United States. One of the fastest ships in the Navy, as proven by her victory during a battlegroup race held in 1985, she was nicknamed "Connie" by her crew and officially as "America's Flagship".

The Black Hole is a 1979 American dark science fiction film directed by Gary Nelson and produced by Walt Disney Productions. The film stars Maximilian Schell, Robert Forster, Joseph Bottoms, Yvette Mimieux, Anthony Perkins and Ernest Borgnine, while the voices of the main robot characters are provided by Roddy McDowall and Slim Pickens. The music for the film was composed by John Barry.

USS Midway (CVB/CVA/CV-41) is an aircraft carrier, formerly of the United States Navy, the lead ship of her class. Commissioned a week after the end of World War II, Midway was the largest ship in the world until 1955, as well as the first U.S. aircraft carrier too big to transit the Panama Canal. She operated for 47 years, during which time she saw action in the Vietnam War and served as the Persian Gulf flagship in 1991's Operation Desert Storm. Decommissioned in 1992, she is now a museum ship at the USS Midway Museum, in San Diego, California, and is the only remaining inactive U.S. aircraft carrier that is not an Essex-class aircraft carrier.

Hayden Lesley Panettiere is an American actress, model, and singer. She is best known for her starring role as Claire Bennet on the NBC superhero series Heroes (2006–2010) and Juliette Barnes in the ABC/CMT musical drama series Nashville (2012–18), the latter of which earned her two nominations for the Golden Globe Award for Best Supporting Actress – Series, Miniseries or Television Film.

Strike Fighter Squadron 41 (VFA-41) also known as the "Black Aces", is a United States Navy strike fighter squadron based at Naval Air Station Lemoore, California, flying the F/A-18F Super Hornet. They are attached to Carrier Air Wing 9 (CVW-9). Their radio callsign is "Fast Eagle" and their tailcode is NG.

Ice Princess is a 2005 American teen sports comedy drama film directed by Tim Fywell, written by Hadley Davis from a story by Meg Cabot and Davis, and starring Michelle Trachtenberg, Joan Cusack, Kim Cattrall and Hayden Panettiere. The film focuses on Casey Carlyle, a normal teenager who gives up a promising future academic life in order to pursue her new-found dream of being a professional figure skater. The film was released on March 18, 2005. Ice Princess had an unsuccessful performance at the box office, grossing $24 million in the United States during its theatrical run against a production budget of $25 million. 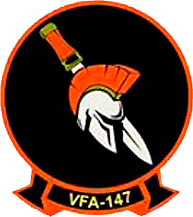 Strike Fighter Squadron One Five One (VFA-151) nicknamed the Vigilantes are a United States Navy F/A-18E Super Hornet fighter squadron stationed at Naval Air Station Lemoore, California. The squadron is a part of Carrier Air Wing 9 (CVW-9). As part of CVW-9, the squadron's tail code is NG and its radio callsign is "Ugly". 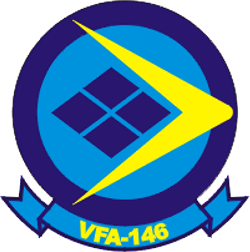 Strike Fighter Squadron 146 (VFA-146) also known as the "Blue Diamonds" is a United States Navy operational fleet strike fighter squadron based at Naval Air Station Lemoore California. They fly the F/A-18E Super Hornet and are attached to Carrier Air Wing 11, deployed aboard USS Theodore Roosevelt. Their tailcode is NH and their radio callsign is Diamond.

Strike Fighter Squadron 154 (VFA-154), also known as the "Black Knights", is a United States Navy strike fighter squadron stationed at Naval Air Station Lemoore. The Black Knights are an operational fleet squadron flying the F/A-18F Super Hornet. They are currently attached to Carrier Air Wing Eleven and deployed aboard the aircraft carrier USS Theodore Roosevelt. Their tailcode is NH and their callsign is "Knight".

Jansen Rayne Panettiere is an American actor. He is known for his roles in films The Perfect Game, Ice Age: The Meltdown, The Martial Arts Kid and How High 2. His elder sister is actress Hayden Panettiere.

Bianca Suzanne Collins is an American actress. She is probably best known for her role as Patti Perez in the Nickelodeon series Unfabulous, and as Lulu in the Teen Nick program Gigantic.

The Suite Life on Deck is an American teen sitcom that aired on Disney Channel from September 26, 2008 to May 6, 2011. It is a sequel/spin-off of the Disney Channel Original Series The Suite Life of Zack & Cody. The series follows twin brothers Zack and Cody Martin and hotel heiress London Tipton in a new setting, the SS Tipton, where they attend classes at Seven Seas High School and meet Bailey Pickett while Mr. Moseby manages the ship. The ship travels around the world to nations such as Italy, France, Greece, India, Sweden and the United Kingdom where the characters experience different cultures, adventures, and situations. 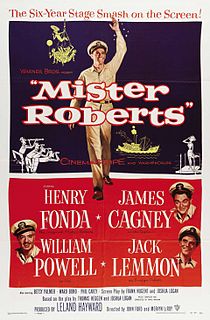 Mister Roberts is a 1955 American Warnercolor in CinemaScope comedy-drama film directed by John Ford and Mervyn LeRoy, and featuring an all-star cast including Henry Fonda as Mister Roberts, James Cagney as Captain Morton, William Powell as Doc, and Jack Lemmon as Ensign Pulver. Based on the 1946 novel and 1948 Broadway play, the film was nominated for three Academy Awards, including Best Picture and Best Sound, Recording, with Jack Lemmon winning the award for Best Supporting Actor. 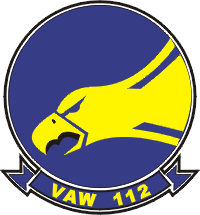