Tiger Stadium [3] is a 10,001-capacity high school and junior collegiate American football, track and field and soccer stadium adjacent to Corsicana High School in Corsicana, Texas. It is the current home of the Corsicana Tigers football, track and field, and soccer teams, the Navarro College Bulldogs football team, and the Heritage Bowl (Corsicana), an NCAA Division II Football Bowl Game.

The sports complex began its history as part of a larger $44.5 million bond project that was passed in 2004 to enlarge the high school, renovate and expand Collins Middle School and improve facilities for sports and other extracurricular activities at both schools. Tiger Stadium sits on about 30 acres (120,000 m2) of a 116-acre (0.47 km2) site bought by the Corsicana Independent School District in 2004 in anticipation of the new stadium. Tiger Stadium replaces Tiger Field, which opened in 1961, as the home for the Corsicana Tigers and Navarro College Bulldogs. The stadium has not only hosted games for the main tenants, but has also recently been used as a neutral site along with other newer high school, collegiate and professional stadiums in Texas in the University Interscholastic League's [4] annual Texas State Football Playoffs.

Corsicana is a city in Navarro County, Texas, United States. It is located on Interstate 45, some 58 mi (89 km) south of downtown Dallas. The population was 23,770 at the 2010 census. It is the county seat of Navarro County.

The Sun Bowl is a college football bowl game that has been played since 1935 in the southwestern United States at El Paso, Texas. Along with the Sugar Bowl and Orange Bowl, it is the second-oldest bowl game in the country, behind the Rose Bowl. Usually held near the end of December, games are played at the Sun Bowl stadium on the campus of the University of Texas at El Paso; since 2011, it has featured teams from the Atlantic Coast Conference (ACC) and the Pac-12 Conference. 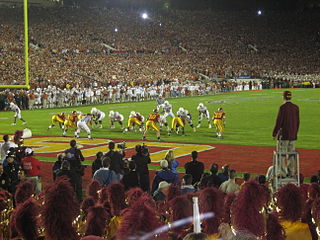 In North America, a bowl game is one of a number of post-season college football games that are primarily played by teams belonging to the NCAA's Division I Football Bowl Subdivision (FBS). For most of its history, the Division I Bowl Subdivision had avoided using a playoff tournament to determine an annual national champion, which was instead traditionally determined by a vote of sports writers and other non-players. In place of such a playoff, various cities across the United States developed their own regional festivals featuring post-season college football games. Prior to 2002, bowl game statistics were not included in players' career totals and the games were mostly considered to be exhibition games involving a payout to participating teams. Despite attempts to establish a permanent system to determine the FBS national champion on the field, various bowl games continue to be held because of the vested economic interests entrenched in them. 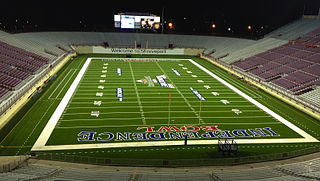 Independence Stadium is a stadium owned by the city of Shreveport, Louisiana and is the home of the Independence Bowl. 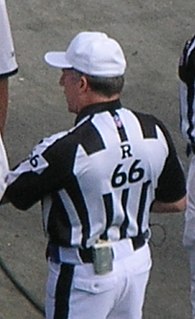 Walter John Anderson is a former American football official in the National Football League (NFL) from the 1996 NFL season to the 2019 NFL season. He wore uniform number 66. Anderson spent his first seven seasons in the NFL as a line judge before being promoted to referee for the start of the 2003 NFL season after Dick Hantak and Bob McElwee announced their retirements. He is notable for officiating Super Bowl XXXV. Anderson was also named as referee for Super Bowl XLV which was played on February 6, 2011, in Arlington, Texas, at Cowboys Stadium.

Tom Wilson was an American football player and coach. He served as a head coach at the high school and collegiate level. He was the head football coach at Texas A&M University team from 1978 to 1981.

Zarnell Stephen Fitch is an American football coach and former player. He was signed by the New York Jets as an undrafted free agent in 2006, spent time with two other NFL teams and played in several other professional leagues. He is currently the Defensive Line Coach at TCU, his alma mater.

Sam McElroy is an American football coach. He served as head football coach at Tarleton State University from 2005 to 2009, compiling a record of 40–15.

Texas vs The Nation was an American college football all-star bowl game played from 2007 to 2013. Originally played at the Sun Bowl Stadium, the format of the game pitted 50 top-rated college seniors who played college or high school football in Texas against a squad of 50 top-rated seniors from the other 49 states. In its first year, 73% of players who participated in the game were signed by National Football League (NFL) teams. In 2011, the game moved from El Paso to San Antonio, and the National Football League Players Association (NFLPA) became the named sponsor of the game. In 2012, the NFLPA began its own all-star game, the NFLPA Collegiate Bowl, and the Texas vs The Nation game was not held. The game was revived in 2013 at Eagle Stadium in Allen, but did not return in 2014.

The SWAC Championship Game is an American college football game that is held annually on the first Saturday in December by the Southwestern Athletic Conference (SWAC) to determine its football champion. The game pits the champion of the Eastern Division against the champion of the Western Division in a game that follows the conclusion of the regular season. From 2015 onward, the winner of the game has represented the SWAC in the Celebration Bowl. As of the 2019 season, the game is sponsored by Cricket Wireless.

Homer Jordan is a former American football quarterback. He was the starting quarterback for the Clemson Tigers 1981 National Championship team. He was also a member of the Cleveland Browns in 1987. Previously, he played four seasons in the Canadian Football League.

The AdvoCare Texas Kickoff is an annual college football game played on the opening weekend of the college football season in Houston, Texas, at NRG Stadium. The game's title sponsor is AdvoCare, a dietary supplement company based in Plano, Texas.

The 2014 Mississippi State Bulldogs football team represented Mississippi State University in the 2014 NCAA Division I FBS football season. The team was coached by Dan Mullen, who was in his sixth season with Mississippi State. The Bulldogs played their home games at the newly expanded and renovated Davis Wade Stadium in Starkville, Mississippi and competed in the Western Division of the Southeastern Conference (SEC).

The 2018 College Football Playoff National Championship was a college football bowl game that determined a national champion in the NCAA Division I Football Bowl Subdivision for the 2017 season. The Alabama Crimson Tide defeated the Georgia Bulldogs 26–23, coming back from a 13–0 deficit at halftime to secure the win in overtime. True freshman quarterback Tua Tagovailoa and defensive tackle Daron Payne were respectively named the offensive and defensive players of the game.

The 2018 Rose Bowl was a college football bowl game between the Oklahoma Sooners and the Georgia Bulldogs, played on January 1, 2018 at the Rose Bowl stadium in Pasadena, California. The 104th Rose Bowl Game was a semifinal for the College Football Playoff (CFP), matching two of the top four teams selected by the system's selection committee. Georgia and Oklahoma competed for a spot at the 2018 College Football Playoff National Championship game, to be played on January 8, 2018 at Mercedes-Benz Stadium in Atlanta, Georgia. The Georgia Bulldogs won the game with a 27-yard run by Sony Michel, shortly after Lorenzo Carter blocked Oklahoma Sooners' field goal attempt in the second overtime. The game lasted four hours and five minutes. With 26.8 million viewers on ESPN, the game ranked as the fifth most-viewed cable program of all time.

The Heritage Bowl is an annual NCAA Division II post-season college football bowl game held in Corsicana, Texas at Tiger Stadium. Established in 2017 by Businessman Antwone "Tony" Taulton, the game is played each year on the first Saturday in December. The two participating teams will consist of schools competing in the Lone Star Conference, Mid-America Intercollegiate Athletics Association and/or the Great American Conference. The inaugural game was held on December 2, 2017 with Central Oklahoma defeating Tarleton State 38 to 31.

The 2017 Tarleton State Texans football team represented Tarleton State University in the 2017 NCAA Division II football season. They were led by head coach Todd Whitten, who was in his consecutive second season at Tarleton State and sixth overall at head coaching the Texans. The Texans played their home games at Memorial Stadium and were members of the Lone Star Conference. The Texans finished the regular season with a 6–5 record, 4–4 in the LSC, and tie for fourth place in the Lone Star Conference. The Texans were invited to play in the inaugural Corsicana Bowl in Corsicana, Texas against Central Oklahoma. TSU lost 38-31.