Tiger in the Bush

Tiger in the Bush (1957) is a novel for children by Australian author Nan Chauncy, illustrated by Margaret Horder. It won the Children's Book of the Year Award: Older Readers in 1958. [1]

This novel is the first of two by the author concentrating on the Lorenny family, who live deep in the rainforest in south-western Tasmania. Badge Lorenny, the youngest of the three Lorenny children, is given a camera by two visiting scientists who want his help in capturing images of a Tasmanian tiger rumoured to be in the district.

In an overview of Chauncy's children's books dealing with the Australian bush, Susan Sheridan and Emma Maguire noted: "Chauncy draws on the relationship that had long been cultivated between the bush environment and the identity of settler Australia, depicting the bush as a site which fosters in the Lorenny family those characteristics of self reliance, mutual support and practical wisdom that were believed to contribute to a uniquely Australian character." And they concluded "...Chauncy’s treatment of the theme of entering into masculinity in the Badge Lorenny novels is subtly altered by her emphasis on learning from the bush through an attitude of attentive love. In retrospect it is also possible to discern in her work the effects of an emerging, ecologically sensitive way of seeing human relationships to the environment." [2] 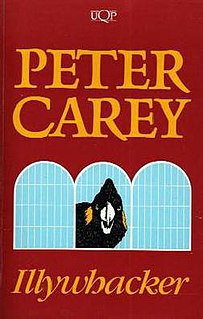 Illywhacker is a novel by Australian writer Peter Carey. It was published in 1985 to commercial and critical success, winning a number of awards and being short-listed for the Booker Prize.

Martin à Beckett Boyd was an Australian writer born into the à Beckett–Boyd family, a family synonymous with the establishment, the judiciary, publishing and literature, and the visual arts since the early 19th century in Australia.

James "Jim" Moloney is an Australian children's author. A prolific writer whose books span an age range from seven- to seventeen-year-olds, he is best known for his young adult novels. He has been nominated and won awards for his books in the Children's Book Council of Australia Awards. His books have been translated into French, Korean, Lithuanian and Flemish/Dutch. 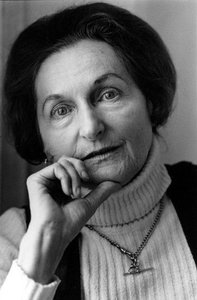 Jessica Margaret Anderson was an Australian novelist and short story writer. Born in Gayndah, Anderson lived the bulk of her life in Sydney apart from a few years in London. She began her career writing short stories for newspapers and drama scripts for radio, especially adaptations of well-known novels. Embarking on her career as a novelist relatively late in life - her first novel was published when she was 47 - her early novels attracted little attention. She rose to prominence upon the publication of her fourth novel, Tirra Lirra by the River, published in 1978. Although she remains best known for this work, several of her novels have garnered high acclaim, most notably The Impersonators (1980) and Stories from the Warm Zone and Sydney Stories (1987), both of which have won awards. She won the Miles Franklin Literary Award twice, and has been published in Britain and the United States. Jessica Anderson died at Elizabeth Bay, New South Wales in 2010, following a stroke. She was the mother of Australian screenwriter Laura Jones, her only child.

Sand Monkeys is a young adult novel by the Australian writer Joanne Horniman, who is known for novels centering on realistic depictions of people in unusual relationships. It was published in 1992 by Omnibus Books. The author's work on the novel was assisted by a writer's grant from the Australia Council. It received a Notable Book designation by the Children's Book Council of Australia.

The Nan Chauncy Award is an Australian children's literature award. It was initially established as a quinquennial award and is now presented biennially in the Children's Book Council Awards.

Tangara may refer to:

Circle of Friends is a 1995 film directed by Irish filmmaker Pat O'Connor, and based on the 1990 novel of the same name written by Maeve Binchy.

Emma Burstall is an English author and journalist. She has published several novels and writes for The Guardian and The Independent on Sunday.

Vision in White is the first book of the Bride Quartet series of romance novels, written by Nora Roberts. It spent two weeks atop the New York Times Bestseller List and reached number 3 on the USA Today bestseller list, marking the first time one of Roberts' books had become a bestseller in trade paperback format. A downloadable casual-play computer game based on the book was introduced by I-Play in 2010.

They Found a Cave is a 1962 Australian children's adventure film directed by Andrew Steane. The film was originally made from a book by the same name by author Nan Chauncy. In 2010, a company called Argosy Films, set up a website to find the production crew and actors/actresses of They Found a Cave and Bungala Boys for the 50th anniversary.

This article presents a list of the historical events and publications of Australian literature during 1957. 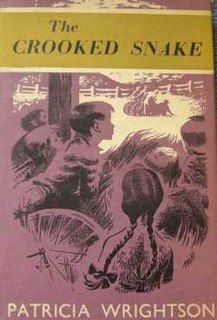 The Crooked Snake (1955) is the first novel by Australian author Patricia Wrightson. The book was illustrated by Margaret Horder. It won the Children's Book of the Year Award: Older Readers in 1956.

Devil's Hill (1958) is a novel for children by Australian author Nan Chauncy, illustrated by Geraldine Spence. It was joint winner of the Children's Book of the Year Award: Older Readers in 1959.

Tangara (1960) is a novel for children by Australian author Nan Chauncy, illustrated by Brian Wildsmith. It won the Children's Book of the Year Award: Older Readers in 1961. It was published in America in 1962 under the title The Secret Friends.

Robyn Marie Sheahan-Bright is an Australian author, editor and publisher of, and on, children's literature and publishing itself.