Tigers Jaw is the second full-length by American emo band Tigers Jaw. It was released on September 10, 2008, as the band's first album to be released through Prison Jazz. It was then released on vinyl in October 2009 through Photobooth, before a reissue through Run for Cover on August 3, 2010. The songs "Heat", "Meals on Wheels" and "The Sun" are all re-recorded songs from the band's debut album Belongs to the Dead , with "Okay Paddy" having its name changed to "Meals on Wheels". It has appeared on a best-of emo album list by Junkee . [4] Similarly, "I Saw Water" appeared on a best-of emo songs list by Vulture . [5]

All songs written by Tigers Jaw. 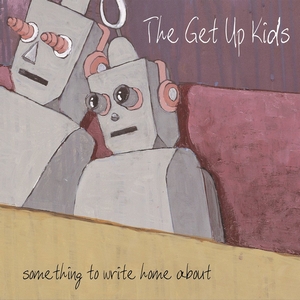 Something to Write Home About is the second studio album by American rock band the Get Up Kids, released on September 28, 1999, through Vagrant Records and the band's own label Heroes & Villains Records. Following the promotional tours for their debut album Four Minute Mile (1997), the band were in discussion with Mojo Records. During this period, James Dewees joined as the band's keyboardist. As negotiations with the label eventually stalled, they eventually went with Vagrant Records. They recorded their next album at Mad Hatter Studios in Silver Lake, Los Angeles, California, co-producing it with Chad Blinman and Alex Brahl. Described as an emo, emo pop and pop-punk album, Something to Write Home About expands on the harder edge of its predecessor, with frontman Matt Pryor citing the works of the Foo Fighters, Jimmy Eat World and Wilco as influences. 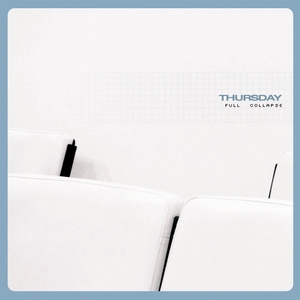 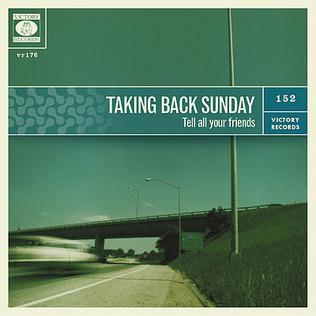 Tell All Your Friends is the debut studio album by American rock band Taking Back Sunday, released on March 26, 2002, through Victory Records. Established in 1999, the group underwent several line-up changes before settling on vocalist Adam Lazzara, guitarist and vocalist John Nolan, guitarist Eddie Reyes, bassist Shaun Cooper, and drummer Mark O'Connell. Taking Back Sunday released a five-song demo in early 2001, after which they toured the United States for most of the year. They rented a room in Lindenhurst, New York, where they wrote and demoed songs. In December 2001, the band signed with Victory Records; they began recording their debut album with producer Sal Villanueva at Big Blue Meenie Recording Studio in New Jersey. 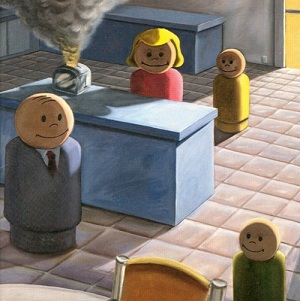 Diary is the debut studio album by American rock band Sunny Day Real Estate. The album is considered by many to be a defining emo album of the second wave, otherwise known as Midwest emo. It has also been called the missing link between post-hardcore and the nascent emo genre.

Nothing Feels Good is the second album by American rock band the Promise Ring. The album has gained a cult following, and is frequently regarded as one of the most influential records of the emo genre. The title of the album was used as the name of the book Nothing Feels Good: Punk Rock, Teenagers, and Emo by Andy Greenwald. Original bass player Scott Beschta is credited with writing and playing all the bass parts for the album.

Can I Say is the debut album by the American melodic hardcore band Dag Nasty, originally released in 1986 on Dischord Records. It was remastered and re-released on CD with bonus songs in 2002. "Circles" appeared on a best-of emo songs list by Vulture.

Hello Bastards is the second full-length album by the punk rock band Lifetime. It was recorded at Trax East Studio in New Jersey, USA, during May and June 1995 and was released by Jade Tree Records on September 25, 1995. On February 20, 2010, No Idea Records re-released the album on 12" color vinyl. 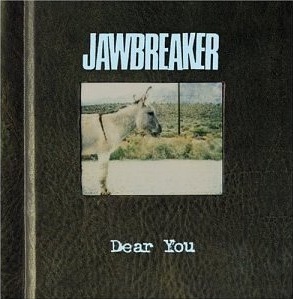 Dear You is the fourth and final studio album by American punk rock band Jawbreaker, released on September 12, 1995 by DGC Records, their first and only release on a major label. The band broke up after the release. 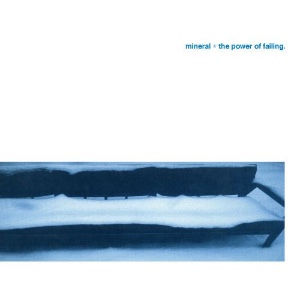 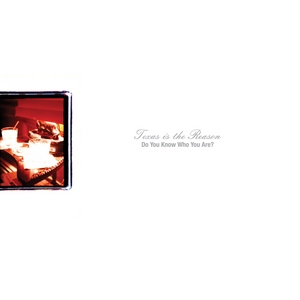 Do You Know Who You Are? is the first and only studio album by American rock band Texas Is the Reason. After finalizing their line-up, wrote and released their self-titled debut EP in late 1995. Following it, they began recording their debut album at Oz Studios in Baltimore, Maryland, co-producing it with Jawbox member J. Robbins. Preceded by an east coast tour with labelmates Gameface, Do You Know Who You Are? was released on April 30, 1996 through Revelation Records. It was promoted with a European tour with Samiam, two US tours, and a tour of Germany with Queerfish and Starmarket. Shortly after the Germany stint, the group broke up.

Christie Front Drive is the only studio album by the indie rock band Christie Front Drive. It was released in 1996 on Caulfield Records, and re-released as a remastered edition with DVD on Magic Bullet Records. Bonus DVD contains the band's final performance in 1996. "Radio" appeared on a best-of emo songs list by Vulture.

Owls is the debut studio album by American rock band Owls, which was released on July 31, 2001, through Jade Tree. After the disbandment of Joan of Arc, frontman Tim Kinsella reunited with the former members of Cap'n Jazz to form Owls. They recorded with Steve Albini at Electrical Audio in Chicago, Illinois, in April 2001. The album is an emo and indie rock record that has been compared with the works of Ghosts and Vodka, Pavement, and Captain Beefheart. 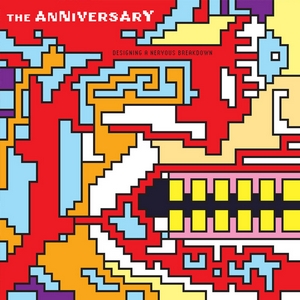 Designing a Nervous Breakdown is the debut studio album by the American rock band The Anniversary. The album was recorded in 1999, released on January 25, 2000, and features cover art from the video game Microsurgeon. 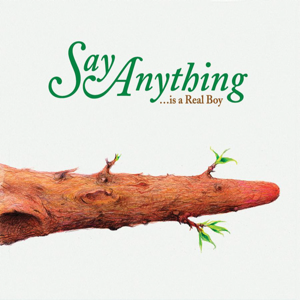 ...Is a Real Boy is the second full-length release by American rock band Say Anything. 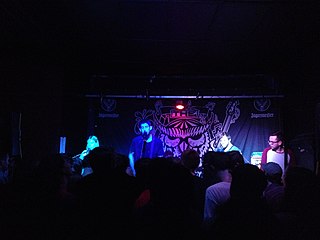 Tigers Jaw is an American rock band from Scranton, Pennsylvania, formed in 2005. Their first album, Belongs to the Dead, was released in 2006. They released a 7-inch single, "Spirit Desire", in 2009, on Tiny Engines. They released two more albums before announcing a hiatus in March 2013; however, their record label Run for Cover Records announced in August 2013 that the band's breakup was not official. Their fourth album, Charmer, came out in June 2014, and their fifth, Spin, in 2017. 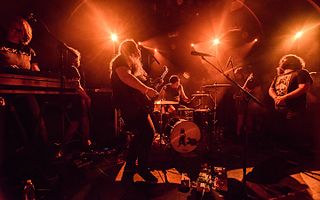 The World Is a Beautiful Place & I Am No Longer Afraid to Die is an American indie rock band formed in Willimantic, Connecticut, in 2009. They released their debut album Whenever, If Ever in 2013 to generally positive reviews, followed by Harmlessness in 2015 and Always Foreign in 2017. They have also released a number of EPs and splits, including a collaboration with spoken word artist Christopher Zizzamia, entitled Between Bodies, in late 2014. In 2021 they released a double album called Illusory Walls. 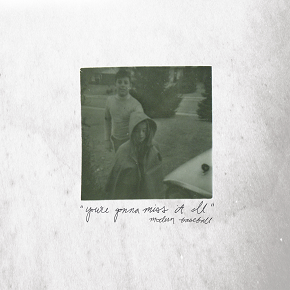 You're Gonna Miss It All is the second studio album by American emo band Modern Baseball. 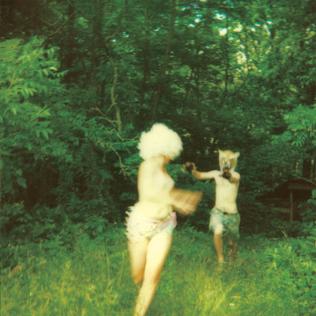 Harmlessness is the second studio album by American indie rock band The World Is a Beautiful Place & I Am No Longer Afraid to Die. It was announced on August 4, 2015, and was released on September 25. The title of the album is a play on the name of the band's first EP, Formlessness.

Adam McIlwee, often known by the stage name Wicca Phase Springs Eternal (WPSE), is an American musician from Scranton, Pennsylvania. Beginning his career as a member of the rock band Tigers Jaw, he soon began pursuing a solo career with a sound based in hip hop, emo and witch house. He has worked as a member of groups including emo rap pioneers GothBoiClique, hip hop collectives Thraxxhouse and Misery Club, and indie rock band Pay for Pain.

"Your Graduation" is a song recorded by the American rock band Modern Baseball for their second studio album, You're Gonna Miss It All (2014). It was released as its debut single from You're Gonna Miss It All on December 10, 2013, through Run for Cover Records. "Your Graduation" centers on the nostalgia and angst of a high school graduation, with its central narrator struggling to get over a break-up.