BrooklynVegan is a music blog founded in 2004 focusing primarily on music-related news and events taking place in and around New York City. [1]

BrooklynVegan began in 2004 as a blog that also covered vegan food options in Brooklyn, before the founder and editor-in-chief, simply known as Dave, shifted his focus to more exclusively documenting live music in the area. [2]

The blog is known for its efforts to expose upcoming artists, such as their installment in the Artist Discovery Series of blogs hosted by Austin City Limits and Lollapalooza, [3] [4] and their program on Sirius-XM. [2] The blog also showcases artists at SXSW and at CMJ, an annual music festival in New York, [5] when in the summer of 2007, they invited the then-self-released Justin Vernon of Bon Iver to play the Bowery Ballroom. [6]

Lollapalooza (Lolla) is an annual four-day music festival based in Chicago, Illinois at Grant Park. Performances include but are not limited to alternative rock, heavy metal, punk rock, hip hop, and electronic music. Lollapalooza has also provided a platform for non-profit and political groups and various visual artists. The four-day music festival in Grant Park hosts an estimated 400,000 people each year and sells out annually. Lollapalooza is considered one of the largest and most iconic music festivals in the world and one of the longest running in the United States. The 2020 event was canceled due to the COVID-19 pandemic in Illinois.

Mya Adriene Byrne is an American singer-songwriter falling mostly in the Americana vein, a combination of folk, blues and country music. Based in New York for 13 years, Byrne currently resides in San Francisco and performs solo or with various bands on both coasts. In 2014, Byrne publicly announced her transgender status and transition and has continued to work as a musician and performer.

Phoenix is an indie pop band from Versailles, France, consisting of Thomas Mars, Deck d'Arcy, Christian Mazzalai and Laurent Brancowitz. While they have released such critically acclaimed records as United and Wolfgang Amadeus Phoenix, they are best known for their singles "If I Ever Feel Better", "Lisztomania", " Too Young" and "1901".

White Rabbits is an American six-piece indie rock band based in Brooklyn, New York, originally from Columbia, Missouri. The band released its debut studio album, Fort Nightly, on May 22, 2007. Their second album, It's Frightening, was released on May 19, 2009. They released their third album, Milk Famous, on March 6, 2012. The band is signed to TBD Records.

Serious Business Records is an independent record label founded by Travis Harrison and Andy Ross in Brooklyn, NY in 2004. Since its inception, Serious Business Records has grown to include 14 acts, spanning the genres of classic rock, punk, pop, Americana/Old-Time, and electronic music. Its 33 releases have received press attention in Time Out NY, Allmusic, the Allmusic Blog, Pitchfork Media, the Washington Post, and Spin, amongst others. Serious Business bands have played 3 CMJ showcases, the Knitting Factory, Pianos, Irving Plaza, the Highline Ballroom, the Bowery Ballroom, and innumerable small New York venues.

Via Audio is an American indie pop band from Brooklyn, New York. Their first full-length album Say Something, was released in 2007 by Sidecho Records, to positive reviews from prominent independent music publications such as Pitchfork Media, Alternative Press, Spin Magazine, & Tiny Mix Tapes. The band met while attending college at Berklee College of Music in Boston, Massachusetts, later moving to Brooklyn, New York. They released their second full-length album titled Animalore on Undertow Music on March 9, 2010; it was produced by Spoon's Jim Eno. Their third full-length album titled "Natural Language" was self-released on March 25, 2014. It was produced and recorded by Dan Molad in Brooklyn, NY.

Graeme K. is a musician, producer, and owner of Mckeenstreet Music, a small, independent record label based in Portland, Maine. As an artist, he is known for dense, highly orchestrated compositions utilizing electronics and live instrumentation. In 2005, he was selected as one of the ten best unsigned artist in New York City by CMJ and asked to play in the 'Best of the Five Boroughs' concert in Prospect Park. In 2008, he released his debut record, Hidden Beast. The Bollard claimed, "The instrumentation and arrangements are astounding." Bluesbunny.com gave the record its highest score of 5 stars, calling it, "Music that convinces you. Music that will put you under a spell. A spell that relieves the mediocrity of existence. It's not even about the lyrics or the melody – it's about the effect on you." Following the release of Hidden Beast, he was invited to play a showcase at the 2008 CMJ Music Marathon. His song 'Aw. Turkish. Baby.' is used regularly as an intro for the Seattle radio show Too Beautiful to Live, hosted by Luke Burbank, and is featured on their TBTL Music Guide on iTunes. He was also the drummer in the rock groups Brenda and BOXY. In 2010, he won the Best Electronic Act award in The Phoenix.

Chidera Anamege, now known by his stage name Chiddy Bang, is an American hip hop recording artist. Prior to its breakup, Chiddy Bang was an American hip hop duo consisting of Anamege, under the stage name Chiddy, and Noah Beresin, under the stage name Xaphoon Jones. The duo was introduced by former band member Zachary Sewall in late 2008 while the two were studying at Drexel University, in Beresin's hometown of Philadelphia. Anamege's sound is based on the fusion of hip hop and alternative using samples from artists such as Ellie Goulding, Radiohead, Sufjan Stevens, Passion Pit, MGMT, Matt and Kim and Yelle. In 2013, Beresin left the group to focus on producing, and Anamege became a solo artist, with Beresin playing the role as frequent collaborator.

Royal Flush is an American humor magazine founded by editor Josh Bernstein of The #Number Foundation in 1997. The magazine started as an outlet for pop artists and creative directors of other magazines. The New York City art scene has been publishing their collected works in Royal Flush for years. The magazine offers satire on many aspects of life and popular culture, rock music, and public figures. 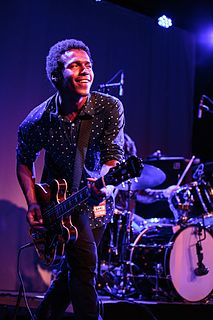 Benjamin Booker is an American musician, singer, songwriter and guitarist. He cites The Gun Club, Blind Willie Johnson and T. Rex as influences. His music was described by the Chicago Tribune as "a raw brand of blues/boogie/soul,", by The Independent as "frenzied guitar-strumming and raw, soulful vocals that are hair-raising in intensity" and by SPIN as "bright, furious, explosive garage rock."

Exploding in Sound is an American independent record label started by Dan Goldin and Dave Spak while students at Northeastern University. It is based in New York City. The label was founded in 2011 and has released albums from Speedy Ortiz, Pile, LVL UP, and Porches.

SALES is an American guitar-based indie-pop band from Orlando, Florida. The band's members are musicians Lauren Morgan and Jordan Shih. They are joined on tour by Malcolm Martin, who serves as the live drummer and percussionist.

Madam West is an indie rock quintet that formed in Brooklyn, New York City in 2013.

In The Whale is an American alternative rock band from Greeley, Colorado composed of Nathaniel Valdez and Eric Riley.

PopGun Presents is an events production/promotion, music curation and venue management collective based in Brooklyn, NY. It was founded in 2008 by Rami Haykal and Jake Rosenthal. 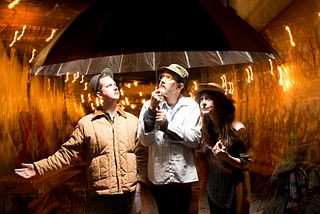 Tuff Sunshine is an American rock band based in the Bushwick neighborhood of Brooklyn, NY. The band is led by Johnny Leitera, who works with several backing musicians who join him onstage and on tour as well as in the studio. They include notable artists such as Linda Pitmon bassist Turner Stough and founding member Ani Cordero, among others. Drummer Ani Cordero was a founding member and left the band amicably in 2016 to pursue a solo career and still plays occasional shows with the band. Leitera and Tuff Sunshine have shared bills with such diverse artists as Tim Rogers/You Am I, John Doe, Jonathan Richman and The Dead Boys. Leitera also plays and tours as a solo musician and has played all over the United States, the UK and Australia.