Tiktok is a 2015 Ugandan silent short film written and directed by Usama Mukwaya. The movie features single actor Patriq Nkakalukanyi. [1] [2] It is Usama's first film under his film company O Studios Entertainment and is his first film as a writer, director and producer. [3] The film premiered at the inaugural Mashariki African Film Festival and received a nomination for best short film. [4] [5]

After being appointed to a new job, Sam (protagonist) begins his much-anticipated first day at work. He arrives, but this time around with precautions to manage his previously disorganized self. He drafts a new set of guidelines to help him improve and break out of his bad past habits, only to realize that some of the guidelines at work are against him. When he finally maneuvers through the preparation tasks, towards exiting the house, he notices that neighbors have been waiting for him on the door to join them to go for church service. He now realizes he had woken up on a wrong day, the day just before the actual day he must start work.

Principal production of the film began in September 2014. Director Usama Mukwaya hired Alex Ireeta as Director of Photography, having worked with him on his previous film Bala Bala Sese .

The emerging film industry in Uganda is known as Ugawood or sometimes Kinauganda by the locals. The 2005 production Feelings Struggle directed by Ashraf Ssemwogerere is credited with being the first Ugawood film. Many have asserted that this steadily growing film industry is derived from Hollywood, in the same manner as Nollywood and Bollywood. In a story that ran in a local newspaper in Uganda about the naming of the industry, filmmakers Kuddzu Isaac, Matt Bish and Usama Mukwaya were quoted as saying that Ugawood would be the most appropriate name for the industry.

Lukyamuzi Bashir (born 7 December 1986) is a Ugandan music director, film director and producer. He directed Blu*3's video Where you are featuring Goodlyfe Crew, Iryn Namubiru’s Bona Obasinga, and Vumilia by Chameleone. He also directed Goodlyfe Crew's music videos Talk n Talk, This is how we do it. He is popularly know to work with friend and artist A Pass. 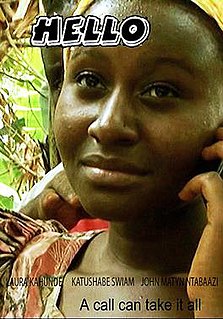 Hello is a Ugandan drama short film directed by John Martyn Ntabazi and written by Usama Mukwaya. The movie was made under the MNFPAC workshop and won the overall best short film. It debuted its screening at the 2011 Pearl International Film Festival. It is Usama's first screenplay.

Alexander Bagonza, better known by his stage name A Pass, is a Ugandan musician and songwriter. He was born in Uganda on 21 December 1989. A Pass states that his stage name comes from Alexander his last name and Pass from his picky nickname Percy.

Wuuyo is a song by Ugandan recording artist A Pass, released on March 20, 2015 as a single. It is on the official soundtrack of the Ugandan film, Bala Bala Sese.

Laura Kahunde is a Ugandan performing artist and Reality T.V Show Host. She Hosts Our Perfect Wedding Uganda, a reality show that follows Ugandan couples from the wedding preparations to the actual wedding day events. She also currently plays Jussy on Kyaddala, a pan-African story told through the lives of university friends exploring sexual reproductive health, rights and challenges, among other social issues and; Catherine Musoke on Chapters series that shows on pearl Magic Prime. She portrayed the character Angella Byekwaso on the famous NTV Second Chance She is known to have starred in Mariam Ndagire's films Hearts in Pieces alongside Abby Mukiibi Nkaaga, Dear mum and most recently my husbands wife Where We Belong, and Dear Mum with Mariam Ndagire herself. She also starred in the Usama Mukwaya's Hello that won her the best actress in the 2011 MNFPAC students awards. She recently appeared in a Henry Ssali film Bullion with her sister Juliana Kanyomozi She is confirmed to work with Usama Mukwaya again on his upcoming film Love Faces alongside Moses Kiboneka Jr. and Patriq Nkakalukanyi and a Douglas Dubois Sebamala film Black Glove.

Love Faces is a Ugandan drama thriller film written and directed by Usama Mukwaya. It is Mukwaya's feature film directorial debut, and stars Laura Kahunde, Moses Kiboneka Jr., Patriq Nkakalukanyi and Salome Elizabeth in leading roles. The film had a special screening on 31 August 2017 at the Uganda Film Festival 2017. It had its official release on 4 January 2018.

Robert Tamale known popularly as Bobby Tamale is a Ugandan film actor and producer. He broke through his acting career through "It Can't Be", a TV drama Airing on WBS TV. He has also starred with his first lead role as Davis in the 2016 Ugandan film The Only Son. He is also the executive producer of the movie. The film was nominated in six categories at the 2016 Uganda Film Festival including Best Screenplay, Best Sound, Best Editing, Film of the Year, Best lead Actor and Best Feature Film. Bobby has also been Executive producer to Tiktok and Love Faces (film) both directed by Usama Mukwaya.

Rehema is 2017 Ugandan film directed by Allan Manzi based upon a screenplay by Usama Mukwaya starring Juliet Zansaanze, Raymond Rushabiro and Ismael Ssesanga. The film premiered at the 38th Durban International Film Festival in South Africa. It held a special screening at the 4th Edition of the Euro-Uganda Film Festival on 17 June 2018 courtesy of the British Council.

Alex Ireeta Nabudere is a Ugandan Film editor and cinematographer.

Abdullah Muhammad Mukwaya is a Ugandan teacher and religious leader who is the current District Qadi of Mbarara District under the Ankole-Kigezi region.

Kyaddala is a Ugandan drama television series by Reach a Hand Uganda. The first season was produced by Emmanuel Ikubese Films and Reach a Hand Uganda. Set in a present day high school life, Kyaddala a Luganda word for "It's Real", focuses on real life social issues that affect young people across Africa and their attempts to overcome those issues. The series features actors and actresses from Uganda, Kenya, Rwanda, and Nigeria. Kyaddala premiered on 27 September 2019 at Kingdom Kampala.

The Blind Date is a 2021 Ugandan film written and directed by Loukman Ali starring Martha Kay, Michael Wawuyo Jr. and Raymond Rushabiro. The short film marks the second collaboration between Usama Mukwaya and Loukman Ali after Kyaddala TV Series which was released in 2019. The Blind Date is the first of the numerous episodes meant to make an anthology, with the follow-up episode already in the making. The film won Best short film at the 8th Uganda Film Festival awards. It had its African premiere at the 24th Zanzibar International Film Festival.

Loukman Ali is a Ugandan cinematographer, screenwriter, film director, producer and Graphic Designer. His directorial debut was Monday followed up by The Bad Mexican, released in 2017.The film was nominated in various festival including the Amakula International film festival. His other major films include The Girl in a Yellow Jumper, The Blind Date and Sixteen Rounds. He is known to frequently working with actor Michael Wawuyo Jr. and filmmaker Usama Mukwaya.

Sixteen Rounds is a 2021 Ugandan film written and directed by Loukman Ali starring Michael Wawuyo Jr. and Natasha Sinayobye. The short film premiered on YouTube on September 16, 2021 and marks the second installment to The Blind Date, an anthology of short films between Usama Mukwaya and Loukman Ali. The film's sound track is designed by long time collaborator, Andrew Ahuura and features songs by Keneth Mugabi and Fred Masagazi.