The novel is based in the year 2020 and aboard a new unsinkable cruise ship Titanic, named for the RMS Titanic . This novel continues where the previous left off, with much of the world's population having been destroyed by an incurable disease named the "Red Death".

Jimmy and Claire are on shore looking for stories for the ship's newspaper and in the course of events they miss the tender back to the ship. Claire manages to get back on board and Jimmy, having failed to do so, decides to travel down the coast to the ship's next port of call.

What follows is an adventure thriller, with the emphasis on the adventure, of the highest calibre. The plotting was supremely interesting, taking me to places I certainly didn't expect – even to the slightly surreal by the end.

The novel was well received by reviewers.

Simon Barrett, for Just Imagine, called the novel "a fast-paced, emotionally charged adventure"; that he found Bateman's "cinematic descriptions, cliffhanging moments of danger and last minute reprieves as well as the central dynamic between the characters Jimmy and Claire make this book a compulsive read"; concluding "Cannibal City is a great sequel for young adult readers aged 9+. Readers who have read the first book will not be disappointed". [3] Everyone's Reading, for the SLA, called the novel "an engrossing, futuristic tale which is absolutely impossible to put down". [4] John Lloyd, for The Bookbag, praised Bateman's writing style; "so vivid, so sprightly, so lively"; his rendition of teenage interaction; "so sharp and dryly sarcastic"; and his character development; "I cannot think of any character being introduced to a novel as effectively". Lloyd concluded by awarding the novel a five out of five star rating, stating "for teens wanting a future, post-catastrophe epic, that has a twinge of borrowing from classic films but provides a most novel novel instead, I can think of no better purchase". [2] 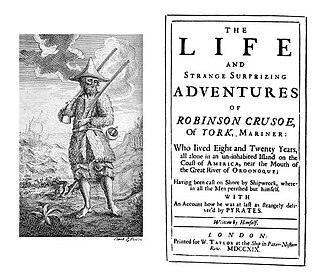 A Night to Remember is a 1955 non-fiction book by Walter Lord that depicts the sinking of the RMS Titanic on 15 April 1912. The book was hugely successful, and is still considered a definitive resource about the Titanic. Lord interviewed 63 survivors of the disaster as well as drawing on books, memoirs, and articles that they had written. In 1986, Lord authored his follow-up book, The Night Lives On, following renewed interest in the story after the wreck of the Titanic was discovered by Robert Ballard.

Ishmael is a character in Herman Melville's Moby-Dick (1851), which opens with the line, "Call me Ishmael." He is the first person narrator in much of the book. Ishmael plays a minor role in the plot, however, and early critics of Moby-Dick assumed that Captain Ahab is the protagonist. Many either confused Ishmael with Melville or overlooked the role he played. Later critics distinguished Ishmael from Melville, and some saw his mystic and speculative consciousness as the novel's central force rather Captain Ahab's monomaniacal force of will. 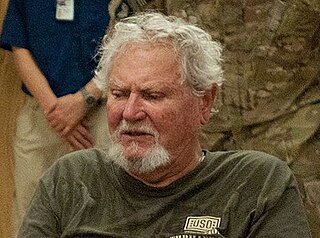 Clive Eric Cussler was an American adventure novelist and underwater explorer. His thriller novels, many featuring the character Dirk Pitt, have reached The New York Times fiction best-seller list more than 20 times. Cussler was the founder and chairman of the National Underwater and Marine Agency (NUMA), which has discovered more than 60 shipwreck sites and numerous other notable underwater wrecks. He was the sole author or lead author of more than 80 books.

Dirk Pitt is a fictional character created by American novelist Clive Cussler and featured in a series of novels published from 1976 to 2019. Pitt is a larger-than-life hero reminiscent of pulp magazine icon Doc Savage. Pitt is a citizen of the United States, on loan from the United States Air Force with the rank of Major, after serving in Vietnam as a pilot. He manages to find adventure with his childhood best friend, Al Giordino, despite ending up with an ostensibly desk-bound role as the head of the National Underwater and Marine Agency. Pitt has a commanding presence, a quick wit, and a considerable collection of classic cars. 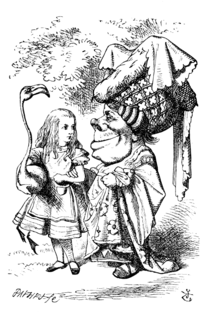 The Duchess is a character in Lewis Carroll's Alice's Adventures in Wonderland, published in 1865. Carroll does not describe her physically in much detail, although as stated in Chapter 9, "Alice did not much like keeping so close to her: first, because the Duchess was very ugly; and secondly, because she was exactly the right height to rest her chin upon Alice’s shoulder, and it was an uncomfortably sharp chin." Her hideous appearance and short stature is strongly established in the popular imagination thanks to John Tenniel's illustrations and from context it is clear that Alice finds her quite unattractive. 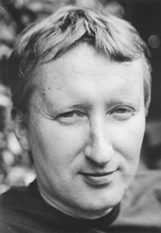 Colin Bateman is a novelist, screenwriter and former journalist from Bangor, County Down, Northern Ireland.

Tarzan and the Castaways is a collection of three stories by American writer Edgar Rice Burroughs, the last in his series of twenty-four books about the jungle hero Tarzan. The title novella, and the two short stories were first published in pulp magazines in 1940 and 1941. The combined book was published first as a hardcover by Canaveral Press in early 1965, and as a paperback by Ballantine Books in July 1965.

Grant Gillespie is an English novelist, screenwriter and actor who lives in W1, London.

Wildwood: The Wildwood Chronicles, Book 1 is a 2011 children's fantasy novel by The Decemberists' Colin Meloy, illustrated by his wife Carson Ellis. The 541 page novel, inspired by classic fantasy novels and folk tales, is the story of two seventh-graders who are drawn into a hidden, magical forest, while trying to rescue a baby kidnapped by crows. They get caught up in an epic struggle, and learn of their connection to a magical parallel world while confronting adult authorities who are often cowardly or dishonest. The natural beauty and local color of Portland, Oregon, features prominently in the book. 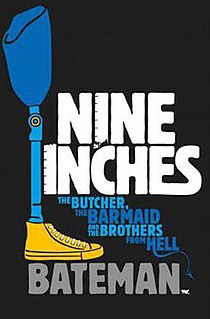 Nine Inches is the eighth novel of the Dan Starkey series by Northern Irish author, Colin Bateman, released on 13 October 2011 through Headline Publishing Group. Fellow crime author, Ian Rankin, recognised the book in The Scotsman as one of his "books of the year" 2011. It was also listed by author Nick Quantrill as one of his "Top 5 Books of 2011".

Murphy's Law is the first novel of the Martin Murphy series by Northern Irish author Colin Bateman, published on 13 October 2011 through Headline Publishing Group. The novel is adapted from the television series of the same name, created by Bateman and starring James Nesbitt.

Reservoir Pups is the first novel of the Eddie & the Gang with No Name trilogy by Northern Irish author, Colin Bateman, published on 13 November 2003 through Hodder Children's Books. It is Bateman's first young adult novel. 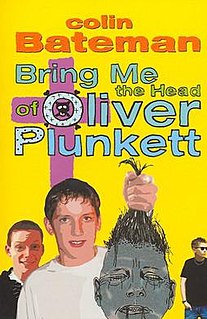 Bring Me the Head of Oliver Plunkett is the second novel of the Eddie & the Gang with No Name trilogy by Northern Irish author, Colin Bateman, published on 13 May 2004 through Hodder Children's Books.

Titanic 2020 is the first novel of the Titanic 2020 series by Northern Irish author, Colin Bateman, published on 19 July 2007 through Hodder Children's Books.

The SOS Adventures series is a trilogy of young adult novels written by Northern Irish author Colin Bateman, released between June 2010 and March 2011. The novels surround teenager Michael Monroe and his adventures with a team of international environmental rescue operatives, known as SOS. The first novel in the series was longlisted for the children's Northern Ireland Book Award 2010–11.

Climate fiction is literature that deals with climate change and global warming. Not necessarily speculative in nature, works may take place in the world as we know it or in the near future. The genre frequently includes science fiction and dystopian or utopian themes, imagining the potential futures based on how humanity responds to the impacts of climate change. Technologies such as climate engineering or climate adaptation practices often feature prominently in works exploring their impacts on society. Climate fiction is distinct from petrofiction which deals directly with the petroleum culture and economy. 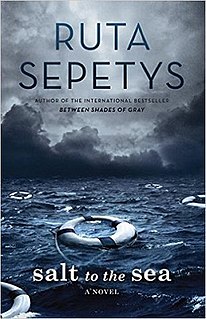 Salt to the Sea is a 2016 historical fiction young adult novel by Ruta Sepetys. It tells the story of four individuals in World War II who make their way to the ill-fated MV Wilhelm Gustloff. The story also touches on the disappearance of the Amber Room, a world-famous, ornately decorated chamber stolen by the Nazis that has never been recovered.