Tom Sherman (born August 5, 1947) is an American-Canadian artist working in video, [1] audio, radio, performance, sculpture and text/image. [2] [3] He is also a writer of nonfiction and fiction. He is a recipient of Canada's Governor General's Awards in Visual and Media Arts. [4] He is a professor of video art at Syracuse University.

Sherman was born in Manistee, Michigan. As a boy he was a committed naturalist, studying and collecting insects with a particular fascination for Lepidoptera (butterflies and moths). His public school education was complemented by his experimentation in amateur radio and electronics (he was licensed as WN8CES), shortwave listening and medium wave DXing. This early involvement with communications technologies evolved into cultural pursuits. He earned a BFA degree from Eastern Michigan University in 1970, majoring in sculpture.

In 1972 Sherman immigrated to Canada, and later became a Canadian citizen. He settled in Toronto and began working at A Space, one of the first artist-run centres in Canada. He established (with Lisa Steele) a video facility for artists at A Space from 1972 to 1975. Throughout the 1970s he developed and established his practice as a visual and media artist making and showing conceptual text-image works, [5] [6] [7] performance art and video art, [8] [9] and sculptural installations. [10]

During this time, he was also a regular on-air contributor to CBC Radio's Morningside with Peter Gzowski and As It Happens with Barbara Frum. From 1976 to 1978 he directed and edited scores of music videos for Nightmusic, a television talk show on the arts on TVOntario, Toronto. He also curated and produced Afterimage, a 13-week, half-hour program of experimental film and video art on TVOntario. In 1978 he was a researcher and writer for Fast Forward, a TVOntario series on the digital revolution, broadcast extensively on PBS in the USA.

After a brief stint as a visiting professor in 1979–1980 at the Nova Scotia College of Art and Design, in Halifax, he was a founding editor (with Clive Robertson and Lisa Steele) of Fuse Magazine in Toronto. Sherman represented Canada at Venice Biennale in 1980 in "Canada Video," curated by Bruce Ferguson of the National Gallery of Canada, featuring his video art along with video by Lisa Steele, Colin Campbell, General Idea, Pierre Falardeau and Julien Poulin. [11]

In 1981 Sherman moved to Ottawa, taking a position as Video Officer within the Visual Arts Section at The Canada Council. In 1983 he founded the Media Arts Section of The Canada Council, becoming its first Head of Section, and establishing Council's first grant programs for computer-integrated media. [12] That year the National Gallery of Canada mounted "Cultural Engineering", a ten-year survey of his video, installations and writing, curated by Willard Holmes. [13] [14]

In 1986 Sherman was appointed an International Commissioner for the Venice Biennale: Sherman, Don Foresta, Tomasso Trini and Roy Ascott curated a major exhibition of digital, network art called Ubiqua: Art, Technology and Informatics at the 1986 Venice Biennale. [15] In 1988-89 he worked with Simon Fraser University to develop and launch a research institute about digital technologies for the arts, the Centre for Image and Sound Research. In 1991 he was appointed Director of the School of Art at Syracuse University in central New York, USA. He continues to teach in the Department of Transmedia at Syracuse University, specializing in video art production and media art history.

In 1997 he founded Nerve Theory, a recording and performance duo with Viennese musician and composer Bernhard Loibner, and was an on-air contributor to many of radio art programs on Kunstradio, the Austrian Broadcasting Network, and other radio venues internationally from 1997 to 2018. [19]

Sherman began publishing essays and articles in 1972 and has published widely in magazines, print anthologies and web-publications. He has published six monographs, including two anthologies of his texts, Cultural Engineering (edited by Willard Holmes, National Gallery of Canada, Ottawa, 1983) and Before and After the I-Bomb: An Artist in the Information Environment (edited by Peggy Gale, Banff Centre Press, Alberta, 2002).

He has been active in the electronic digital network culture since the early 1980s, actively publishing and interacting on listservs and contemporary social media, including the video file-sharing websites YouTube and Vimeo. [20]

Jan Peacock is a Canadian interdisciplinary artist, curator and writer. 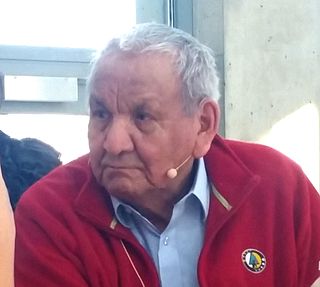 Alex Simeon Janvier, LL.D is a First Nation artist in Canada. As a member of the commonly referred to "Indian Group of Seven", Janvier is a pioneer of contemporary Canadian Aboriginal art in Canada.

Bill Vazan is a Canadian artist, known for land art, sculpture, painting and photography. His work has been exhibited in North America and internationally.

Micah Lexier is a Canadian artist and curator. He was educated at the University of Manitoba and the Nova Scotia College of Art and Design. He is represented by Birch Contemporary (Toronto). He lives and works in Toronto. In 2015 he was awarded the Governor General`s Award for excellence in the Visual Arts.

Suzy Lake is an American-Canadian artist based in Toronto, Canada, who is known for her work as a photographer, performance artist and video producer. Using a range of media, Lake explores topics including identity, beauty, gender and aging. She is regarded as a pioneering feminist artist and a staunch political activist.

Shary Boyle D.F.A. is a contemporary Canadian visual artist working in the mediums of sculpture, drawing, painting and performance art. She lives and works in Toronto.

Stephen Andrews is a Canadian artist based in Toronto. Born in 1956 in Sarnia, Ontario, Andrews is known for using various media to explore matters such as memory and loss, and technology, and its representations.

Ursula Johnson is a multidisciplinary Mi’kmaq artist based in Halifax, Nova Scotia, Canada. Her work combines the Mi’kmaq tradition of basket weaving with sculpture, installation, and performance art. In all its manifestations her work operates as didactic intervention, seeking to both confront and educate her viewers about issues of identity, colonial history, tradition, and cultural practice. In 2017 she won the Sobey Art Award.

Susan McEachern is an American/Canadian artist. McEachern is best known for her photography, which frequently includes text. Her work follows the feminist idea of "the personal is political," as she often combines images of her own life and personal space to investigate and comment on themes of socialization, gender, sexuality, and the natural world. McEachern has also been a professor at the Nova Scotia College of Art and Design University since 1979.

Carol Wainio is a Canadian painter. Her work, known for its visual complexity and monochrome color palette, has been exhibited in major art galleries in Canada, the U.S., Europe and China. She has won multiple awards, including the Governor General's Award in Visual and Media Arts.

Monica Tap is a Canadian painter, artist and educator. She lives in Toronto, Ontario, and teaches at the University of Guelph. She is known for engaging and challenging conventions concerning landscape and still-life painting.

Peggy Gale is an independent Canadian curator, writer, and editor. Gale studied Art History and received her Honours Bachelor of Arts degree in Art History from the University of Toronto in 1967. Gale has published extensively on time-based works by contemporary artists in numerous magazines and exhibition catalogues. She was editor of Artists Talk 1969-1977, from The Press of the Nova Scotia College of Art and Design, Halifax (2004) and in 2006, she was awarded the Governor General's Award in Visual and Media Arts. Gale was the co-curator for Archival Dialogues: Reading the Black Star Collection in 2012 and later for the Biennale de Montréal 2014, L’avenir , at the Musée d’art contemporain de Montréal. Gale is a member of IKT, AICA, The Writers' Union of Canada, and has been a contributing editor of Canadian Art since 1986.

Diana Thorneycroft is a Canadian artist based in Winnipeg, Manitoba, whose work has exhibited nationally and internationally. Thorneycroft works primarily in photography, drawing, and sculpture/installation. Her work blurs the lines between gendered bodies by employing phalluses.

Nell Tenhaaf is a Canadian artist, teacher, writer and feminist.