Tom Tully (died 2013) was a noted British comic writer mostly of sports and action stories. He was the longest-running writer of the popular football-themed strip Roy of the Rovers , which he wrote for much of Roy Race's playing career until the weekly comic closed in 1993.

From 1963 to 1970, Tully was the principal writer on Steel Claw for Valiant with artist Jesús Blasco, taking over for the fourth serial from Ken Bulmer, and later returning from 1971 to 1973 for the sequel strip, Return of the Claw. He also worked on Kelly's Eye and Janus Stark , and wrote Heros the Spartan with art by Frank Bellamy for Eagle . According to the first printing Paul Scoones's The Comic Strip Companion (2012), Tully was also regular writer on the Doctor Who strip in TV Comic prior to 1966; however subsequent research suggests that the author had confused Tully with another comics writer of this period, Thomas Woodman.

In the 1970s and '80s, he worked on Johnny Red for Battle Picture Weekly . He worked on many 2000 AD projects including Dan Dare , and the sports-related Harlem Heroes and Mean Arena . He also created The Mind of Wolfie Smith for Tornado, which later transferred to 2000 AD.

Tully retired to Wiltshire in the West Country. He died in Autumn 2013. [2] 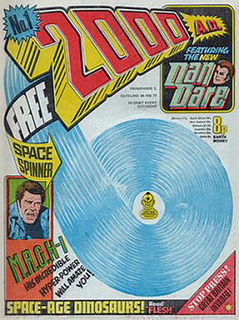 Dan Dare is a British science fiction comic hero, created by illustrator Frank Hampson who also wrote the first stories. Dare appeared in the Eagle comic story Dan Dare, Pilot of the Future from 1950 to 1967, and dramatised seven times a week on Radio Luxembourg (1951–1956).

Ian Gibson is a British comic book artist, best known for his 1980s black-and-white work for 2000 AD, especially as the main artist on Robo-Hunter and The Ballad of Halo Jones, as well as his long run on Judge Dredd.

Tharg the Mighty or The Mighty One is the fictional editor of the British science fiction comic 2000 AD. The character was introduced on the cover of the first issue in 1977 and is one of only two characters to appear in almost every issue of the comic, the other being Judge Dredd. Tharg rarely appears in stories but strips involving him have been written by such notable writers as Alan Grant, Alan Moore and John Wagner, albeit usually credited to "TMO" - "The Mighty One". 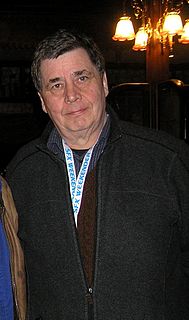 Tornado was a short-lived weekly British comic magazine published for 22 issues by IPC Magazines between March 1979 and August 1979. After the cancellations of the Starlord and Action titles, IPC launched Tornado as a way to use up stories already commissioned for the other titles. Originally to be called Heroes, like Action it was a mixed title featuring war, detective, horror, and science fiction stories. Its first editor was Kelvin Gosnell, who was followed by Dave Hunt. Tornado was printed on the same low quality newsprint stock used by 2000 AD and also had five stories of four to six pages per issue. The title also had a "superpowered" editor, like Tharg, "Big E," who was portrayed in photo-strips by a rather portly Dave Gibbons.

Massimo Belardinelli was an Italian comic artist best known for his work in the British science fiction comic 2000 AD.

Tiger was a British comic magazine published from 1954 to 1985, originally by Amalgamated Press and later by IPC/Fleetway.

The Steel Claw was one of the most popular comic book heroes of British weekly adventure comics of the 1960s and 1970s. The character was revived in 2005 for Albion, a six issue mini-series published by the Wildstorm imprint of DC Comics.

Valiant was a British boys' adventure comics anthology which ran from 1962 to 1976. It was published by IPC Magazines and was one of that company's major adventure titles throughout the 1960s and early 1970s.

Steve MacManus is a British comic writer and editor, particularly known for his work at 2000 AD.

Michael Coulthard is a British writer and psychedelic artist who best known for his work as a comic and graphic artist under the pseudonym Shaky Kane, as well as Shaky 2000.

Vulcan was a weekly British comic book magazine published by Fleetway and Swiss publisher Gevacur from 1975 to 1976.

Eric Bradbury was a British comic artist who primarily worked for Amalgamated Press/IPC from the late 1940s to the 1990s.

Jesús Redondo Román is a Spanish comic artist who has been published in many countries, including Spain, the UK, the Netherlands, Sweden and the United States.

Mike Western was a British comics artist. He worked as a clean-up artist for GB Animation after military service in the Second World War, and later at Halas and Batchelor on their 1954 film adaptation of Animal Farm. In the early 1950s he joined fellow former GB Animation artists Ron ''Nobby'' Clark and Eric Bradbury at Amalgamated Press, drawing adventure strips for Knock-Out, including the western Lucky Logan and the aviation series Johnnie Wingco.

David Pugh is a British comics artist best known for his work on Sláine at 2000 AD.