Werme calls football and basketball for the Big Ten Network [2] and has done similar roles with the ESPN family, Fox Sports South, and Raycom Sports. [3] He is also the sideline reporter and the pregame/halftime/postgame host for Oklahoma City Thunder telecasts and performed the same position with the Charlotte Bobcats.[ citation needed ] He has also done games for Fox College Sports. [4] [ failed verification ] In 2009 in his NBA debut, Werme said, "I'm very excited to be back in the NBA, especially with an organization and that is young and fresh with a bright future." [5] He works with studio analyst Elissa Walker Campbell, play-by-play man Brian Davis, TV color analyst Grant Long, and radio broadcaster Matt Pinto as part of the crew of Oklahoma City Thunder broadcasts. He calls Charlotte Hounds games for ESPN3 along with college football, basketball, and NBA basketball and is employed by the PGA Tour Radio on PGA.com. [6] Werme is a graduate of Syracuse University [3] 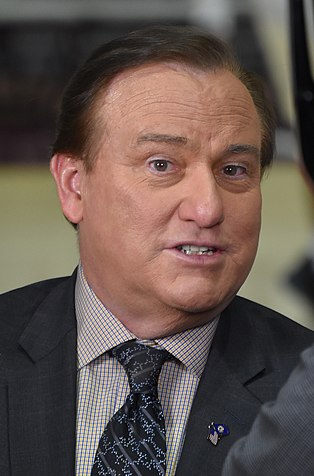 Tim Brando is an American sportscaster with CBS Sports and Fox Sports. Formerly with Raycom Sports, ESPN and SiriusXM, Brando has primarily covered NCAA football, basketball and the NBA. Along with radio duties, Brando has also served as a studio host for games, a play-by-play announcer, and halftime host.

Terrance Patrick Gannon is a sportscaster for NBC Sports and the Golf Channel, currently announcing golf and figure skating. Gannon has announced a wide variety of sporting events and has been called one of the "most versatile" announcers in TV sports and "the man who knows every game".

Tim Brant is a retired American sportscaster. Brant most recently worked for Raycom Sports and was formerly Vice President, Sports for WJLA-TV in Washington, DC. He has spent more than thirty years covering sports nationally, including for CBS and ABC.

Raycom Sports is an American producer of sports television programs. It is headquartered in Charlotte, North Carolina, and owned and operated by Gray Television.

Big Ten Network (BTN) is an American sports network based in Chicago, Illinois. The channel is dedicated to coverage of collegiate sports sanctioned by the Big Ten Conference, including live and recorded event telecasts, news, analysis programs, and other content focusing on the conference's member schools. It is a joint venture between Fox Sports and the Big Ten, with Fox Corporation as 51% stakeholder and operating partner, and the Big Ten Conference owning a 49% stake. It is headquartered in the former Montgomery Ward & Co. Catalog House building at 600 West Chicago Avenue in Chicago.

Brian Anderson is an American sportscaster. Since 2007, he has called play-by-play for the Milwaukee Brewers' telecasts on FSN Wisconsin. As a part of his work on the 2007 Brewers Preview Show, Anderson and the FSN team were awarded a regional Emmy Award.

Rich Waltz is an American television play-by-play commentator. A three time Emmy winner, Waltz is best known for calling television broadcasts for the Miami Marlins of Major League Baseball from 2005 to 2017. In November 2017, Waltz's dismissal by Fox Sports Florida and the Marlins was criticized by fans and media. Currently, Waltz calls MLB for MLB Network and Turner Sports, and he also announces College Football and Basketball for CBS Sports and CBS Sports Network. This September on TBS Waltz called the Cubs' Alec Mills no-hitter, the sixth MLB no-hitter he has announced. Waltz also called the 2020 AL Wild Card Series for TBS along side Jimmy Rollins. In the 2019 NCAA Super Regional on ESPN, he called the epic 19 strikeout no-hitter by Vanderbilt's Kumar Rocker.

Fox Sports Kansas City (FSKC) is an American regional sports network owned by Diamond Sports Group, and operates as an affiliate of Fox Sports Networks. The channel broadcasts coverage of professional, collegiate, and high school sports events both within and outside the Kansas City area. It maintains offices and master control operations at Kauffman Stadium in Kansas City, Missouri.

Eric Collins is a play-by-play sports announcer, currently the voice of the NBA's Charlotte Hornets on Fox Sports South. 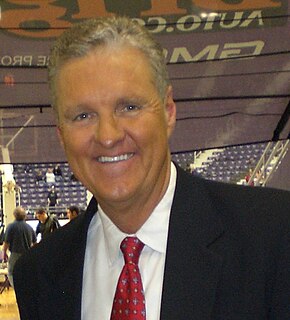 Dave Armstrong is an American television sports announcer for professional and college sports. He spent nine years as the play-by-play announcer for two Major League Baseball teams, in the NFL he has worked with both the Seattle Seahawks and the Kansas City Chiefs broadcasting regular and pre-season games and also announced several games for the NBA’s Denver Nuggets. He broadcasts Big 12 college basketball games for ESPN Regional Television and has been calling games in this conference since 1988. His signature “Wow!” is known as the exclamation mark on exceptional plays.

ESPN College Basketball on ABC is the branding formerly used for broadcasts of NCAA Division I college basketball games produced by ESPN, and televised on the American Broadcasting Company (ABC).

Ron Thulin is a sportscaster who currently works for Stadium and Fox Sports Net. He was formerly with Turner Sports.

Tom Hart is a television announcer for ESPN. He attended Rock Bridge High School in Columbia, Missouri and is a graduate of the University of Missouri. Hart lives in Atlanta.

ACC Network (ACCN) is an American multinational subscription-television channel owned and operated by ESPN Inc. Dedicated to coverage of the Atlantic Coast Conference, it was announced in July 2016 and launched on August 22, 2019. The channel operates from ESPN's headquarters in Bristol, Connecticut, though some programming and staff is in Charlotte, North Carolina.