The Charlotte Hounds were a Major League Lacrosse (MLL) field lacrosse franchise on hiatus until 2021 that began play in the 2012 MLL season and played their home games at American Legion Memorial Stadium. [1]

In January 2011 the MLL voted to grant expansion franchises to Charlotte and Columbus, Ohio for the 2012 MLL Season. [1] [2] The team's first hire was Wade Leaphart, also a former Charlotte Bobcat, who was instrumental in establishing the team's identity, sales, marketing and operations, among other things. McPhilliamy and Leaphart launched a Name the Team Campaign, sponsored by OrthoCarolina, the official team physician of the Hounds, and was heavily run via social media – Facebook. First, fans pitched in ideas for the team name and location identity (Charlotte, Carolina, Queen City, etc.) Then, fans voted on the location ID, choosing Charlotte easily over Carolina. The next stage was mostly on the team staff, in choosing 6 finalists for team names and logo prototypes. Fans then voted on those, narrowing it down to the final three, Hounds, Legion, and Monarchs. A final vote was held, and Hounds won by a mere 21 votes over the Legion. On June 21, 2011, the team name was announced to be the Charlotte Hounds and their colors to be royal and tan. On September 29, 2011, the team announced the hiring of head coach Mike Cerino. On February 10, 2012, the team announced the hiring of assistant coaches J.B. Clarke, Chris Phenicie, and Brad Touma.

The Hounds announced on February 7, 2012, that they had signed a landmark deal with WMYT (MyTV12) Charlotte to broadcast 7 of the 14 scheduled games. The TV broadcasts will alternate with the Radio games on WFNZ, with the exception of the home opener and season finale, which will be covered by both stations. WFNZ will air all home games, while WMYT will broadcast the away games as well as the home opener and season finale. The local TV deal with WMYT is the first of its kind in major league lacrosse, as WMYT will be the only local broadcast station in the nation to offer Major League Lacrosse Broadcasts. [3]

On May 12, 2012, the Charlotte Hounds beat the Ohio Machine 18–15 at American Legion Memorial Stadium to earn their first win in franchise history.

On August 3, 2013, the Charlotte Hounds clinched a playoff spot in just their second season after defeating the Hamilton Nationals, 14–11. [4] On August 24 in the semifinals, Charlotte defeated top seed Denver, 17–14 for their first playoff win and championship berth in team history. [5] Before that, the Denver Outlaws were the first team in league history to complete a perfect 14–0 regular season. On August 25, the Hounds took on the Chesapeake Bayhawks in the Steinfeld Cup. The Hounds lost 10–9 to the Bayhawks, who won their league-record fifth championship.

Before the 2016 season, the Hounds announced head coach Mike Cerino would move to general manager, a role held by Leaphart since 2012. Jim Stagnitta was hired as the team's new head coach. They started the year out with three straight home games against the Boston Cannons, Rochester Rattlers, and Florida Launch. As a result, the team got off to a 3–0 start for the first time in franchise history.

On August 6, the Hounds came back from an 11–6 deficit to defeat the Chesapeake Bayhawks, 15–13 to clinch not only their second playoff berth in franchise history, but their first winning record in franchise history at 8–6. On August 13 in Minnesota, the Hounds' season would be ended after a 16–10 loss to the top-seeded Ohio Machine.

In 2017, things would hit a speed bump. The Hounds would get off to an 0–3 start thanks to two meetings with the defending champion Outlaws. Despite being able to win five of their next eight and put themselves in the top four in the league, the Hounds were not able to finish the season strong. Charlotte posted a 6–8 record in their 2017 campaign, finishing in seventh place. One highlight from the year including drafting of Maryland attackman Matt Rambo, who led the Terrapins to their first NCAA championship since 1975 and won the 2017 Tewaaraton Award. [7]

The Hounds began the 2018 campaign at home against the Boston Cannons. Charlotte scored 16 of the first 17 goals, setting many team records in a 25–7 win including most goals in a game, largest margin of victory, and tied the team record for fewest goals allowed in a game. [8] Head coach Jim Stagnitta became the team's all-time leading wins leader on June 9 with a 19–13 victory over Atlanta. [9]

Despite the hot start, Charlotte would fizzle down the stretch. Charlotte played their last "home game" on June 30 against the Atlanta Blaze at MUSC Health Stadium in Charleston, South Carolina, also the site of the year's championship game. They lost the game, 16–10. Charlotte played the Cannons in their last game of the season and lost, 14–7, a point differential of 25 goals compared to Week 1's 25–7 thumping. The Hounds were eliminated that week from postseason contention.

Major League Lacrosse (MLL) was a men's field lacrosse league in the United States. The league's inaugural season was in 2001, making MLL the oldest professional field lacrosse league in North America. Teams have played anywhere from ten to 16 games in a summertime regular season. This is followed by a four-team playoff for the championship trophy, the Steinfeld Trophy, named after founder Jake Steinfeld. League attendance peaked at 6,417 in 2011 and the 2019 average was 4,587.

The Chesapeake Bayhawks were a Major League Lacrosse (MLL) professional men's field lacrosse team based in Annapolis, Maryland since 2010. They have played in the greater Baltimore metro area since the MLL's inaugural 2001 season, as the Baltimore Bayhawks from 2001–2006 and as the Washington Bayhawks from 2007–2009.

The Cannons Lacrosse Club are a Premier Lacrosse League (PLL) professional men's field lacrosse team formerly based in Boston, Massachusetts. They played in Major League Lacrosse (MLL) from their inaugural 2001 season up until the league merged with PLL and won two Steinfeld Cup championship games. The team's home field was Veterans Memorial Stadium in nearby Quincy.

The Denver Outlaws were a Major League Lacrosse professional men's field lacrosse team based in Denver, Colorado, United States. They began playing in the MLL in 2006 as an expansion team.

Joshua S. Sims is an American former professional lacrosse player. He played in Major League Lacrosse through 2013 and last played box lacrosse in the National Lacrosse League with the Philadelphia Wings in 2010. He starred as a member of the Princeton Tigers men's lacrosse team from 1997 through 2000. He is a two-time NCAA champion, three-time MLL champion, and one-time NLL champion.

The 2008 Major League Lacrosse season was the eighth season of the league. The season began on May 17, 2008, and concluded with the championship game on August 24, 2008.

The Ohio Machine were a Major League Lacrosse (MLL) professional men's field lacrosse team based in Obetz, Ohio. They first played in the 2012 MLL season and continued through the 2018 season. 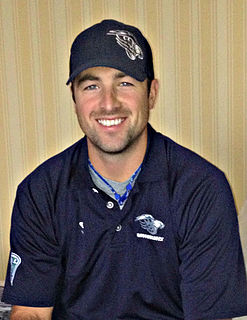 Steven Brooks is a professional lacrosse player that retired from the Atlas LC (PLL) of Premier Lacrosse League in 2019. Brooks was the 6th overall draft pick in the 2008 Major League Lacrosse Collegiate Draft by the Chicago Machine. He played high school lacrosse for Libertyville High School in Libertyville, Illinois. He also attended a postgraduate year at Bridgton Academy. Brooks played college lacrosse at Syracuse University. In January 2020, Brooks was named assistant coach of the Atlas LC (PLL) in the professional lacrosse league PLL. He is the first ever PLL player turned coach in the league's history.

The Florida Launch were a professional men's field lacrosse team based in Boca Raton, Florida. They joined Major League Lacrosse (MLL) as an expansion team for the 2014 season until 2019. The team played its home games at Florida Atlantic University Stadium. The team was owned by Jim Davis, founder and chairman of New Balance, an early investor in the MLL.

The Atlanta Blaze were a professional men's field lacrosse team in Major League Lacrosse (MLL). The Blaze became the ninth team in MLL as an expansion team for the 2016 season and played its home games at Atlanta Silverbacks Park in Atlanta, Georgia.

The 2016 Major League Lacrosse season was the 16th season of Major League Lacrosse. The season featured 9 teams after the addition of the Atlanta Blaze via expansion. It was the first season since 2008 that the league fielded more than eight teams. The defending champion New York Lizards are coming off their third Steinfeld Cup victory in franchise history and first since 2003 after defeating the Rochester Rattlers 15–12 August 8, 2015 at Fifth Third Bank Stadium in Kennesaw, Georgia. On August 20, the Denver Outlaws won their second Steinfeld Cup trophy in three years, coming back to defeat the Ohio Machine, 19–18.

The 2017 Major League Lacrosse season was the 17th season of Major League Lacrosse. Featuring the same nine teams as 2016, the season began on April 22. All four games played on opening weekend were won by the road team and decided by one goal, two in overtime. The season culminated in the championship game on August 19 in Frisco, Texas at The Ford Center at The Star. In a rematch of the 2016 championship game, the Ohio Machine defeated the Denver Outlaws 17–12, capturing their first Steinfeld Cup in franchise history.

The 2018 Major League Lacrosse season is the 18th season of Major League Lacrosse. The season began on Saturday, April 21 with three games. For the third straight year, the league consists of nine teams playing 14 games each. However, the league announced on November 16, 2017 that the Rochester Rattlers, one of the league's four remaining charter franchises, would relocate to Frisco, Texas and become the Dallas Rattlers. The reigning champions for the first time are the Ohio Machine, who would take a hard fall and finish 3-11 in 2018. The season culminated on Saturday, August 18 with the Denver Outlaws hoisting their third Steinfeld Trophy in Charleston, South Carolina at MUSC Health Stadium after defeating the Rattlers, 16-12.

The 2019 Major League Lacrosse season was the 19th season of Major League Lacrosse. The regular season began on Friday, May 31 and ended on Sunday, September 22. It was the first time the league would ever begin its season after Memorial Day, allowing all players selected in the collegiate draft to play a full season. 2019 also marks the first time each team would play 16 games. The league has played a 14-game schedule since 2012. Additionally, the league returned to a Championship Weekend format instead of a two-week postseason for the first time since 2013. Championship Weekend was hosted in Denver with two semifinal games on Friday, October 4 and the 19th Steinfeld Cup was hosted at Dick's Sporting Goods Park October 6 on ESPN2.

The 2019 Dallas Rattlers season was the seventeenth season for the Rattlers franchise of Major League Lacrosse, and second season playing in Frisco, Texas since relocating from Rochester, New York.

The 2019 Denver Outlaws season was the fourteenth season for the Outlaws franchise of Major League Lacrosse. It was also the first season under head coach Tony Seaman, who previously served as general manager before B.J. O'Hara took the head coaching job for the New York Lizards. The Denver Outlaws had a very strong team, having 7 players go to the All Star game.

The Connecticut Hammerheads were a Major League Lacrosse (MLL) professional men's field lacrosse team based in Fairfield, Connecticut. The team played for one season during the 2020 season. The team's home field was Rafferty Stadium located on the campus of Fairfield University.

The 2020 Major League Lacrosse season is the 20th season of Major League Lacrosse. Each of the six teams were slated to play a ten-game regular season starting on May 30, until the COVID-19 pandemic suspended the season. On July 2, the league announced teams would play a five-game regular season over the course of a quarantined week in Annapolis, Maryland at Navy-Marine Corps Memorial Stadium, the home of the Chesapeake Bayhawks. The regular season is scheduled to begin play on Saturday, July 18 with a four-team postseason the next weekend on July 25–26.