In 1894, a French newspaper organised a race from Paris to Rouen and back, starting city to city racing. [1] In 1900, the Gordon Bennett Cup was established. Closed circuit racing arose as open road racing, on public roads, was banned.

Aspendale Racecourse in Australia in 1906 was the first dedicated motor racing track in the world. [2]

Motorsports ultimately became divided by types of motor vehicles into racing events, and their appropriate organisations.

Motor racing [5] is the subset of motorsport activities which involve competitors racing against each other.

Formula racing is a set of classes of motor vehicles, with their wheels outside, and not contained by, any bodywork of their vehicle. These have been globally classified as specific 'Formula' series - the most common being Formula One, and Formula Two. Many others include the likes of Formula 3, Formula Ford, Formula Renault and Formula Palmer Audi. However, in North America, the IndyCar series is the most followed open-wheeled racing series. Former 'Formula' series include Formula 5000, GP2 and GP3.

Formula One is a class of single-seat and open-wheel Grand Prix closed course racing, governed by the Fédération Internationale de l'Automobile (FIA), and currently organized by the privately owned company Formula One Group. The formula regulations contain a very strict set of rules which govern vehicle power, weight, size, and design. The rules do allow for some variation, however. [6]

Formula E is a class of open-wheel auto racing that uses only electric-powered cars. The series was conceived in 2012, and the inaugural championship started in Beijing on 13 September 2014. [7] The series is also sanctioned by the FIA and races a spec chassis/battery combination with manufacturers allowed to develop their own electric power-trains. The series has gained significant traction in recent years. [8]

A series originated on June 12, 1909 in Portland, Oregon [9] at its first race. Shortly after, Indianapolis Motor Speedway opened in 1909 and held races that ranged from 50 to 200 miles. Its premier race is the Indianapolis 500 which began on May 11, 1911 and a tradition was born. Today, Indycar operates a full schedule with over 20 teams and 40 different drivers. The current schedule includes 15 tracks over the course of 17 races per season. [10] Scott Dixon was crowned current champion of the IndyCar Series in October 2020.

Enclosed wheel racing is a set of classes of vehicles, where the wheels are primarily enclosed inside the bodywork of the vehicle, similar to a North American 'stock car'.

Sports car racing is a set of classes of vehicles, over a closed course track, including GT sports cars, and specialized racing prototypes. The premiere race is the 24 Hours of Le Mans which takes place annually in France during the month of June. Sports car racing rules and specifications differentiate in North America from established international sanctioning bodies. [11]

Stock car racing is a set of vehicles that race over a speedway track, organized by NASCAR. While once stock cars, the vehicles are now purpose-built, but resemble the body design and shape of production cars. Bootleggers throughout the Carolinas are often credited for the origins of NASCAR due to the resistance during the prohibition. [12] Many of the vehicles were modified to increase top speed and handling, to provide the bootleggers with an advantage toward the vehicles local law enforcement would use in the area. [13] An important part to the modifications of stock cars, was to increase the performance of the vehicle while also maintaining the same exterior look giving it the name Stock car racing. Many legends in NASCAR originated as bootleggers in the Great Smoky Mountains of North Carolina like Junior Johnson. [14] Organized oval racing began on Daytona Beach in Florida as a hobby but quickly gained interest from all over the country. As oval racing became larger and larger, a group gathered in hopes to form a sanctioning body for the sport. [15] NASCAR was organized in 1947, to combine flat track oval racing of production cars. [16] Daytona Beach and Road Course was founded where land speed records were set on the beach, and including part of A1A. The highlight of the stock car calendar is the season-opening Daytona 500, also nicknamed 'The Great American Race' which is held at Daytona International Speedway in Daytona Beach, Florida. [17] NASCAR has now held over 2,500 sanctioned events over the course of 70 seasons. [15] Richard Petty is known as the king of NASCAR with over 200 recorded wins in the series and has competed in 1,184 races in his career. [18]

Off-road racing is a group of vehicles that specialize in off-road racing and are modified street cars that can race on close purpose-built off-road tracks and courses. Off-road racing is popular all over the world. Premier off-road events include the Dakar Rally and the Baja 1000 desert race. [20] Series like the National Off-Road Racing Association (NORRA) which was founded in 1967, sanctions events utilizing off-road vehicles racing through the Baja Desert. [21] The first event sanctioned by the organization was the 1967 Mexican 1000 rally that began in Tijuana and ended in La Paz.

Motor sports which involve competitors racing against each other include:

Racing events are governed by Race Officials. In preparation for the race, a Race Committee is formed, senior officials such as Race Director, Clerk of the Course, Chief Steward are established. Race Officials are typically members of the country's motorsport governing organization and represent its rules and regulations.

Throughout the racing event, Race Officials are responsible for logistics, supporting services, safety, participant scrutineering, race judging, arbitration, and any other decision making.

After the race, the Race Officials are responsible for resolving any issues that may have arisen during the race. Parties can appeal its decisions to the country's motorsport governing organization.

Motorsport was a demonstration event at the 1900 Summer Olympics.

The National Association for Stock Car Auto Racing, LLC (NASCAR) is an American auto racing sanctioning and operating company that is best known for stock car racing. The privately owned company was founded by Bill France Sr. in 1948, and his son, Jim France, has been the CEO since August 6, 2018. The company is headquartered in Daytona Beach, Florida. Each year, NASCAR sanctions over 1,500 races at over 100 tracks in 48 US states as well as in Canada, Mexico, and Europe.

An open-wheel car is a car with the wheels outside the car's main body, and usually having only one seat. Open-wheel cars contrast with street cars, sports cars, stock cars, and touring cars, which have their wheels below the body or inside fenders. Open-wheel cars are built both for road racing and oval track racing. Street-legal open-wheel cars, such as the Ariel Atom, are very scarce as they are often impractical for everyday use.

Stock car racing is a form of automobile racing found mainly and most prominently in the United States and Canada, with Australia, New Zealand, Mexico, Brazil and the United Kingdom also having forms of stock car auto racing. Traditionally, races are run on oval tracks measuring approximately 0.25 to 2.66 miles. The world's largest governing body for stock car racing is the American NASCAR, and its NASCAR Cup Series is the premier top-level series of professional stock car racing. Top-level races typically range between 200 and 600 miles in length. The cars were originally production models ("stock") but are now highly modified. 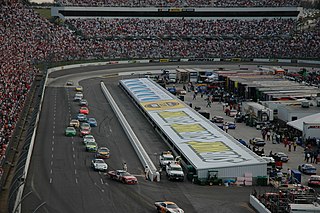 Oval track racing is a form of closed-circuit motorsport that is contested on an oval-shaped race track. An oval track differs from a road course in that the layout resembles an oval with turns in only one direction, and the direction of traffic is almost universally counter-clockwise. Oval tracks are dedicated motorsport circuits, used predominantly in the United States. They often have banked turns and some, despite the name, are not precisely oval, and the shape of the track can vary.

Ontario Motor Speedway was a motorsport venue located in Ontario, California. It was the first and only automobile racing facility built to accommodate major races sanctioned by all of the four dominant racing sanctioning bodies: USAC for open-wheel oval car races; NASCAR for a 500-mile (800 km) oval stock car races; NHRA for drag races; and FIA for Formula One road course races. Additionally, several motorcycle races were held at the track. Constructed in less than two years, the track opened in August 1970 and was considered state of the art at the time. 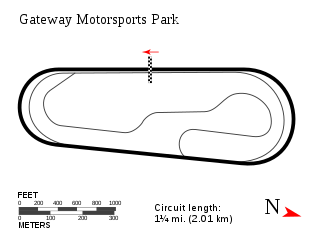 The ARCA Menards Series is an American stock car series, the premier division of the Automobile Racing Club of America (ARCA). It is considered a minor, semi-professional league of stock car racing, used as a feeder series into the three national touring series of NASCAR, and hosts events at a variety of track types including superspeedways, road courses, and dirt tracks. The series has a longstanding relationship with NASCAR, including using former NASCAR Cup Series cars, hosting events in the same race weekend such as Daytona Speedweeks, and naming an award after NASCAR founder Bill France, Sr. The series was not officially affiliated with NASCAR until its buyout on April 27, 2018. 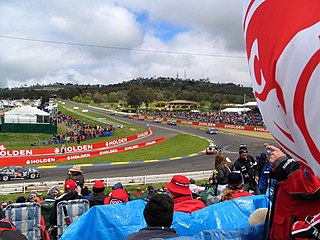 Race results from the automobile and motorcycle races contested at the Indianapolis Motor Speedway in Speedway, Indiana. Races have been held on seven different track configurations: 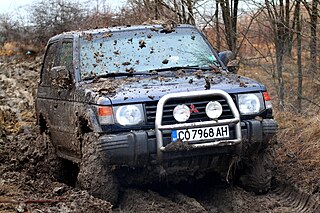 The following outline is provided as an overview of and topical guide to auto racing:

Motor sports are widely popular in the United States, but Americans generally ignore major international series, such as Formula One and MotoGP, in favor of home-grown racing series.

Motorsports are a popular non-physical sport competed in many countries worldwide, including in Canada. One of the most internationally significant Canadian events is the Montreal Grand Prix, a race for the Formula One World Championship. Ongoing since 1967, drivers Lance Stroll and Nicholas Latifi are the only Canadians to compete in the series as of 2020.

The COVID-19 pandemic has caused disruption to motorsport across the world, mirroring its impact across all sports. Across the world and to varying degrees, events and competitions have been cancelled or postponed.

Kristofer Cole Wright is an American racing driver. He competes part-time in the NASCAR Camping World Truck Series, driving the No. 02 Chevrolet Silverado for Young's Motorsports, and part-time in the NASCAR Xfinity Series, driving the No. 26 Toyota Supra for Sam Hunt Racing. He has also competed in sports car, open-wheel, Euroformula Open Championship, and the ARCA Menards Series.

The EchoPark Texas Grand Prix is a NASCAR Cup Series stock car race at Circuit of the Americas in Austin, Texas. Introduced in 2021, the race is one of seven road course dates on the Cup Series schedule.