The Karting World Championship is a kart racing competition organised by the CIK-FIA. It is held annually since 1964, and is karting's flagship event. The FIA (International Automobile Federation) created the CIK (International Karting Commission) in 1962.

In the 80s (from 1981 - 1989) the World Championship was raced with 135 cc Formula K karts. Before and after that period 100 cc direct-drive karts was the prevailing standard. In 2007, a change in regulations introduced the KF1 category carts, 125 cc karts equipped with electric starters, clutch and rpm limiters set at 16,000 rpm, to replace the Formula A karts. The 2010 edition was raced with KF2 karts where the engine rpm is limited at 15,000 rpm. [3]

The FIA Karting categories at the world championships are now divided into three main families: direct-drive karts, gearbox karts and Superkarts. All these karts have the technology in common of the 2-stroke engine. Since 2016 the new generation of Original Karts (OK) machines have taken over from the old KF engines. The top category OK at the World Championships is available for drivers from 14 years old in the year they participate. The OK Junior category is aimed at drivers aged between 12 and 14 years old. The gearbox categories KZ and KZ2 share the same specification except for chassis and brakes which are open in the KZ World Championship. The Superkart category is the most unusual discipline of Karting because it can only express itself fully on long racing tracks. With its complete bodywork and twin-cylinder 250 cc engines, developing nearly 100 hp, these Superkarts are capable of extraordinary performances.

In 2013 for the first time in its history CIK-FIA called a promoter, WSK Promotion, to perfect the organisation of the major international karting competitions. The Swiss RGMMC Group is now the Official Promoter of the FIA Karting European and World Championships for the period of 2018-2020 (with the exception of Superkart and Endurance). They try increasing the audience for Karting Competitions worldwide, attracting new partners and working closely with ASNs (National Federations), these are the priorities of RGMMC Group. They also develop the communication and media coverage of the events by providing live video viewing during the events and by partnering with Motorsport.tv for broadcast around the world.

Kart racing or karting is a variant of motorsport road racing with open-wheel, four-wheeled vehicles known as go-karts or shifter karts. They are usually raced on scaled-down circuits, although some professional kart racing are also raced in full-size motorsport circuits. Karting is commonly perceived as the stepping stone to the higher ranks of motorsports, with former Formula One champions such as Sebastian Vettel, Nico Rosberg, Ayrton Senna, Lewis Hamilton, Michael Schumacher and Fernando Alonso having begun their careers in karting.

OK-Junior is a kart racing class for top drivers aged 11 to 15.

KF2, is a kart racing class for top drivers aged 14 and up.

Superkart is a form of motorsport road racing in which the class is a racing vehicle sized like a kart but with several characteristics more strongly associated with open-wheel racing cars.

Mick Schumacher is a German racing driver, currently competing in the FIA Formula 2 Championship with Prema Theodore Racing and being affiliated to the Ferrari Driver Academy. He began his career in karting in 2008, progressing to the German ADAC Formula 4 by 2015. Mick most recently competed in the 2018 FIA F3 European Championship, which he won. He is the son of seven-time Formula One World Champion Michael Schumacher.

KZ1 is a kart racing class using 125 cc water-cooled two-stroke engines yielding approximately 46-50hp, equipped with a 6-speed gearbox. Technical regulations are similar to KZ2 except for the gearbox which can be either manual or electro-mechanical and the use of soft tires. Both engines and chassis must be approved by the CIK-FIA racing governing commission. It is open to top drivers aged 15 and over. Minimum weight is 170 kg (370 lb) with driver. They can accelerate from 0-100 KM/H in 3,5 seconds. KZ1 has a top speed of 180 km/h (110 mph).

KZ2 is a kart racing class using 125 cc water-cooled two-stroke engines yielding about 45 hp. The engines are equipped with a 6-speed gearbox. Technical regulations are similar to KZ1 except for the gearbox which must be "hand-operated and exclusively mechanical without a servo system", and the use of medium tires. Both the engine and chassis must be approved by the CIK-FIA racing governing commission. The class is open to drivers aged 15 and up with the minimum weight being 175kg, this includes the kart and driver.

Kazeem Manzur is a professional British racecar driver, who races for Josef Kaufmann Racing in the Formula BMW Europe series. In 2008, Manzur became the first ever British-Asian racing driver to compete on the undercard of an FIA Formula One World Championship event and he scored a podium finish at just his second single-seater event in a Formula BMW race at the Sepang International Circuit, Malaysia.

Karting Genk is a Kart racing track, located in Genk, a municipality located in the Belgian province of Limburg, near Hasselt.

KF1 is the top level of karting. It is open to the best drivers aged 15 and up.

Thomas Jäger is an Austrian racing driver, competing in the ATS Formel 3 Cup for Performance Racing.

Joey Hanssen is a Dutch racing driver. He currently races in the CIK Stars of Karting Series in the KZ2 class.

Max Emilian Verstappen is a Belgian-Dutch racing driver who competes under the Dutch flag in Formula One with Red Bull Racing. At the 2015 Australian Grand Prix, when he was aged 17 years, 166 days, he became the youngest driver to compete in Formula 1. He holds eight other "firsts" in Formula One racing.

Beitske Visser is a female racing driver from the Netherlands and a BMW Motorsport junior.

Kaan Önder, is a Turkish driver from Istanbul, Turkey. He is mentored by triple world champion Andy Priaulx. 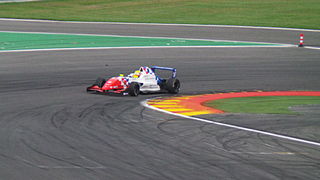 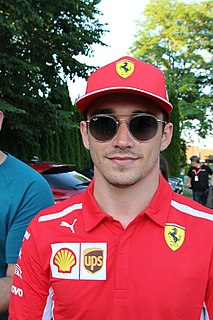 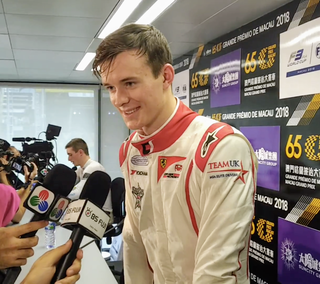 Arjun Maini is an Indian racing driver, competing in the FIA Formula 2 Championship with Campos Racing. 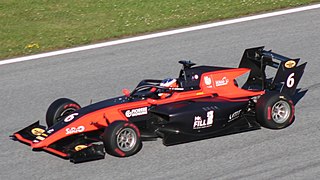 Richard Verschoor is a Dutch racing driver. He is a former Red Bull Junior Team member, reigning SMP F4 and Spanish F4 champion, where he won both single-seater championships in his debut year and is currently competing in the FIA Formula 3 Championship.