The wrestlers who subsequently entered professional sumo (or were former professionals) also have their ring name or shikona listed. 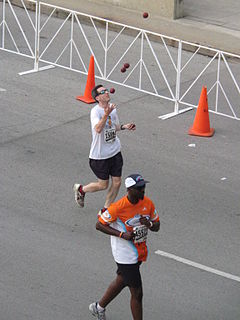 Joggling is a competitive sport that combines juggling with jogging. People who joggle are called jogglers.

Vanessa Ferrari is an Italian artistic gymnast. She was the 2006 World All-Around Champion and competed for Italy at the 2008, 2012, and 2016 Summer Olympics.