The World Curling Championships began in 1959 as the Scotch Cup. The Scotch Cup was created by Toronto public relations executive and former sports journalist Stanley D. Houston on behalf of the Scotch Whisky Association, a client of Houston's agency Public Relations Services Limited, which was looking to generate increased North American exposure for its products.[ citation needed ] The first three Cups were contested between men's teams from Scotland and Canada. The United States joined the Scotch Cup in 1961, and Sweden also joined the next year. Canada won the first six world titles, of which the legendary rink skipped by Ernie Richardson earned four. The United States was the first country to break Canada's streak, winning their first world title in 1965. By 1967, Norway, Switzerland, France, and Germany were added to the Scotch Cup, and Scotland won their first title, while Canada finished without a medal for the first time. The tournament was renamed the Air Canada Silver Broom the year after that, and Canada strung together five consecutive world titles starting in that year.

In 1973, the competing field was expanded to ten teams, and Italy and Denmark were introduced to the world stage. Sweden, Switzerland, and Norway won their first titles in the following years, and Canada continued to win medals of all colours. In 1979, the first edition of the women's World Curling Championships was held. The championships were held separately from the men's championships for the first ten years. During this time, Switzerland, Canada, Sweden, Denmark, and Germany won world titles.

In 2005, the men's and women's championships were separated, and an agreement was made between the World Curling Federation and the Canadian Curling Association that Canada would host one of the tournaments annually each year, all of which are title sponsored by Ford of Canada. Canada began a streak of top two finishes in the men's tournament, and China won their first world title in the women's tournament in 2009.

The World Curling Championships have been known by a number of different names over the years.

Until 2017 format of the world championships used a twelve team round-robin preliminary round, after which the top four teams advance to a knockout round held using the Page playoff system.

Starting in 2018 there are 13 teams playing round-robin preliminary round with top six advancing to a single-elimination knockout with top two receiving bye to the semifinals. [7] This includes two teams from the Americas zone, eight from the European zone (via the European Curling Championships) and three from the Asia-Pacific zone (via the Pacific-Asia Curling Championships). For 2019, the number of teams from the Asia-Pacific zone will be reduced by one, and there will also be one less team from the zone of the bottom-placed team at the 2018 championships. [8] The two slots will be allocated to teams from the new World Qualification Event. The qualification event will have eight teams: the host country, one team from the Americas, two from Pacific-Asia, and four from Europe.

Joseph Polo is an American curler who is best known for winning a bronze medal at the 2006 Winter Olympics and being the alternate on the gold-medal winning United States men's team at the 2018 Winter Olympics. Polo was raised in Floodwood, Minnesota before moving to Cass Lake. He learned to curl in nearby Bemidji at the age of 10 in the Bemidji Curling Club's Sunday Night Junior League. 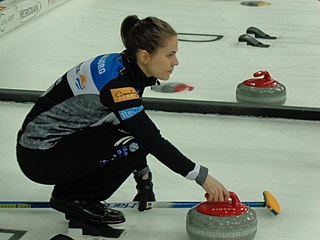 Alina Pätz is a Swiss curler. She currently throws fourth stones on Team Silvana Tirinzoni. She is a three time world champion and was the alternate player for the Mirjam Ott rink which represented Switzerland at the 2014 Winter Olympics.

Marc Pfister is a Swiss curler from Schalunen.

Norway competed at the 2018 Winter Olympics in PyeongChang, South Korea, from 9 to 25 February 2018. It was represented by 109 competitors in 11 sports.

Curling at the 2020 Winter Youth Olympics took place at the Palladium de Champéry in Champéry, Switzerland from 10 to 22 January 2020.

The 2021 World Women's Curling Championship was held 30 April to 9 May at the Markin MacPhail Centre at Canada Olympic Park in Calgary, Alberta.