Last updated October 15, 2019
Not to be confused with IFSC Climbing World Cup.

The IFSC Climbing World Championships are the biennial world championships for competition climbing organized by the International Federation of Sport Climbing (IFSC). This event determines the male and female world champions in the three disciplines of sport climbing: lead climbing, bouldering, and speed climbing. Since 2012, a Combined ranking is also determined, for climbers competing in all disciplines, and additional medals are awarded based on that ranking. [1] [2] [3] [4]

A climbing competition is usually held indoors on purpose built climbing walls. There are three main types of climbing competition: lead, speed, and bouldering. In lead climbing, the competitors start at the bottom of a route and must climb within a certain time frame, making sure to clip the rope into pre-placed quickdraws along the route. Speed climbing can either be an individual or team event, with the person or team that can climb a standardized route the fastest is the winner. Bouldering competitions consist of climbing short problems without rope, with the emphasis on number of problems completed. 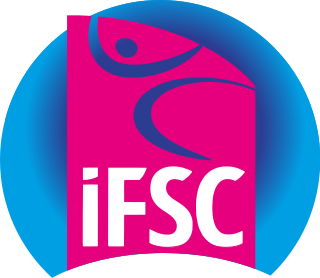 The International Federation of Sport Climbing (IFSC) is the international governing body for the sport of competitive climbing, which consists of the disciplines lead climbing, speed climbing, and bouldering. It was founded in Frankfurt on 27 January 2007 by 48 member federations, and is a continuation of the International Council for Competition Climbing, which had been in existence from 1997 to 2007 and was a part of the Union Internationale des Associations d'Alpinisme (UIAA). 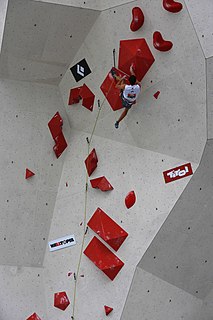 The first event was organized in Frankfurt in 1991.

Frankfurt is a metropolis and the largest city of the German federal state of Hesse, and its 746,878 (2017) inhabitants make it the fifth-largest city in Germany, after Berlin, Hamburg, Munich, and Cologne. On the River Main, it forms a continuous conurbation with the neighbouring city of Offenbach am Main, and its urban area has a population of 2.3 million. The city is at the centre of the larger Rhine-Main Metropolitan Region, which has a population of 5.5 million and is Germany's second-largest metropolitan region after the Rhine-Ruhr Region. Since the enlargement of the European Union in 2013, the geographic centre of the EU is about 40 km (25 mi) to the east of Frankfurt's central business district. Like France and Franconia, the city is named after the Franks. Frankfurt is the largest city in the Rhine Franconian dialect area.

In 1991, the Union Internationale des Associations d'Alpinisme (UIAA) organized the first climbing championships. The International Council for Competition Climbing (ICC) was created in 1997 as an internal body of the UIAA to take charge of competitions. [5]

In 2007, the independent IFSC was created as a continuation of the ICC to govern competition climbing.

The first championships had two events: lead and speed. Bouldering was added in 2001.

In 2012, 2014 and 2016, a combined ranking (sometimes also called overall ranking) was computed for climbers participating in all of the three events. [1] [2] [3] In 2018, an specific combined event was included which the six climbers with highest overall ranking [6] [7] were invited to enter. The combined event requires athletes to compete in all three disciplines, and they receive a single combined score based on all three results. Scores achieved in single-discipline events are not relevant to the combined score, and there are no awards for any one part of the combined event. The 2018 combined event tested the new Olympic Games format, which will be used at the first appearance of climbing at the Olympics in 2020. In 2019 the Combined competition was held again with the best eight men's and women's athletes receiving invitations to the 2020 Olympics.

The IFSC Paraclimbing World Championships are the biennial world championships for competition climbing for people with disabilities organized by the International Federation of Sport Climbing (IFSC). This event determines the male and female world champions in various categories.

Shauna Coxsey is an English professional rock climber. She is Britain's most successful climber, having won the IFSC Bouldering World Cup in 2016 and 2017. 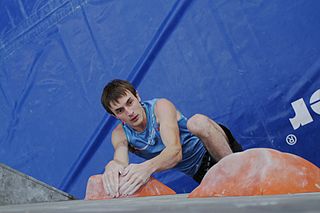 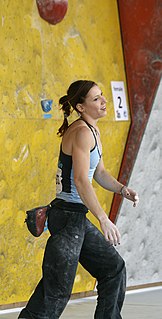 Mina Markovič, born 23 November 1987 in Maribor, Slovenia, is a professional climber. She is mainly active in climbing competitions and participates in the World Cup and World Championships in lead climbing, bouldering and speed climbing, obtaining her best results in lead climbing.

The IFSC Climbing European Championships are the biennial European championships for competition climbing organized by the International Federation of Sport Climbing (IFSC). The first competition was held in Frankfurt in 1992.

The IFSC Climbing World Cup is a series of climbing competitions held annually and organized by the International Federation of Sport Climbing (IFSC). The athletes compete in three disciplines: lead, bouldering and speed. The number of competitions and venues vary from year to year. The first World Cup was held in 1989, and included only lead climbing events. Speed climbing was introduced in 1998 and bouldering in 1999. For 18 seasons, from 1989 to 2006, World Cups were held under the auspices of UIAA and called UIAA Climbing World Cups. Since 2007, they are held under the auspices of IFSC. 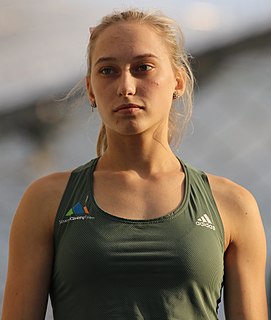 Janja Garnbret is a Slovenian rock climber and sport climber who has won multiple lead climbing and bouldering events. 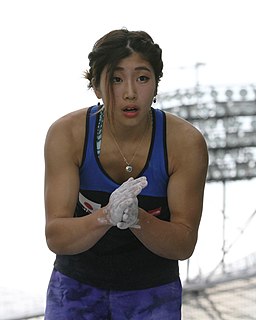 The 2018 IFSC Climbing World Championships, the 15th edition, were held in Innsbruck, Austria from 6 to 16 September 2018. The championships consisted of lead, speed, bouldering, paraclimbing, and combined events.

The 2014 IFSC Climbing World Championships, the 13th edition, were held in Munich, Germany from 21 to 23 August 2014 for bouldering and in Gijón, Spain from 8 to 14 September 2014 for lead, speed, and paraclimbing. 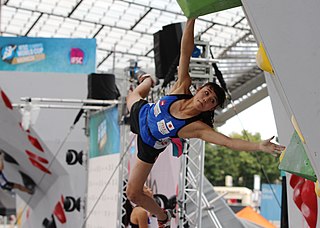 Futaba Ito is a Japanese professional rock climber, sport climber and boulderer. She participates in both bouldering and lead climbing competitions. She won the IFSC Climbing Asian Youth Championships in lead and bouldering events in 2016, as well as Bouldering Japan Cup in 2017. She participated in combined and speed events in the 2018 Asian Games. 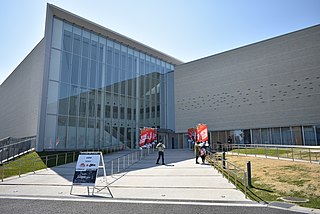 The 2019 IFSC Climbing World Championships, the 16th edition, were held in Hachioji, Japan from 11 to 21 August 2019. The championships consisted of lead, speed, bouldering, and combined events. The paraclimbing event was held separately this year from 16 to 17 July in Briançon, France. The combined event also served as an Olympic qualifying event for the 2020 Summer Olympics. 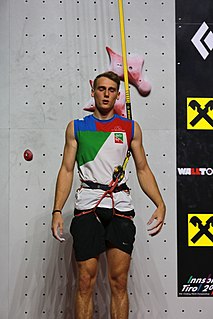 Ludovico Fossali, born May 21, 1997, is an Italian speed climber. He won the speed climbing gold medal at the 2019 IFSC Climbing World Championships in Hachioji, Japan. He placed 9th in the Combined event, securing a qualification for the Tokyo 2020 Olympics.