The ICC World Test Championship is a league competition for Test cricket run by the International Cricket Council (ICC), which started on 1 August 2019. [1] [2] It is intended to be the premier championship for Test cricket. It is in line with the ICC's goal of having one pinnacle tournament for each of the three formats of international cricket. [3]

The original plans to hold the competition in 2013, replacing the 2013 ICC Champions Trophy, were abandoned. It was rescheduled for June 2017, with a second Test championship to take place in India in Feb-March 2021. [4] [5] The top four ranked teams on 31 December 2016 – the cut-off date set by the ICC – would play the three-match Test championship. There would have been two semi-finals and the winners play the final. [6] However, in January 2014 the ICC World Test Championship was cancelled and the 2017 ICC Champions Trophy was reinstated. [7]

This championship was first proposed in 2009, when the ICC met the MCC to discuss a proposed Test match championship. Former New Zealand captain Martin Crowe was one of the main brains behind this proposal. [10]

In July 2010 ICC chief executive Haroon Lorgat suggested a quadrennial tournament with the four best-ranked nations meeting in the semi-finals and a final, in a bid to boost flagging interest in the longest form of the sport. The first tournament was meant to replace the 2013 ICC Champions Trophy in England and Wales. [11] [12]

The idea of a Test championship was considered by the ICC Chief Executives' Committee at a meeting at their headquarters in Dubai in mid-September 2010. ICC spokesperson Colin Gibson said that much more would be revealed after the meeting, and that if the championship was held in England, then the favoured final venue would be Lord's. [13] As expected, the ICC approved the plan and said that the first tournament would be held in England and Wales in 2013. The format of the tournament was also announced. It would comprise an inaugural league stage, played over a period of four years, with all ten current Test cricket nations (Australia, India, England, South Africa, Pakistan, Sri Lanka, New Zealand, West Indies, Zimbabwe, and Bangladesh) participating. After the league stage the top four teams will take part in the play-offs, with the final determining the Test cricket champions. [14]

There was a debate as to whether the play-off would take place between the bottom two teams or the top four teams, but the latter was unanimously chosen by the board. It was also announced that the tournament would replace the ICC Champions Trophy. [14] No decision had been made concerning how to decide the outcome of drawn matches in the knock-out stages.

However, in 2011, the ICC announced that the Test Championship would not take place until 2017, and that the 2013 tournament would be cancelled because of financial problems within the board, and its commitment to its sponsors and broadcasters. England and Wales, the original hosts of this cancelled tournament were awarded the 2013 ICC Champions Trophy instead, the tournament that the Test Championship was intended to replace. [15] This drew widespread criticism; both Greg Chappell and Graeme Smith criticised the ICC, saying that postponing the Test Championship was wrong and unjustified. [16] [17] The Guardian reported that this postponement was a blow to Lord's, which had been expected to host the final. [18]

At the ICC Chief Executives' meeting in April 2012, it was confirmed that the ICC Champions Trophy would be last held in 2013 with the inaugural Test Championship play-offs being scheduled for June 2017. [19] The ICC said that there would be only one trophy for each format of the game, which meant that the Champions Trophy would no longer take place since the Cricket World Cup is the premier event for 50-over cricket.

The final would possibly have followed the historical timeless test format. [20] Further improvements in the structure of the championship have also been discussed.

However, in January 2014 the 2017 ICC World Test Championship was cancelled and the 2017 ICC Champions Trophy was reinstated. [21]

The first tournament began with the 2019 Ashes series. In March 2020, matches were suspended due to the COVID-19 pandemic, not resuming before July 2020, with several rounds of matches being postponed or ultimately cancelled. New Zealand became the first team to qualify for the final, when it was confirmed that the series between South Africa and Australia would not proceed, [22] followed by India. The inaugural World Test Championship Final was played between India and New Zealand from 18–23 June 2021 at Rose Bowl, Southampton, England. [23] Despite the opening and fourth day of the final being washed out by rain, [24] New Zealand managed to win in the final session of the reserve day and lifted the first World Test Championship trophy. [25]

An overview of all the Test playing nations' performances:

The ICC Men's Champions Trophy is a One-Day International (ODI) cricket tournament organised by the International Cricket Council (ICC), second in importance only to the Cricket World Cup. It is also known as the "Mini World Cup".

The 2009 ICC Champions Trophy was a One Day International cricket tournament held in South Africa between 22 September and 5 October, at Wanderers Stadium and Centurion Park, both in the Gauteng province. Originally, the tournament was scheduled to be hosted by Pakistan in 2008, but due to security concerns it shifted to South Africa. It was the sixth ICC Champions Trophy, and was previously known as the ICC Knock-out. Two teams from two groups of four qualified for the semi-finals, and the final was staged in Centurion on 5 October. Australia successfully defended the title by beating New Zealand by six wickets in the final.

The 2022 ICC Women's Cricket World Cup will be the twelfth edition of the Women's Cricket World Cup and is scheduled to be held in New Zealand in March and April 2022. It was originally scheduled for 6 February to 7 March 2021 but was postponed by one year due to the COVID-19 pandemic. On 15 December 2020, the ICC confirmed that the tournament will take place from 4 March to 3 April 2022. 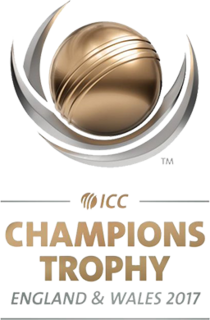 The 2017 ICC Champions Trophy was the eighth ICC Champions Trophy, a cricket tournament for the eight top-ranked One Day International (ODI) teams in the world. It was held in England and Wales from 1 to 18 June 2017. Pakistan won the competition for the first time with a 180-run victory over India in the final at The Oval. The margin of victory was the largest by any team in the final of an ICC ODI tournament in terms of runs.

The 2021 international cricket season is taking place from May 2021 to September 2021. Currently, 13 Tests, 56 One Day Internationals (ODIs), 45 Twenty20 Internationals (T20Is) are scheduled to be held in this season. The final of the 2019–2021 ICC World Test Championship took place in June at the Rose Bowl in Southampton, England, with New Zealand beating India by eight wickets. The 2021–2023 ICC World Test Championship started in August 2021, with India's tour of England.

The Australia cricket team were scheduled to tour South Africa in March 2021 to play three Test matches. The matches would have formed part of the inaugural 2019–2021 ICC World Test Championship. However, in February 2021, the tour was postponed due to the COVID-19 pandemic.