In the earlier days of the tournament, Hungary's men's team was a dominant force, winning the championships 12 times. This was followed by a short period of dominance by Japan in the 1950s. From the 1960s onwards, China emerged as the new dominant power in this tournament and, with the exception of 1989–2000, when Sweden won four times, China continues to dominate the sport. China's men's team holds a record 20 world team championship titles.

In the 1950s, Japan's women team was a force to be reckoned with winning a total of 8 titles. The Chinese women started their strong grip on the world team championships from the 1970s onwards. They have only lost twice since 1975. China holds 21 women's team titles.

There are 7 different trophies presented to the winners of the various events, held by winning associations, and returned for the next world championships. [1]

In addition, the Egypt Cup is presented to the next host of world championships. The Cup was donated by King Farouk of Egypt in 1939, when the championships were held in Cairo, Egypt.

Since 1982, the Senior Veterans Table Tennis Championships are held every two years by the Swaythling Club International have been held. All players who are at least 40 years old in the year of the event are eligible to play. The ladies and gentlemen play each in eight age groups, the seniors 40, 50, 55, 60, 65, 70, 75, 80 and 85 in singles and doubles for the titles. A previous qualification is not required.

The previous venues of the Senior World Championships:

Results of Individual and Team Events 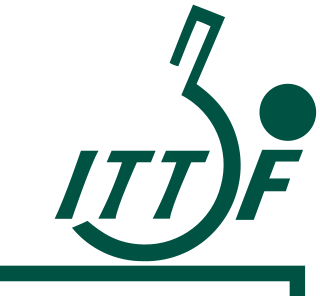 The International Table Tennis Federation (ITTF) is the governing body for all national table tennis associations. The role of the ITTF includes overseeing rules and regulations and seeking technological improvement for the sport of table tennis. The ITTF is responsible for the organization of numerous international competitions, including the World Table Tennis Championships that has continued since 1926. 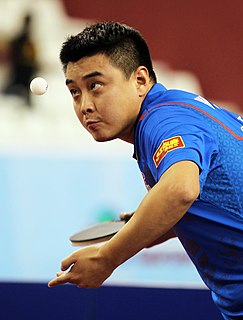 Wang Hao is a retired Chinese table tennis player. He became the World Champion in Men's Singles in Yokohama, Japan in May 2009, defeating three-time World Champion Wang Liqin 4–0. His other notable accomplishments include being a three-time World Cup Champion in 2007, 2008 and 2010, a singles silver medalist at the 2004 Summer Olympics, 2008 Summer Olympics and the 2012 Summer Olympics. In January 2010, he was replaced by Ma Long as the #1 rank on the official ITTF world rankings. He was previously ranked #1 on the official ITTF world rankings for 27 consecutive months, from October 2007 to December 2009. In April 2011, he was again the top ranked male player in the world. He is known to execute the Reverse Penhold Backhand (RPB) with exceptional skill.

Wang Nan is a female Chinese table tennis player from Liaoning. Wang remained as world #1 on the ITTF ranking system from January, 1999 to November, 2002. She is left-handed, and began playing table tennis when she was seven years old. Her particular skills are changing the placement of the ball during rallies and her loop drive, as well as her notable speed. Wang has been the leader of the women's table-tennis team of China after Deng Yaping's retirement. 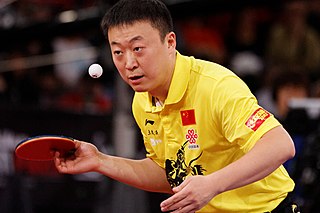 The European Table Tennis Union (ETTU) is the governing body of the sport of table tennis in Europe, and is the only authority recognised for this purpose by the International Table Tennis Federation. The ETTU deals with all matters relating to table tennis at a European level, including the development and promotion of the sport in the territories controlled by its 58 member associations, and the organisation of continental table tennis competitions, including the European Championships.

Ariel Yenhua Hsing is an American table tennis player who competed in the 2012 Summer Olympics.

Xu Xin is a Chinese professional table tennis player who is ranked world No. 2 for men's singles by the International Table Tennis Federation (ITTF), as of April 2020. He first reached his career-high singles ranking of world No. 1 in January 2013.

This is a list of achievements in major international table tennis events according to gold, silver and bronze medal results obtained by athletes representing different nations. The objective is not to create a combined medal table; the focus is on listing the best positions achieved by athletes in major global events, ranking the countries according to the most number of podiums accomplished by athletes of these nations. In order to be considered for the making of the list, competitions must be ranked among the highest possible rank (R1) by the International Table Tennis Federation (ITTF); these competitions are: 1) Summer Olympic Games, 2) Youth Olympic Games, 3) World Table Tennis Championships, 4) World Junior Table Tennis Championships, and 5) Table Tennis World Cup. Masters, as well as Para meets, such as the Para World Championships and the Paralympic Games, were not taken into consideration, as per ITTF guidelines.