The Overwatch World Cup (OWWC) is an annual international Overwatch esports tournament organized by Blizzard Entertainment, the game's developer. The current format involves a preliminary stage in which any national is allowed to compete in. The top five countries from the preliminary stage move on to the group stages, along with five automatically qualified teams. Three teams from each group advance to a single-elimination playoff bracket at Blizzard's BlizzCon event every November. The first three World Cups were won by South Korea, while the most recent one was won by the United States.

According to lead game director Jeff Kaplan, Overwatch was not developed with any dedication towards esports. Dan Szymborski of ESPN stated that Overwatch was poised as the next big esport for having a sufficiently different look and playstyle from established esports titles like Counter-Strike: Global Offensive and Call of Duty , enough variety in maps and characters, and strong support from Blizzard to maintain the game for a long time. [2] Bryant Francis writing for Gamasutra noted the speed and short match times of Overwatch make the game highly favorable for viewership, further supporting the title as an eSports title. [3] Overwatch's progression into eSports was described by Rolling Stone as a "strategy [that] involved carefully rolling out the game in steps – first a closed beta, then open beta, then full release, then a competitive mode and finally a league." [4]

In June 2016, the esports organizer ESL announced that they would host the first international Overwatch competition in August 2016, called Overwatch Atlantic Showdown. [5] The competition used four open qualifiers beginning in June, followed by regional qualifiers and then a final online qualifier. Eight teams then competed for a six-figure prize in the finals to be held at Gamescom 2016 from August 20–21. [6] Turner Broadcasting's ELeague announced the first Overwatch Open tournament, starting in July 2016, with a total prize pool of $300,000, with plans to broadcast the finals on Turner's cable channel TBS in September 2016. [7] In August 2016, Blizzard announced their own Overwatch international tournament, allowing users to vote for teams to represent their nation or region. [8] [9] Over 3 million votes to decide national teams were cast. [10] The inaugural Overwatch World Cup was watched by 100,000 people at BlizzCon 2016. [11] The South Korean team won the tournament, defeating the Russian team 4–0 in the final round. [12]

In March 2017, Blizzard announced Overwatch World Cup 2017. [10] The selection of national teams for the 2017 World Cup was different from 2016 in that participating nations were required to vote for an Overwatch World Cup National Committee. [10] The National Committees were based upon nominations chosen by Blizzard; according to Blizzard, "analysts, coaches, statisticians, and other authorities" recommended rosters for all stages of the competition. [10] [13] Blizzard announced the 2017 World Cup participants in April. [14] The 2017 World Cup experienced an issue with several players on the Chinese team being denied visas to enter the United States for the final round, causing four players on the team to be replaced by substitutes. [15] [16]

The 2016 format had four qualifying tournaments to thin the field for the final tournament, [17] while the 2017 and 2018 formats used an average skill rating of each country's top players to determine which countries qualified for the tournament. [13] [18] Qualified teams were divided into round-robin style groups – 4 groups in 2016, 8 in 2017, and 4 in 2018. [19] [20] In every year, teams that made it past the group stages moved on a single-elimination playoff bracket.

The Group Stages took place on November 1, 2019. The ten countries competing in the group stages will be split evenly into two round-robin style groups. The top country from each group will move on to the semifinals, while the second- and third-placed countries in each group will move on to the quarterfinals. [21] The knockout stage will take place the following day on November 2. The six teams that move on from the group stages will participate in a single-elimination playoff. The winner of the finals will be awarded a gold medal, while the loser will be awarded silver. The two teams that lost in their respective semifinals match will play each other for the bronze medal. [21]

The World Cup is broadcast through live stream channels via the Twitch platform. [22] Official live stream broadcast channels are provided in English, Chinese, Korean, French, Russian, German, Japanese, and Thai. [22] Other languages are broadcast through community–run channels on the official Overwatch World Cup team page. [22] Prior to the third edition of the event, Disney and Blizzard Entertainment announced a multiyear deal for coverage of Overwatch esports. [1]

All-time table for knockout round

An MVP award for the Final Round of the OWC has been awarded since the inaugural tournament in 2016.

Esports is a form of sport competition using video games. Esports often takes the form of organized, multiplayer video game competitions, particularly between professional players, individually or as teams. Although organized competitions have long been a part of video game culture, these were largely between amateurs until the late 2000s, when participation by professional gamers and spectatorship in these events through live streaming saw a large surge in popularity. By the 2010s, esports was a significant factor in the video game industry, with many game developers actively designing and providing funding for tournaments and other events. 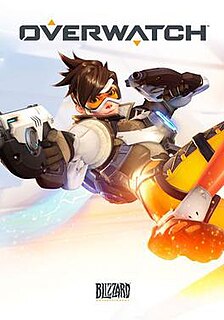 Overwatch is a team-based multiplayer first-person shooter developed and published by Blizzard Entertainment. Described as a "hero shooter", Overwatch assigns players into two teams of six, with each player selecting from a roster of over 30 characters, known as "heroes", each with a unique style of play that is divided into three general roles that fit their purpose. Players on a team work together to secure and defend control points on a map or escort a payload across the map in a limited amount of time. Players gain cosmetic rewards that do not affect gameplay, such as character skins and victory poses, as they play the game. The game was initially launched with only casual play, but a competitive ranked mode, various 'arcade' game modes, and a player-customizable server browser were added after release. Additionally, Blizzard has added new characters, maps, and game modes post-release, all free of charge, with the only additional cost to players being optional loot boxes to earn cosmetic items. It was released for PlayStation 4, Xbox One, and Windows in May 2016, and Nintendo Switch in October 2019.

Team Envy is an American esports franchise based in Dallas, Texas and is owned by Envy Gaming. Founded in 2007 as a professional Call of Duty team, they have since gone to field rosters in Counter-Strike, FIFA, Fortnite, Gears of War, Halo, League of Legends, Magic: the Gathering, Overwatch, Paladins, PUBG, Rocket League, SMITE, StarCraft, Super Smash Bros. and Street Fighter.

Immortals is a professional esports organization based in the United States. It was founded on October 7, 2015 after the acquisition of Team 8's LCS spot.

ELeague, shortened as EL, and stylized as ΞLEAGUE is an esports league and American television show that aired on TBS. It was announced in September 2015 as a partnership between Turner Broadcasting and talent agency WME/IMG. The name "ELeague" was officially unveiled later that year.

The Overwatch League (OWL) is a professional esports league for the video game Overwatch, produced by its developer Blizzard Entertainment. The Overwatch League follows the model of other traditional North American professional sporting leagues by using a set of permanent, city-based teams backed by separate ownership groups. In addition, the league plays in the regular season and playoffs format rather than the use of promotion and relegation used commonly in other esports and non-North American leagues, with players on the roster being assured a minimum annual salary, benefits, and a portion of winnings and revenue-sharing based on how that team performs. The League was announced in 2016 with its inaugural season taking place in 2018, with a total prize pool of US$3.5 million given to teams that year.

Misfits Gaming is a professional esports organisation based in the United Kingdom that currently has players competing in League of Legends and Super Smash Bros.: Ultimate. It originally began as a League of Legends team and was founded on 18 May 2016.

The 2017 Overwatch World Cup was an Overwatch esports tournament, organized by Blizzard Entertainment, the game's developer. It was the second Overwatch World Cup and featured 32 represented nations from around the world, with the final tournament taking place at the Anaheim Convention Center from November 3–4, 2017.

Dallas Fuel is an American professional Overwatch team based in Dallas, Texas. The Fuel compete in the Overwatch League (OWL) as a member of the league's Pacific West Division.

Seoul Dynasty is a South Korean professional Overwatch esports team based in Seoul, South Korea. The Dynasty compete in the Overwatch League (OWL) as a member of the league's Pacific East Division.

London Spitfire is a professional Overwatch team based in London, United Kingdom. The Spitfire compete in the Overwatch League (OWL) as a member of the league's Atlantic North Division.

Félix Lengyel, better known by his online alias xQc, is a French-Canadian Twitch streamer, internet personality and former professional Overwatch player who played for the Dallas Fuel in the Overwatch League for part of the inaugural season, before being released due to repeated controversy. He later joined Gladiators Legion, an Overwatch Contenders team affiliated with Overwatch League's Los Angeles Gladiators, as a substitute. Lengyel has also played in the Overwatch World Cup for Team Canada in 2017, 2018 and 2019. He now streams full-time on Twitch.

The 2018 Overwatch World Cup was an Overwatch esports tournament, organized by Blizzard Entertainment, the game's developer. It was the third Overwatch World Cup. It featured 24 represented nations from around the world, with the final tournament taking place at the Anaheim Convention Center during BlizzCon from November 2–3, 2018.

The 2019 Overwatch World Cup was the fourth edition of the Overwatch World Cup, an Overwatch esports tournament, organized by the game's developer Blizzard Entertainment and took place at the Anaheim Convention Center during BlizzCon from November 1–2, 2019. After qualifications, ten team competed in the group stages, with six team advancing to the knockout round.

Ryu Je-hong, better known by his online alias ryujehong, is a South Korean professional Overwatch and a former player for the Vancouver Titans of the Overwatch League.

Daniel Francesca, better known by his online alias dafran, is a Danish former Twitch video game streamer and former professional Overwatch player. As an esports competitor, Francesca represented Selfless Gaming before being suspended from competitive play. He returned to competitive play with Atlanta Reign, one of the expansion franchises for the 2019 Overwatch League season. At the end of the Stage 1 of the League's 2019 season, Francesca announced that he would be stepping away from competitive play in favor of being a full-time streamer for the Atlanta Reign. Francesca has also played in the Overwatch World Cup for Team Denmark in 2016.

The Team Envy Overwatch team represents Team Envy, an American esports franchise, in the video game Overwatch. Originally competing under the name Team EnVyUs, the team won multiple regional and international competitions before being transferred to the Dallas Fuel franchise of the Overwatch League (OWL) by their parent organization, Envy Gaming. The franchise reestablished its Overwatch division in 2018 and currently competes in the North America West region of Overwatch Contenders (OWC) as an academy team for the Dallas Fuel.

Kim Hyo-jong (Korean: 김효종), better known by his online alias Haksal, is a professional South Korean Overwatch player who plays for the New York Excelsior of the Overwatch League (OWL.) He previously competed for the Vancouver Titans before mutually parting ways with the organization. Kim began his professional Overwatch career playing for RunAway, where he was named OGN's APEX Season 4 most valuable player and won 2018 Season 2 of Overwatch Contenders Korea. In the Overwatch League, Park signed with the Titans in their first year of existence. With the Titans, he reached the 2019 Grand Finals, where they fell to the San Francisco Shock. Kim received the first-ever OWL "Rookie of the Year" award in the 2019 regular season.