They have been held every two years except for when they were held in consecutive years 2003 and 2004 to facilitate the need for them to be held in alternate years to the main World Athletics Championships (outdoors) in the future.

Cancelled due to COVID-19 and postponed to 2023

The events held have remained more or less the same since they originated, with the main alterations coming in the earlier years.

The 4 x 400 m relay race for both men and women was added to the full schedule in 1991 with the women's triple jump, the latter as an exhibition event, and gaining full status at the following championships.

Racewalking events were dropped after 1993, and a 1600 m medley relay was tried but was discontinued were due to poor interest. This same year, a men's heptathlon and women's pentathlon were successfully introduced as non-championship events, and have remained on the program since.

In 1997 the women's pole vault entered the fray, two years before it made an appearance at the event's outdoor counterpart.

Despite the event's popularity, the 200 m was removed from the program after the 2004 championships, as the event was deemed unfair and too predictable, with the tight bends involved in the race meaning any athletes not drawn in either of the outside lanes had minimal or no chance of winning.

Key to tables:   DisqualifiedX = annulled due to doping violation

ANA was the name, under which Russian athletes competed in the 2018 Championships. Their medals were not included in the official medal table. [23]

In the IAAF placing table the total score is obtained from assigning eight points to the first place and so on to one point for the eight place. Points are shared in situations where a tie occurs. 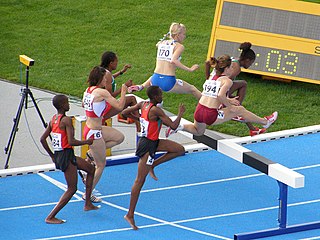 The 2012 IAAF World Indoor Championships in Athletics was the 14th edition of the global-level indoor track and field competition and was held between March 9–11, 2012 at the Ataköy Athletics Arena in Istanbul, Turkey. It was the first of four IAAF World Athletics Series events in 2012, which includes the World Race Walking Cup, the World Junior Championships and the World Half Marathon Championships.

For the athletics competitions at the 2012 Summer Olympics the following qualification systems were in place. The list has been updated to 30 June 2012. Qualification ended on 8 July 2012.

Kevin Mayer is a French athlete. He is the world champion (2017), two-time Olympic silver medalist and world record holder in the Decathlon.

The 2014 Asian Indoor Athletics Championships was the sixth edition of the international indoor athletics event between Asian nations. It took place at the Vocational and Technical College Athletics Hall in Hangzhou, China, between 15 and 16 February. The city was confirmed as the host in September 2013 at the 77th Council Meeting of the Asian Athletics Association. This was the second time the city held the event, successively following on from the 2012 Championships. A total of 28 nations were represented at the tournament comprising 26 track and field events.