The 800 metres, or meters (US spelling), is a common track running event. It is the shortest commonly run middle-distance running event. The 800 metres is run over two laps of an outdoor (400-metre) track and has been an Olympic event since the first modern games in 1896. During the winter track season the event is usually run by completing four laps of an indoor 200-metre track.

The event was derived from the imperial measurement of a half mile (880 yards), a traditional English racing distance. 800m is 4.67m less than a half mile.

The event combines aerobic endurance with anaerobic conditioning and sprint speed, so the 800m athlete has to combine training for both.

Runners in this event are occasionally fast enough to also compete in the 400 metres but more commonly have enough endurance to 'double up' in the 1500m. Only Alberto Juantorena and Jarmila Kratochvílová have won major international titles at 400m and 800m.

The 800m is also known for its tactical racing. Because it is the shortest middle-distance event that has all the runners converge into one lane (after the first bend), positioning on the cut-in and the position of the pack is critical to the outcome of the race. Gaining a front position early in the race is often advantageous as there are occasionally trips when running in a pack. Olympic champions Dave Wottle, Kelly Holmes and others have defied that logic by running a more evenly paced race, lagging behind the pack and accelerating past the slowing early leaders. Often the winner of elite 800m races is not the fastest runner, but the athlete best positioned near the end of the race: an athlete directly behind another runner, has to switch to an outer lane to overtake, so has to run further—and might be blocked by a third runner alongside. [1]

800 metre participants usually run a positive split, where the first lap is faster, but a negative split is occasionally run as a tactic. The current world record (by David Rudisha) was run with a positive split in the 2012 Olympics. Rudisha ran the first lap in 49.28 seconds and the second in 51.63 seconds. Theoretically, an even split is the most efficient running mode[ citation needed ], but it is difficult to pace correctly.

The 1500 metres or 1,500-metre run is the foremost middle distance track event in athletics. The distance has been contested at the Summer Olympics since 1896 and the World Championships in Athletics since 1983. It is equivalent to 1.5 kilometers or approximately 15⁄16 miles. The event is closely associated with its slightly longer cousin, the mile race, from which it derives its nickname "the metric mile". 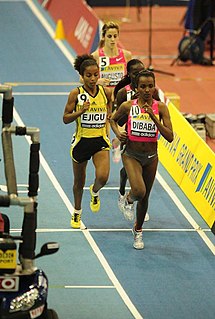 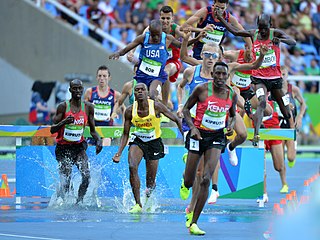 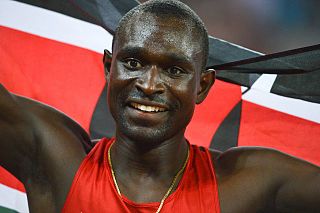 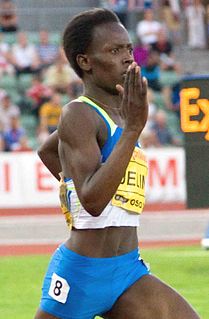 Pamela Jelimo is a Kenyan middle-distance runner, specialising in the 800 metres. She won the gold medal in 800 metres at the 2008 Olympics in Beijing at the age of 18. She is the first Kenyan woman to win an Olympic gold medal and also the first Kenyan to win the Golden League Jackpot. She holds both the 800 m world junior record and the senior African record over the same distance. Jelimo is also one of the youngest women to win an Olympic gold medal for Kenya. 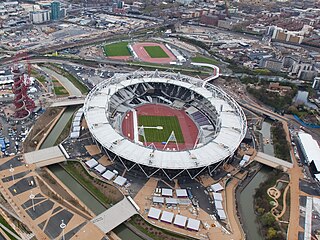 The London Diamond League, formerly known as the London Grand Prix and subsequently as the Anniversary Games, is an annual athletics event held in London, England. Previously one of the five IAAF Super Grand Prix events, it is now part of the Diamond League. As the London Grand Prix, until 2012 all editions were held at the National Sports Centre in Crystal Palace. The 2013 edition was renamed the Anniversary Games as it took place at the Stadium in Queen Elizabeth Olympic Park, exactly one year after the Olympic Games were held in the same venue and have been followed by an IPC London Grand Prix, making it a three-day event. In 2014 the meet was held in Glasgow, Scotland, as preparation for the Commonwealth Games held there later that month.

The Women's 800 metres competition at the 2012 Summer Olympics in London, United Kingdom. The event was held at the Olympic Stadium on 8–11 August. The race was won by Mariya Savinova, but she has since been stripped of the gold medal for doping. 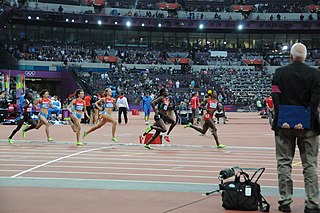