Athletics at the 1904 Summer Olympics

Last updated May 15, 2022
Athletics at the Olympics

At the 1904 Summer Olympics, twenty-five athletics events were contested. A total of 74 medals (25 gold, 25 silver and 24 bronze) were awarded.

A track was built specifically for the Games on the campus of Washington University in St. Louis. The cinder track was 1/3 mile in length with one long straightaway. [1]

233 athletes from 10 nations competed. This figure includes the athletic triathlon event, which some sources exclude.

The marathon was the most bizarre event of the Games. It was run in brutally hot weather, over dusty roads, with horses and automobiles clearing the way and creating dust clouds. [4]

The first to arrive at the finish line was Frederick Lorz, who actually rode the rest of the way in a car to retrieve his clothes, after dropping out after nine miles, but after the car broke down at the 19th mile, he re-entered the race and jogged back to the finish line.

As officials and fans believed he had won the race, Lorz played along with his practical joke until he was found out shortly before the medal ceremony. He admitted the ruse, and was banned for life by the AAU; however, after Lorz apologized for this stunt and it was found he had no intention to defraud, he was reinstated, and won the 1905 Boston Marathon. [5]

Thomas Hicks was the first to the finish legally, after having received from his trainers several doses of strychnine sulfate (a common rat poison, which stimulates the nervous system in small doses) mixed with egg whites and brandy. [6] While he was supported by his trainers when he crossed the finish line, he is still considered the winner: Hicks had to be carried off the track on a stretcher, and possibly would have died in the stadium had he not been treated by several doctors. He lost eight pounds during the course of the marathon.

A Cuban postman named Felix Carvajal joined the marathon, arriving at the last minute. He had to run in street clothes that a fellow runner cut around the legs to make them look like shorts. He stopped off in an orchard en route to have a snack on some apples which turned out to be rotten, and caused him to have to lie down and take a nap. Despite falling ill from the apples, he finished in fourth place. [7] [8]

Thomas John Hicks was an American track and field athlete. He won the marathon at the Olympic Games in 1904.

Stamata Revithi was a Greek woman who ran the 40-kilometre marathon during the 1896 Summer Olympics. The Games excluded women from competition, but Revithi insisted that she be allowed to run. Revithi ran one day after the men had completed the official race, and although she finished the marathon in approximately 5 hours and 30 minutes and found witnesses to sign their names and verify the running time, she was not allowed to enter the Panathinaiko Stadium at the end of the race. She intended to present her documentation to the Hellenic Olympic Committee in the hopes that they would recognize her achievement, but it is not known whether she did so. No known record survives of Revithi's life after her run. 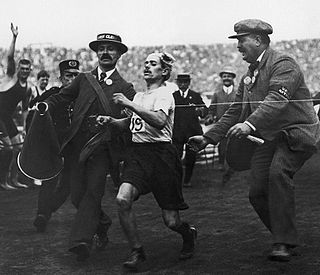 The men's marathon race of the 1908 Summer Olympics took place in London on 24 July 1908. Johnny Hayes won after Dorando Pietri was disqualified for having received assistance before the finish line. For the first time in an Olympic marathon, the distance was 26 mi 385 yd (42.195 km), which would become the standard distance in 1921. 75 competitors entered the race, of whom 55 from 16 nations started, with 27 from 11 nations finishing. NOCs could enter up to 12 athletes. The United States and South Africa each won their first Olympic marathon medals.

The men's marathon event was a special race invented as part of the Athletics at the 1896 Summer Olympics programme. Seventeen athletes from 5 nations competed. It was the capstone of the athletics programme. The event was won by Spyridon Louis and was the only Greek victory in athletics.

Frederick "Fred" Lorz was an American long distance runner who won the 1905 Boston Marathon. Lorz is also known for his "finish" in the marathon at the 1904 Summer Olympics for not having crossed the "half-way mark" and still winning. 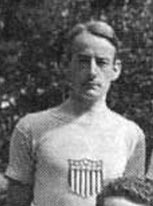 Joseph Forshaw, Jr. was an American athlete who competed mainly in the Marathon. 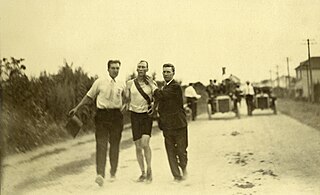 The men's marathon at the 1972 Summer Olympics in Munich, West Germany was held on Sunday September 10, 1972. The race started at 15:00h local time. There were 74 competitors from 39 countries. Twelve of them did not finish. The maximum number of athletes per nation had been set at 3 since the 1930 Olympic Congress. The event was won by Frank Shorter of the United States, the nation's first Olympic marathon victory since 1908 and third overall. Karel Lismont won Belgium's second medal in the marathon with his silver. Mamo Wolde of Ethiopia became only the second man, after his countryman Abebe Bikila, to win two medals in the marathon. Ethiopia's four-Games medal streak was matched only by Finland (1920–1932).

Richard Grant was a Canadian track and field athlete who competed at the 1900 Summer Olympics in Paris, France for the United States. He also competed in the first four Boston Marathons, one of only two athletes to have done so. 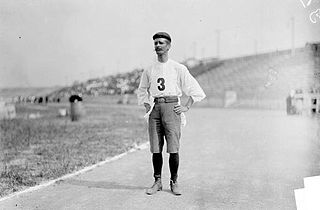 Harvey Wright Cohn was an American track and field athlete and a member of the Irish American Athletic Club. A native of New York City, Cohn competed in the 1904 Summer Olympics, the 1906 Intercalated Games in Athens and 1908 Summer Olympics in London.

Jack Strangl Bacheler is an American former long-distance runner and two-time U.S. Olympian. Born in Washington, District of Columbia, Bacheler was a founding member of the Florida Track Club at Gainesville, Florida in the late 1960s, and personally designed the club's distinctive "orange" logo. Standing 6 feet 7 inches, yet weighing only 165 pounds, he towered over most of his competitors. Now living in Clayton, North Carolina, he is married to Patricia Bacheler. Bacheler has two children, daughter Teresa (Teri), and son Matthew (Matt).

George Bernard Blake was an Australian sportsman who competed in the 1906 Intercalated Games and 1908 Summer Olympics as a long distance runner. He also played Australian rules football with St Kilda and Carlton in the Victorian Football League (VFL).

John Charles Lordan was an American long-distance runner who won the 1903 Boston Marathon and competed in the marathon at the 1904 Summer Olympics in St. Louis, Missouri.

Joseph John Erxleben was an American long-distance runner who competed in the marathon at the 1912 Summer Olympics in Stockholm.

Ralph Williams was an American long-distance runner. He competed in the marathon at the 1924 Summer Olympics. He made it on the US Olympic Team after finishing 7th in the Boston Marathon on April 19, 1924, with a time of 2:41:58.6. The Boston Marathon was later measured and found to be 152 meters short.

Apolinario "Polin" Belisle Gómez is a former marathon runner. He represented Belize at the 1988 Olympic Games and was scheduled to represent the Honduras at the 1992 Olympic Games, before being removed from the team, although he nevertheless took part in the marathon event.