The 8th World Championships in Athletics, under the auspices of the International Association of Athletics Federations, were held at Commonwealth Stadium in Edmonton, Alberta, Canada between 3 August and 12 August and was the first time the event had visited North America. The music for the Opening and Closing Ceremonies was composed by Canadian composers Jan Randall as well as Cassius Khan and the events were televised live to an estimated[ by whom? ] viewing audience of 4 billion people in over 200 countries.[ citation needed ] The ceremonies also featured a 1000 voice choir, and the Edmonton Symphony Orchestra.

1 Natalya Sadova of Russia originally won the gold medal in discus throw (68.57), but she was later disqualified after she tested positive for caffeine.

Note that the host, Canada, did not win any medals at these championships. This fate Canada shares only with Sweden (1995).

Marion Lois Jones, also known as Marion Jones-Thompson, is a Belizean-American former world champion track and field athlete and a former professional basketball player for Tulsa Shock in the WNBA. She won three gold medals and two bronze medals at the 2000 Summer Olympics in Sydney, Australia, but was later stripped of her medals after admitting to steroid use. Jones did retain her 3 titles as world champion from 1997–1999.

Timothy "Tim" Montgomery is an American former track sprinter who specialized in the 100-meter dash. In 2005, he was stripped of his records—including a now-void men's 100-meter world record of 9.78 seconds set in 2002—after being found guilty of using performance-enhancing drugs as a central figure in the BALCO scandal. Since retiring from athletics, he has been tried and convicted for his part in a New York-based check fraud scheme and for dealing heroin in the Hampton Roads area of Virginia. 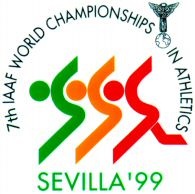 The 7th World Championships in Athletics, under the auspices of the International Association of Athletics Federations, were held at the Estadio Olímpico, Seville, Spain, between the August 20 and August 29. 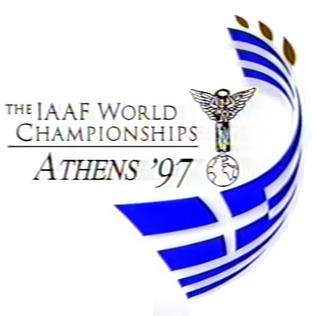 The 6th World Championships in Athletics, under the auspices of the International Association of Athletics Federations, were held at the Olympic Stadium, Athens, Greece between August 1 and August 10, 1997. In this event participated 1882 athletes from 198 participant nations. Athens used the successful organization of the World Championships the next month during the IOC Session in Lausanne during its campaign to host the 2004 Summer Olympics as proof positive of Athens' and Greece's ability and readiness to organize large-scale, international sporting events.

Victor Conte Jr. is a former bassist with Tower of Power and the founder and president of Bay Area Laboratory Co-operative (BALCO), a sports nutrition center in California. He served time in prison in 2005 after pleading guilty to conspiracy to distribute steroids and money laundering. He currently operates Scientific Nutrition for Advanced Conditioning. 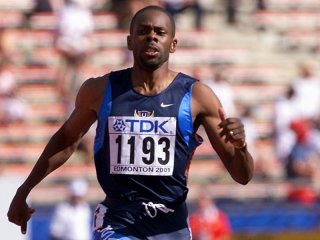 Kelli White is an American former sprinter. She won two gold medals in the World Championships in Paris in 2003. However, on June 18, 2004, she was stripped of her medals, because she tested positive on a drug test. She retired from professional track in 2006.

Trevor Graham is a Jamaican-born American former sprinter and athletics coach. Following the BALCO scandal, the US Olympic Committee barred him indefinitely from all its training sites.

Regina Jacobs is an American former middle-distance runner from Los Angeles. She had an extended career that included two IAAF World Championships in Athletics silver medals and an indoor world championship at the age of 39. Three months later, her career ended after winning what would have been a fifth straight National Championship in the 1500 meters when she was disqualified and banned for doping related to the BALCO scandal.

The 9th IAAF World Cup in Athletics was an international track and field sporting event sponsored by the International Association of Athletics Federations. It was hosted by Madrid, September 21–22, 2002, in the Estadio La Peineta. The IAAF world cup event is currently held every four years.

The Women's long jump competition at the 2000 Summer Olympics in Sydney, Australia was held at the Stadium Australia on 29 September 2000.

The 2003 USA Outdoor Track and Field Championships was organised by USA Track & Field and held from June 19 to 22 at the Cobb Track & Angell Field in Palo Alto, California. The four-day competition served as the national championships in track and field for the United States and also the trials for the 2003 World Championships in Athletics.

The 100 metres at the World Championships in Athletics has been contested by both men and women since the inaugural edition in 1983. It is the second most prestigious 100 m title after the 100 metres at the Olympics. The competition format typically has two or three qualifying rounds leading to a final between eight athletes. Since 2011 a preliminary round has been held, where athletes who have not achieved the qualifying standard time compete to enter the first round proper.