The 1978 Commonwealth Games were held in Edmonton, Alberta, Canada from 3 to 12 August 1978, two years after the 1976 Summer Olympics were held in Montreal, Quebec. They were boycotted by Nigeria, in protest of New Zealand's sporting contacts with apartheid-era South Africa, as well as by Uganda, in protest of alleged Canadian hostility towards the government of Idi Amin. [1] The Bid Election was held at the 1972 Summer Olympics in Munich.

This was the first Commonwealth Games where a computerised system was used to handle ticket sales.

46 teams were represented at the 1978 Games.(Teams competing for the first time are shown in bold).

The 1976 Summer Olympics, officially known as the Games of the XXI Olympiad and commonly known as Montréal 1976, were an international multi-sport event held from July 17 to August 1, 1976 in Montreal, Quebec, Canada. Montreal was awarded the rights to the 1976 Games at the 69th IOC Session in Amsterdam on May 12, 1970. Montreal is the second French speaking city to host the Summer Olympics after Paris, over the bids of Moscow and Los Angeles. It was the first and, so far, only Summer Olympic Games to be held in Canada. Toronto hosted the 1976 Summer Paralympics the same year as the Montreal Olympics, which still remains the only Summer Paralympics to be held in Canada. Calgary and Vancouver later hosted the Winter Olympic Games in 1988 and 2010, respectively. 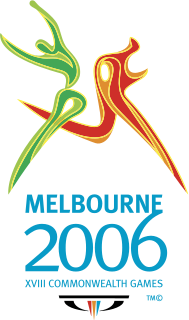 Northlands Coliseum, or simply the Coliseum, is a now-unused indoor arena located in Edmonton, Alberta, situated on the north side of Northlands. It was used for sports events and concerts, and was home to the Edmonton Oilers of the National Hockey League (NHL), and the Edmonton Oil Kings of the Western Hockey League (WHL). The arena opened in 1974, and was later known as Edmonton Coliseum, Skyreach Centre, and Rexall Place, before returning to the Northlands Coliseum name in summer 2016. It used the same architect and plans as Pacific Coliseum.

Commonwealth Stadium, known as The Brick Field at Commonwealth Stadium during Edmonton Elks events, is an open-air, multipurpose stadium located in the McCauley neighbourhood of Edmonton, Alberta, Canada. It has a seating capacity of 55,819, making it the largest open-air stadium in Canada. Primarily used for Canadian football, it can also be used for athletics, soccer, and rugby union, as well as concerts. 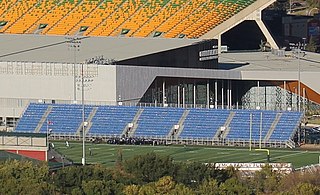 Clarke Stadium is a multipurpose facility located in Edmonton, Alberta, Canada. The stadium was originally used for Canadian football. Over the years different sports have participated at the site. Presently, it is the home of the Edmonton Huskies and the Edmonton Wildcats of the Canadian Junior Football League, and FC Edmonton of the Canadian Premier League.

The Edmonton Grads were a Canadian women's basketball team based in Edmonton, Alberta, Canada active from 1912 – 1940. The team continues to hold the North American record for the women's sports team with the best winning percentage. The Grads won the first women's world title in basketball in 1924.

Susan Christina "Sue" Richardson is a retired British athlete who competed mainly in the long jump. She won the 1984 Olympic bronze medal in the long jump, having won the European Indoor title a few months earlier. Her long jump best of 6.83 metres in 1984, ranks her seventh on the UK all-time list. 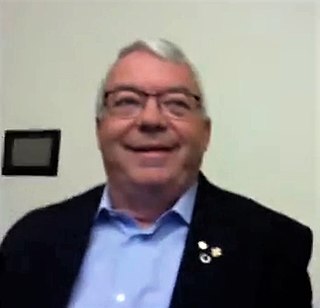 Robert Daniel Steadward, is a Canadian retired sports administrator, professor, sports scientist, and author. Steadward helped organize the first Canadian wheelchair sport national championships in 1968, and later coached Canada in wheelchair basketball at the Summer Paralympics. He became a professor at the University of Alberta in 1971, later served as chairman of the Department of Athletics, and published more than 150 papers about disability sport. He was the founding president of the Alberta Wheelchair Sports Association in 1971, founded the Research and Training Centre for Athletes with Disabilities in 1978, served as president of the Canadian Paralympic Committee from 1984 to 1990, and later became a member of the Canadian Olympic Committee.

Barry Edward Dagger is a British former sport shooter. Dagger competed in the 1976 Summer Olympics and in the 1984 Summer Olympics. He represented England in the 50 metres rifle prone, at the 1978 Commonwealth Games in Edmonton, Alberta, Canada. He represented England and won a gold medal in the 50 metres Rifle 3 Position (Pair) and a silver medal in the 10 metres Air Rifle (Pair), at the 1982 Commonwealth Games in Brisbane, Queensland, Australia.