Rugby sevens at the Commonwealth Games

Medals table for rugby sevens at the Commonwealth Games (first competed for in 1998).

(Fourth) placed teams do not register on a medal tally.

Updated after the 2018 Commonwealth Games

Sport in New Zealand largely reflects the nation's British colonial heritage, with some of the most popular sports being rugby union, rugby league, cricket, football (soccer), basketball and netball, which are primarily played in Commonwealth countries. New Zealand is a small nation but has enjoyed success in many sports, notably rugby union, rugby league, cricket, America's Cup sailing, world championship and Olympics events, and motorsport.

The Fiji National Rugby Sevens Team is the greatest rugby sevens team in the world, competing in the World Rugby Sevens Series, Rugby World Cup Sevens and the Olympics. They won the gold medal at the 2016 Summer Olympics in Brazil, the country's first Olympic medal in any event. They are the only country in the world to have won the three major achievements in Sevens. They have won multiple World Rugby Sevens Series and Rugby World Cup Sevens.

Australia at the 1998 Commonwealth Games was abbreviated AUS. This was their sixteenth of 16 Commonwealth Games having participated in all Games meets up to these Games. The games took place in Kuala Lumpur, between the 11th - 21st of September. Australia placed first, winning a total of 198, with 311 competitors. 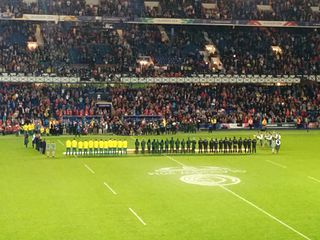 Rugby sevens at the 2014 Commonwealth Games was the fifth time in the competition's history that the event took place. The tournament's preliminaries took place on 26 July, with the classification matches, quarterfinals, semifinals and medal matches the following day. The venue for the competition was Ibrox Stadium. South Africa beat the reigning champions New Zealand in the final on 27 July, beating their opponents 17-12. It was the first time that New Zealand had been beaten in any game since the inception of rugby sevens at the Commonwealth Games in 1998, ending their 30 match win streak and marking the first time any other nation had won the competition.

Sri Lanka competed at the 2018 Commonwealth Games in the Gold Coast, Australia from April 4 to April 15, 2018.

The men's rugby sevens tournament at the 2018 Commonwealth Games was the sixth time in history that the event has taken place since it started in 1998. The venue for the competition was Robina Stadium.