The Samoa national rugby sevens team, referred to as the Samoa Sevens or Manu Samoa 7s, competes in the annual World Rugby Sevens Series. Representing the tiny Polynesian country of Samoa with a population of about 180,000 the Samoa competes against some of the wealthiest countries in the world. [1] The Samoa sevens team is overseen by the Samoa Rugby Football Union, which oversees all of rugby union in Samoa.

Samoa won the 2009–10 World Series [2] by winning four tournaments — the Hong Kong Sevens, [3] the USA Sevens, the Adelaide Sevens, and the Edinburgh Sevens. [4] Samoa has played at all Rugby World Cup Sevens finals tournaments since the championship began in 1993; its best finish was third place in 1997 and again in 2007.

Samoa has won four Oceania Sevens titles since the first competition in 2008. Samoa also won all four gold medals at the Pacific Games Sevens and Pacific Mini Games Sevens between 2007 and 2013, defeating Fiji in the final on each occasion.

In qualifying rounds for the 2016 Olympics, Samoa finished in third place at the 2015 Oceania Sevens Championship, meaning they didn't qualify directly for the Olympics as Oceania's representative. They instead went to the 2016 inter-continental final qualifying tournament, where they lost to Spain 12–19 in the final and failed to qualify for the 2016 Olympics.

At the 1993 Rugby World Cup, Samoa player Gordon Langkilde was arrested at the team hotel and charged with assault and battery after allegedly punching Welsh players after their match, resulting in broken facial bones to Welsh player Tom Williams, who had scored the winning try. [5] Langkilde pled guilty to misdemeanor charges, paid a fine, and was suspended from rugby for one year. [6]

While long a solidly competitive side, Samoa emerged as contenders in the 2006-07 Sevens World Series, finishing third overall while winning two events — the Wellington Sevens and Hong Kong Sevens. The team reached the final four times in a row, playing against series favourite Fiji.

The itinerary for the 2009–10 IRB Sevens World Series;

In July 1997, the Government of Samoa changed the country's name from Western Samoa to Samoa. [9]

Samoa team to the 2015 Pacific Games

Samoa team to the 2014 Commonwealth Games

Two of the highest points and try scorers in series history, Uale Mai and Mikaele Pesamino, played for Samoa. Pesamino was also named the 2010 IRB International Sevens Player of the Year, an honour which Uale Mai, a former team captain and one of the most capped players in the sport, had won in 2006. Captain Lolo Lui and teammate Alafoti Fa'osiliva had also been nominated. [12]

Palauli is a district and village of Samoa, with a population of 8,984. It consists of two sections on the southern side of Savai'i. The capital is Vailoa which is also referred to as Vailoa i Palauli. 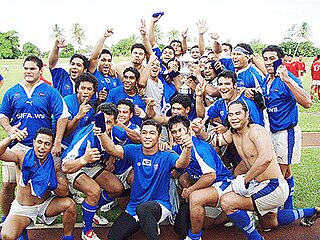 Upolu Samoa is a former Samoa rugby union representative team that played in the IRB Pacific Rugby Cup from 2006 to 2010. The other Samoan team in the Cup was Savaii Samoa. The players for Upolu Samoa were selected from all rugby union competitions in Samoa.

Uale Mai Vala is a retired rugby union player who played for the country's national teams, Manu Samoa and Samoa Sevens. He is a former captain of the Samoa Sevens team which represent Samoa internationally in the IRB Sevens World Series. He was at the time of his retirement sevens rugby's most capped player, and Mai is considered one of the greats in the international sport. Mai has been one of the top points scorers in the IRB World Sevens Series.

Lolo Lui is a Samoan rugby union player and the current veteran of the Samoa Sevens, champions of the 2009–10 IRB Sevens World Series.

Mikaele Pesamino is a rugby union player in the Samoa Sevens team. He was the highest point scorer in the 2009–2010 IRB Sevens World Series helping his country in securing their first World Series crown and was awarded the 2010 IRB World Rugby Sevens Player of the Year.

Vailele is a village situated on the central north coast of Upolu island in Samoa.

The 2010 USA Sevens took place on February 13 and February 14 at Sam Boyd Stadium in Las Vegas, Nevada. It was the fourth Cup trophy in the 2009–10 IRB Sevens World Series. It was the first edition of the USA Sevens to be held in the Las Vegas area; the tournament had been hosted by the Los Angeles suburb of Carson, California from 2004 to 2006, and by San Diego from 2007 to 2009. The USA Sevens is played annually as part of the IRB Sevens World Series for international rugby sevens.

Simaika Mikaele is a rugby union player in the Samoa Sevens team. He has represented Samoa since 2001.

Alafoti Fa'osiliva is a rugby union player for English club Worcester Warriors in the Aviva Premiership and in the national Samoa team.

Belgium Tuatagaloa is a rugby union player who has represented the New Zealand Sevens team, in 2012 and 2013, and Samoa in sevens 2015-2017 and in fifteens from 2019. Born in Auckland, New Zealand, he qualifies for Samoa through heritage. He has played for Canterbury in the ITM Cup and for Valence Romans Rugby in France's Fédérale 1, the third division. He currently plays for London Irish in the English Premiership competition.

Alefaio Vaisuai is a Samoan former rugby sevens player who played as flanker.