In team sport, captain is a title given to a member of the team. The title is frequently honorary, but in some cases the captain may have significant responsibility for strategy and teamwork while the game is in progress on the field. In either case, it is a position that indicates honor and respect from one's teammates – recognition as a leader by one's peers. In association football and cricket, a captain is also known as a skipper. [1]

Various sports have differing roles and responsibilities for team captains. Depending on the sport, team captains may be given the responsibility of interacting with game officials regarding application and interpretation of the rules. In many team sports, the captains represent their respective teams when the match official does the coin toss at the beginning of the game.

The team captain, in some sports, is selected by the team coach, who may consider factors ranging from playing ability to leadership to serving as a good moral example to the team. [2] Coaches may also choose to change team captains from time to time, or to have a rotation of team captains. [2]

Some of the greatest captains in history are the ones with the most subtle of traits that are required for success. From Sam Walker in his book The Captain Class he states that a captain is "the most important factor for a team's success". [3]

Responsibilities of a captain

The responsibilities of a captain vary from sport to sport, but overall help determine the game. In sports like cricket or volleyball, the decision for the two teams to be on either defence or offence is determined with a coin toss and a decision made by the captains. This decision is crucial for the captain because they will decide the beginning of the game and quite possibly how it all plays out.

A captain is also the first one a referee looks to while explaining the results of a play or giving a foul, or flag. Oftentimes a referee will not discuss these matters with any other player than a captain or a coach. This is important because the reaction of the captain may or may not determine how the referee will proceed. A captain must stay calm and cool headed when talking with a referee to ensure the most accurate determinants of the game.

Depending on the sport, a captain will have different responsibilities. For example, a captain of a basketball team must be the one to conduct the offense and be one the most verbal on defense. In the NBA a captain will be the one to talk during interviews and also be the first one to be looked at after a poor performance. In basketball the captain can be substituted out of the game and there does not need to be an active captain on the court at all times, but in soccer a captain must be on the field at all times. Usually the "Captain Band" will be passed to a player with similar seniority to the team when the captain is substituted out of the game. 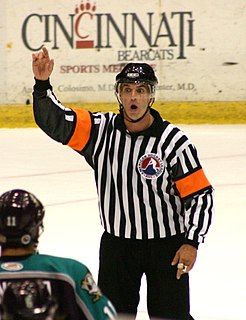 Coin flipping, coin tossing, or heads or tails is the practice of throwing a coin in the air and checking which side is showing when it lands, in order to choose between two alternatives, heads or tails, sometimes used to resolve a dispute between two parties. It is a form of sortition which inherently has two possible outcomes. The party who calls the side that is facing up when the coin lands wins.

The team captain of an association football team, sometimes known as the skipper, is a team member chosen to be the on-pitch leader of the team; they are often one of the older/or more experienced members of the squad, or a player that can heavily influence a game or has good leadership qualities. The team captain is usually identified by the wearing of an armband.

The captain of a cricket team, often referred to as the skipper, is the appointed leader, having several additional roles and responsibilities over and above those of the other players. As in other sports, the captain is usually experienced and has good communication skills, and is likely to be one of the most regular members of the team, as the captain is responsible for the team selection. Before the game the captains toss for innings. During the match the captain decides the team's batting order, who will bowl each over, and where each fielder will be positioned. While the captain has the final say, decisions are often collaborative. A captain's knowledge of the complexities of cricket strategy and tactics, and shrewdness in the field, may contribute significantly to the team's success.

In cricket, the toss is the flipping of a coin to determine which captain will have the right to choose whether their team will bat or field at the start of the match. 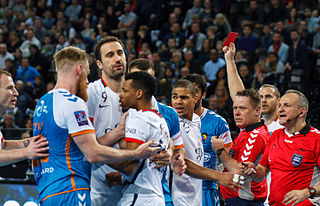 A substitute in the sport of cricket is a replacement player that the umpires allow when a player has been injured or become ill, after the nomination of the players at the start of the game. The rules for substitutes appear in Law 24 of the Laws of Cricket. 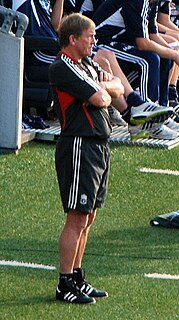 A player-coach is a member of a sports team who simultaneously holds both playing and coaching duties. A player-coach may be a head coach or an assistant coach. They may make changes to the squad and also play on the team.

Penalty cards are used in many sports as a means of warning, reprimanding or penalising a player, coach or team official. Penalty cards are most commonly used by referees or umpires to indicate that a player has committed an offence. The official will hold the card above their head while looking or pointing towards the player that has committed the offence. This action makes the decision clear to all players, as well as spectators and other officials in a manner that is language-neutral. The colour or shape of the card used by the official indicates the type or seriousness of the offence and the level of punishment that is to be applied. Yellow and red cards are the most common, typically indicating, respectively, cautions and dismissals.

Unsportsmanlike conduct is a foul or offense in many sports that violates the sport's generally accepted rules of sportsmanship and participant conduct. Examples include verbal abuse or taunting of an opponent or a game official, an excessive celebration following a significant play, or feigning injury. The official rules of many sports include a general provision whereby participants or an entire team may be penalized or otherwise sanctioned for unsportsmanlike conduct.

A captain of an Australian rules football team, sometimes known as a skipper, is a player who, during the course of a match and off the field, has several additional roles and responsibilities over and above those of a regular player.

Rugby union match officials are responsible for enforcing the rugby union laws of the game during a match and imposing sanctions on individuals who do not follow the rules. "Every match is under the control of match officials who consist of the referee and two touch judges or assistant referees." Further officials can be authorised depending on the level and form of the game.

Touch match officials are responsible for fairly enforcing the Playing Rules of Touch during a match and imposing penalties for deliberate breaches of these rules. The most senior match official is the referee, they may be assisted by a range of other officials depending on the level and rules of the competition.