Last updated February 16, 2020
Graeme Smith (left) holds the record for most Test matches as captain, as well as most Test wins. [1] Steve Waugh (right) is the most successful Test captain, with a winning ratio of 72%. [2]
Some countries opt for a split captaincy, with different captains for different formats to manage workload. Eoin Morgan (left) captains England in ODIs and T20Is, while Joe Root (right) leads the team in Tests.

The captain of a cricket team, often referred to as the skipper, [3] is the appointed leader, having several additional roles and responsibilities over and above those of the other players. As in other sports, the captain is usually experienced and has good communication skills, and is likely to be one of the most regular members of the team, as the captain often has a say in team selection. Before the game the captains toss for innings. During the match the captain decides the team's batting order, who will bowl each over, and where each fielder will be positioned. While the captain has the final say, decisions are often collaborative. A captain's knowledge of the complexities of cricket strategy and tactics, and shrewdness in the field, may contribute significantly to the team's success.

Due to the smaller coaching/management role played out by support staff, as well as the need for greater on-field decision-making, the captain of a cricket team typically shoulders more responsibility for results than team captains in other sports. [4]

Starting from team selection and then toss Before the start of a match the home captain tosses a coin and the away captain calls heads or tails. The captain who wins the toss is given the choice of whether to bat or bowl first. [4] The decision usually depends on the condition of the pitch and whether it is likely to deteriorate, the weather conditions and the weather forecast.

The decision also depends on the relative strengths of the team's batting and bowling. For instance in Test cricket, a side with only fast bowlers may choose to bowl first to try to take advantage of any early moisture in the pitch, knowing that it will be harder to take wickets later in the match. Similarly a side with a weak opening batting pair may choose to bowl first in order to protect their batsmen. [5]

The captain decides where the fielders will stand, in consultation with the bowler and sometimes other senior players. The fielding positions will usually be dictated by the type of bowler, the batsman's batting style, and the captain's assessment of the state of the match (and hence whether to set an attacking or a defensive field). [4]

In limited overs cricket the captain additionally has to make certain that bowlers bowl no more than their allotted maximum number of overs, and that experienced bowlers are available at the end of the batting side's innings, when the batsmen are usually looking to take risks to attack and score quickly. [4]

In the longer forms of cricket, when a new ball becomes available the captain decides whether to use it. [4]

When the team bats, the captain decides the batting order. In professional cricket the captain usually changes the established batting order only for exceptional reasons, because batsmen tend to specialise in batting at certain positions. However, in certain circumstances it may be in the team's interest to change the batting order. If quick runs are needed, a naturally attacking batsman may be promoted up the order. A player who is 'in form' may be promoted to a higher batting position, at the expense of a player who is 'out of form'. [4]

The captain may declare the team's innings closed at any time, but usually only does so as an attacking ploy, for instance if the captain thinks the team has enough runs to win the match, or if a sudden change in conditions has made it advantageous to bowl rather than bat. [4]

In a two-innings match, if the situation arises the captain decides whether to impose the follow-on. [4]

The captain is also consulted on whether an injured batsman from the opposing team may use a runner when batting. Permission is usually given if the batsman has become injured during the course of the match, but if the batsman was carrying the injury at the start of the match then the captain may refuse. (As from 2012 runners are not allowed in test cricket and injured batsmen are required to continue batting with the injury or retire hurt.) [6]

As well as decisions taken either immediately before or during a match, captains also often have some responsibility for the good running of the cricket club. For instance, they may decide when the team is to practise, and for how long. In professional cricket the captain often has some say in who will form the squad from which teams are selected, and may also decide how young up-and-coming players are to be encouraged and improved, and how members of the squad who are not regularly selected for first-team matches are to gain match practice. [4]

Prior to July 2015, the captain was responsible for deciding when to take batting and bowling powerplays in limited overs matches. [7]

The captain may be assisted by a vice-captain or in some instances joint vice-captains. This is particularly useful if the captain is forced to leave the field of play during fielding. Some teams also allocate the vice-captain a more or less formal role in assisting with team selection, discipline, field-setting and so on. Sometimes the role of vice-captain is seen as preparation for the player(s) becoming the captain of the side in future. [9]

In the game of cricket, the cricket pitch consists of the central strip of the cricket field between the wickets. It is 22 yd (20.12 m) long and 10 ft (3.05 m) wide. The surface is flat and normally covered with extremely short grass though this grass is soon removed by wear at the ends of the pitch. 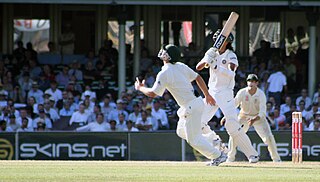 In the sport of cricket, a nightwatchman is a lower-order batsman who comes in to bat higher up the order than usual near the end of the day's play. The nightwatchman's job is to maintain most of the strike until the close of play and so protect other, more capable batsmen from being out cheaply in what may be a period of tiredness or in poor light at the end of the day, and then again the following morning when the batsmen have not yet ‘got their eye in', or when the early-morning conditions may favour the bowlers. The theory is that losing two top-order batsmen in quick succession would be worse than losing one top-order batsman and a tailender.

The Australian cricket team toured India from February to April 2001 for a three-Test series and a five-match ODI series. The series is considered one of India's finest, as they secured victory against Australia in the Test series, in the process breaking Australia's 16-match win streak in Tests, and being the third side to win a Test match after being asked to follow-on during the match in Kolkata. The Kolkata match has been called by some as one of the greatest matches in the sport's history.

The Singer World Series was a quadrangular ODI cricket tournament held in Sri Lanka from 26 August to 7 September 1996. It featured the national cricket teams of Zimbabwe, Australia, India and the hosts, Sri Lanka. The competition was won by Sri Lanka, which defeated Australia in the final.

Mohammad Babar Azam is a Pakistani cricketer who is the captain of Pakistan national cricket team in T20 International and vice-captain in One Day Internationals. He is currently ranked no.1 in T20Is, 3rd in ODIs and 5th in Test batsmen ranking.

The Sri Lankan national cricket team toured New Zealand from 26 December 2014 to 29 January 2015 for a tour consisting of two Test matches and seven One Day Internationals. New Zealand won the Test series 2–0 and the ODI series 4–2.

The Australian cricket team toured Sri Lanka from 18 July to 9 September 2016 to play three Test matches, five One Day Internationals (ODIs), two Twenty20 Internationals (T20Is) matches and a first-class practice match. The Test series was played for Warne–Muralitharan Trophy, with Sri Lanka winning 3–0, their first ever series whitewash against Australia. As a result, Australia slipped from first to third in the ICC Test Championship; Sri Lanka, who had started the series ranked seventh, moved up to sixth.

The West Indian cricket team toured the United Arab Emirates from September to November 2016 to play three Twenty20 International (T20Is), three One Day Internationals (ODIs) and three Test matches against Pakistan. The West Indies Cricket Board (WICB) agreed in principle for one of the Test matches to be played as a day/night match.

The Sri Lanka cricket team toured the United Arab Emirates in September and October 2017 to play two Tests, five One Day Internationals (ODIs) and three Twenty20 International (T20I) matches against the Pakistan cricket team. It included the first Tests that Sarfaraz Ahmed of Pakistan captained following the retirement of Misbah-ul-Haq. The tour also featured a T20I match in Pakistan, the first time that Sri Lanka had visited the country since 2009.

The England cricket team toured New Zealand between February and April 2018 to play two Test and five One Day International (ODI) matches. Fixtures in round 7 of New Zealand's 2016–17 Plunket Shield season were played as day/night matches, in preparation for a day/night Test match, which took place at Eden Park. In August 2017, New Zealand Cricket confirmed that the Test at Eden Park would be played as a day/night game. In September 2017, the second ODI fixture was moved from McLean Park, Napier to the Bay Oval in Mount Maunganui, after issues in re-turfing the ground.

This article contains information, results and statistics regarding the Australian national cricket team in the 2016 and 2016–17 cricket seasons. Statisticians class the 2016–17 season as matches played between May 2016 and April 2017.

The South Africa cricket team toured Sri Lanka in July and August 2018 to play two Tests, five One Day Internationals (ODIs) and a Twenty20 International (T20I) match. Originally, the tour was for three Test matches, but the third match was dropped and replaced by the ODI and T20I fixtures. The extra ODI fixtures were used as preparation for the 2019 Cricket World Cup.

The Sri Lanka cricket team toured New Zealand from December 2018 to January 2019 to play two Tests, three One Day Internationals (ODIs) and one Twenty20 International (T20I) match. They also played a three-day warm-up match ahead of the Test series.

The England cricket team toured the West Indies between January and March 2019 to play three Tests, five One Day Internationals (ODIs) and three Twenty20 International (T20I) matches. The series included England's first Test match in Saint Lucia, when they played at the Darren Sammy National Cricket Stadium. It was also England's first tour to the West Indies to play all three formats of international cricket since they visited in 2009. The ODI fixtures were part of both teams' preparation for the 2019 Cricket World Cup.

The Nepal cricket team toured the United Arab Emirates in January and February 2019 to play three One Day Internationals (ODIs) and three Twenty20 International (T20I) matches, with all the fixtures taking place at the ICC Academy Ground in Dubai.