The 10,000 metres is the longest standard track event, approximately equivalent to 6 miles 376 yards or 32,808 feet 5 inches. Most of those running such races also compete in road races and cross country events.

Added to the Olympic programme in 1912, athletes from Finland, nicknamed the "Flying Finns", dominated the event until the late 1940s. In the 1960s, African runners began to come to the fore. [1] In 1988, the women's competition debuted in the Olympic Games.

The 10,000 metres demands exceptional levels of aerobic endurance, and elite athletes typically train in excess of 160 km (100 miles) a week. [3] 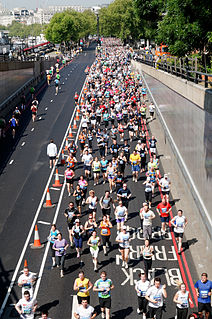 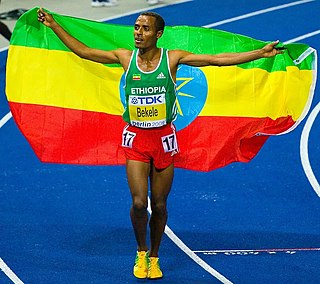 Konstanze "Koko" Klosterhalfen is a German athlete who competes in middle-distance running and the 5000 metres. She is the 2019 IAAF World Championship bronze medalist in the 5000m event. In February 2020, she set a European record in the indoor 5000m with 14:30.79, the fourth fastest time ever. 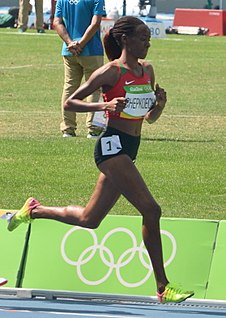 Jacob Kiplimo is a Ugandan long-distance runner who competes in track running events. He is the 2020 Half Marathon World Champion. He represented his country at the 2016 Summer Olympics.

Letesenbet Gidey is an Ethiopian professional long-distance runner. She is the 2015 and 2017 U20 Cross Country World Champion, the fourth woman to win back-to-back titles. At the 2019 World Championships in Doha, Letesenbet won the silver medal in the 10,000m. On 7 October 2020, at the NN Valencia World Record Day meet, she set a new 5000 meters world record in 14:06.62. 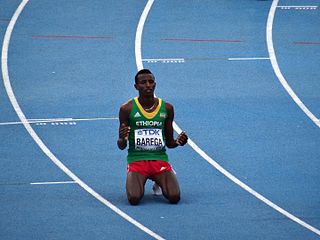 The women's 10,000 metres at the World Athletics Championships was held at the Khalifa International Stadium in Doha, Qatar, on 28 September 2019.