The hammer throw is one of the four throwing events in regular track and field competitions, along with the discus throw, shot put and javelin.

The "hammer" used in this sport is not like any of the tools also called by that name. It consists of a metal ball attached by a steel wire to a grip. The size of the ball varies between men's and women's competitions.

With roots dating back to the 15th century, the contemporary version of the hammer throw is one of the oldest of Olympic Games competitions, first included at the 1900 games in Paris, France (the second Olympiad of the modern era). Its history since the late 1960s and legacy prior to inclusion in the Olympics has been dominated by Europe and Eastern European influence, which has affected interest in the event in other parts of the world.

The hammer evolved from its early informal origins to become part of the Scottish Highland games in the late 18th century, where the original version of the event is still contested today.

Although commonly thought of as a strength event, technical advancements in the last 30 years have developed hammer throw competition to a point where more focus is on speed in order to gain maximum distance.[ citation needed ]

The throwing motion starts with the thrower swinging the hammer back-and-forth about two times to generate momentum. The thrower then makes three, four or (rarely) five full rotations using a complex heel-toe foot movement, spinning the hammer in a circular path and increasing its angular velocity with each rotation. Rather than spinning the hammer horizontally, it is instead spun in a plane that angles up towards the direction in which it will be launched. The thrower releases the hammer as its velocity is upward and toward the target. [2]

The following athletes had their performances (over 77.00 m) annulled due to doping offences:

The discus throw, also known as disc throw, is a track and field event in which an athlete throws a heavy disc—called a discus—in an attempt to mark a farther distance than their competitors. It is an ancient sport, as demonstrated by the fifth-century-BC Myron statue Discobolus. Although not part of the modern pentathlon, it was one of the events of the ancient Greek pentathlon, which can be dated back to at least 708 BC, and it is part of the modern decathlon. 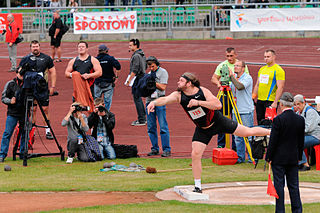 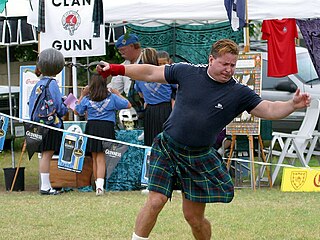 Tatyana Viktorovna Lysenko is a Russian hammer thrower. Her career has been blighted by repeated doping infractions. In February 2019, the Court of Arbitration for Sport handed her an eight-year ban for doping, starting from 2 July 2016.

Anita Włodarczyk is a Polish hammer thrower. She is the 2012, 2016 and 2020 Olympic champion, and the first woman in history to throw the hammer over 80 m; she currently holds the women's world record of 82.98 m. She is considered the greatest women's hammer thrower of all time.

The first World Record in the hammer throw for women (athletics) was recognised by the International Association of Athletics Federations in 1994.

The IAAF Hammer Throw Challenge is an annual hammer throw series, organized by the International Association of Athletics Federations. First held in 2010, the series of hammer throw competitions for men and women are primary held at meetings with IAAF World Challenge status. The rankings are decided by combining the total of each athlete's three greatest throws at the permit events during the season. Further points can be gained by those who break or equal the world record mark for the event.

The men's hammer throw competition at the 2012 Summer Olympics in London, United Kingdom was held at the Olympic Stadium on 3–5 August. There were 41 competitors from 32 nations. The event was won by Krisztián Pars of Hungary, the nation's first victory in the men's hammer throw since 1996 and fifth overall. Primož Kozmus of Slovenia, the 2008 winner, took silver. Koji Murofushi of Japan, the 2004 winner, took bronze. Kozmus and Murofoshi were the 12th and 13th men to earn multiple medals in the hammer throw.

The women's hammer throw competition at the 2012 Summer Olympics in London, United Kingdom. The event was held at the Olympic Stadium on 8–10 August. Each athlete receives three throws in the qualifying round. All who achieve the qualifying distance progress to the final. If less than twelve athletes achieve this mark, then the twelve furthest throwing athletes reach the final. Each finalist is allowed three throws in last round, with the top eight athletes after that point being given three further attempts.

The Janusz Kusociński Memorial is an annual track and field meeting at different venues in Poland, in recent times at the Silesian Stadium in Chorzów, Poland. 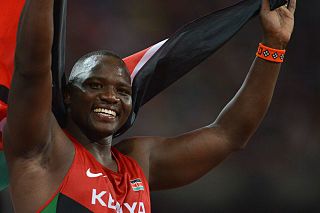 The 2009 European Cup Winter Throwing was held on 14 and 15 March at the Estadio de Los Realejos in Tenerife, Spain. It was the ninth edition of the athletics competition for throwing events and was organised by the European Athletics Association and the Real Federación Española de Atletismo. The competition featured men's and women's contests in shot put, discus throw, javelin throw and hammer throw. In addition to the senior competitions, there were also under-23 events for younger athletes. A total of 226 athletes from 29 nations entered the competition. It was the first time that Spain hosted the competition.

The women's hammer throw competition at the 2016 Summer Olympics in Rio de Janeiro, Brazil. The event was held at the Olympic Stadium on 12–15 August. Each athlete received three throws in the qualifying round. All who achieved the qualifying distance progressed to the final. Each finalist was allowed three throws in last round, with the top eight athletes after that point being given three further attempts.

The women's hammer throw at the 2015 World Championships in Athletics was held at the Beijing National Stadium on 26 and 27 August.

The 2015 IAAF Hammer Throw Challenge was the sixth edition of the annual, global series of hammer throw competitions organised by the International Association of Athletics Federations. The winners were Paweł Fajdek and Anita Włodarczyk, both of Poland. This was Włodarczyk's third straight title and Fajdek's second title, after his win in 2013. Fajdek and Włodarczyk each improved the challenge record totals. Włodarczyk twice broke the hammer throw world record that year, but these marks were achieved outside of the series.

The women's hammer throw at the 2017 World Championships in Athletics was held at the Olympic Stadium on 5 and 7 August.

The women's hammer throw event at the 2020 Summer Olympics took place on 1 and 3 August 2021 at the Japan National Stadium. Approximately 35 athletes competed; the exact number was dependent on how many nations use universality places to enter athletes in addition to the 32 qualifying through distance or ranking.

The women's hammer throw at the 2019 World Athletics Championships was held at the Khalifa International Stadium in Doha from 27 to 28 September 2019.