Racewalking, or race walking, is a long-distance discipline within the sport of athletics. Although a foot race, it is different from running in that one foot must appear to be in contact with the ground at all times. Race judges carefully assess that this is maintained throughout the race. Typically held on either roads or running tracks, common distances range from 3,000 metres (1.9 mi) up to 100 kilometres (62.1 mi).

The sport emerged from a British culture of long-distance competitive walking known as pedestrianism, which began to develop the ruleset that is the basis of the modern discipline around the mid-19th century. Since the mid-20th century onwards, Russian and Chinese athletes have been among the most successful on the global stage, with Europe and parts of Latin America producing most of the remaining top level walkers. However, it has been particularly affected by doping, with many Russian world and Olympic champions testing positive for banned performance-enhancing drugs. [2] [3]

Compared to other forms of foot racing, stride length is reduced; to achieve competitive speeds racewalkers must attain cadence rates comparable to those achieved by world-class 800-1,500 metre runners. [4]

There are only two rules that govern racewalking. [6] [7] The first dictates that the athlete's back toe cannot leave the ground until the heel of the front foot has touched. Violation of this rule is known as loss of contact. The second rule requires that the supporting leg must straighten from the point of contact with the ground and remain straightened until the body passes directly over it. These rules are judged by the unaided human eye. Athletes regularly lose contact for a few milliseconds per stride, which can be caught on film, but such a short flight phase is said to be undetectable to the human eye. [5]

Athletes stay low to the ground by keeping their arms pumping low, close to their hips. If one sees a racewalker's shoulders rising, it may be a sign that the athlete is losing contact with the ground. What appears to be an exaggerated swivel to the hip is, in fact, a full rotation of the pelvis. Athletes aim to move the pelvis forward and to minimize sideways motion in order to achieve maximum forward propulsion. Speed is achieved by stepping quickly with the aim of rapid turnover. This minimizes the risk of the feet leaving the ground. Strides are short and quick, with pushoff coming forward from the ball of the foot, again to minimize the risk of losing contact with the ground. World-class racewalkers (male and female) can average under four and five minutes per kilometre in a 20-km racewalk. [8]

There are judges on the course to monitor form. Three judges submitting "red cards" for violations results in disqualification of the competitor. There is a scoreboard placed on the course so competitors can see their violation status. If the third violation is received, the chief judge removes the competitor from the course by showing a red paddle. For monitoring reasons, races are held on a looped course or on a track so judges get to see competitors several times during a race. A judge could also "caution" a competitor that he or she is in danger of losing form by showing a paddle that indicates either losing contact or bent knees. No judge may submit more than one card for each walker and the chief judge may not submit any cards; it is his or her job only to disqualify the offending walker. Disqualifications are routine at the elite level, such as the famous case of Jane Saville, disqualified within sight of a gold medal in front of her home crowd in the 2000 Summer Olympics, or Yet Lyu, disqualified 20 metres before the finish line at the 2017 World Championships in Athletics.

Racewalking developed as one of the original track and field events of the first meeting of the English Amateur Athletics Association in 1880. The first racewalking codes came from an attempt to regulate rules for popular 19th-century long-distance competitive walking events, called pedestrianism. Pedestrianism had developed, like footraces and horse racing, as a popular working class British and American pastime, and a venue for wagering. Walkers organised the first English amateur walking championship in 1866, which was won by John Chambers, and judged by the "fair heel and toe" rule. This rather vague code was the basis for the rules codified at the first Championships Meeting in 1880 of the Amateur Athletics Association in England, the birth of modern athletics. With football (soccer), cricket, and other sports codified in the 19th century, the transition from professional pedestrianism to amateur racewalking was, while relatively late, part of a process of regularisation occurring in most modern sports at this time.

Racewalking first appeared in the modern Olympics in 1904 in the form of a half-mile (804.672mm) walk in the all-round competition, the precursor to the 10-event decathlon. In 1908, stand-alone 1,500m and 3,000m racewalks were added, and, excluding 1924, there has been at least one racewalk (for men) in every Olympics since.

A World Cup in racewalking is held biennially, and racewalk events appear in the World Athletics Championships, the Commonwealth Games and the Pan American Games, among others.

Since 2003, the IAAF has organised the IAAF Race Walking Challenge, an annual worldwide competition series in which elite athletes accumulate points for the right to compete in the IAAF Race Walking Challenge Final and to share over US$200,000 of prize money. The series of televised events takes place in several countries each year including Mexico, Spain, Russia and China. [10]

Racewalking is sometimes included in high school indoor and outdoor track meets, the rules often more relaxed. The distances walked tend to be relatively short, with the 1500 m being the most commonly held event. Racing also occurs at 3 km, 5 km and 10 km, with records kept and annual rankings published. [11]

1. not ratified by IAAF because it didn’t fulfil the criteria of having the required three international judges present.

1. These times were achieved without the presence of international judges to officiate the competition or post-race doping tests, thus making them invalid for world record status. However, they are accepted as personal best marks for those athletes.

The women's 50 km walk is a new event, having been controversially added to the World Athletics Championships for the first time in 2017. [18]

Racewalking is sometimes derided as a contrived or "artificial" sport. [4] In 1992, noted sportscaster and longtime Olympic commentator Bob Costas compared it to "a contest to see who can whisper the loudest". [24]

In Malcolm in the Middle season 4 episode "Malcolm Holds His Tongue", Hal gets into the sport and exposes his local park rival as 'nothing but a common jogger' by proving that both of his feet leave the ground at once every fourth step.

The 50 kilometre race walk was an Olympic athletics event that first appeared in 1932 and made its final Olympic appearance in 2021. The racewalking event is competed as a road race. Athletes must always keep in contact with the ground and the supporting leg must remain straight until the raised leg passes it.

Érick Bernabé Barrondo García is a Guatemalan racewalker who competes in the 20 km walk and 50 km walk events. He won the silver medal at the Men's 20 km Racewalk in the 2012 Summer Olympics, the first and only Olympic medal in Guatemala's history.

Anežka Drahotová is a Czech athletics competitor in racewalking, middle-distance running, and steeplechase, as well an international-level cyclist. She is the Czech record holder for the 20 kilometres walk and the 10 km track walk.

Evan Dunfee is a Canadian race walker and Olympian. An Olympic and World medallist, Dunfee first set the Canadian record in the 50 kilometres race walk at the 2016 Summer Olympics, where he placed fourth. He went on to win bronze medals at the 2019 World Athletics Championships and the 2020 Summer Olympics, both of those the last time the 50 km was to be featured as an event.

Marion Fawkes is a British former racewalker. She was the first official female world champion in racewalking through her victory at the 1979 IAAF World Race Walking Cup. She broke four world records in her career.

Siv Gustavsson is a Swedish former racewalking athlete. She was the gold medallist at the 1981 IAAF World Race Walking Cup, making her the second ever female world champion in the sport.

Sandeep Kumar is an Indian racewalker. He competed in the 50 kilometres walk event at the 2015 World Championships in Athletics in Beijing, China.

Manish Singh Rawat is a male Indian racewalker. He competes in the 20 km and the 50 km events and is employed by the Uttarakhand State Police. He has been part of the Indian racewalking squad for the past 3 years. 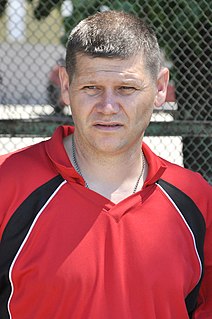 Vitaliy Popovich is a Ukrainian male former racewalking athlete who competed in the 50 kilometres race walk. He competed in the men's 50 kilometres walk at the 1988 Summer Olympics, representing the Soviet Union, and in the same event at the 1996 Summer Olympics, representing Ukraine. He was a three-time participant at the World Championships in Athletics, with a best of fourth at the 1991 event. He also competed at five straight editions of the IAAF World Race Walking Cup from 1989 to 1997. He set a personal best of 3:43:57 hours for the distance in 1989. 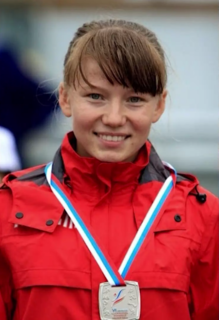 Klavdiya Afanasyeva is a Russian racewalker. She won gold medals in the European U20 and U23 championships in the 10,000 m race walk and 20 km race walk respectively. Though she has never tested positive for an anti-doping violation, in May 2018 she was suspended from international competition due to participating in a training camp including banned coach Viktor Chegin.

Liang Rui is a female Chinese racewalking athlete who competes in the 20 kilometres and 50 kilometres race walk. She was the world record holder for the 50 km walk event and was a gold medalist at the 2018 IAAF World Race Walking Team Championships. In 2019 her record was beaten by Hong Liu with a time of 3:59:15. In the same year, she finished outside the top ten in the IAAF Challenge races in Taicang and La Coruña, and was seventh in a national 50 km meeting.

Wikimedia Commons has media related to Race walking .
This page is based on this Wikipedia article
Text is available under the CC BY-SA 4.0 license; additional terms may apply.
Images, videos and audio are available under their respective licenses.