Hand walking is an unusual form of human locomotion in which a person travels in a vertically inverted orientation with all body weight resting on the hands. It can be executed with legs fully extended or with variations such as stag, straddle or front splits. Hand walking is performed in various athletic activities, including acro dance and circus acrobatics.

Hand walking is a skill that relies on a prerequisite ability to perform handstands, which in turn requires adequate upper body pressing strength in the deltoids and triceps as well as a heightened sense of balance and spatial awareness. Because the body is inverted during hand walking, blood pressure in the brain is greater than normal.

As with other physical skills, one must practice hand walking in order to become proficient and develop adequate endurance. Handstands and hand walking are often learned at the same time because hand walking can be used to help maintain balance in a handstand before one learns to perform a stable handstand. Balance can also be maintained by varying the arch of the back.

Bipedalism is a form of terrestrial locomotion where an organism moves by means of its two rear limbs or legs. An animal or machine that usually moves in a bipedal manner is known as a biped, meaning "two feet". Types of bipedal movement include walking, running and hopping.

Gait is the pattern of movement of the limbs of animals, including humans, during locomotion over a solid substrate. Most animals use a variety of gaits, selecting gait based on speed, terrain, the need to maneuver, and energetic efficiency. Different animal species may use different gaits due to differences in anatomy that prevent use of certain gaits, or simply due to evolved innate preferences as a result of habitat differences. While various gaits are given specific names, the complexity of biological systems and interacting with the environment make these distinctions "fuzzy" at best. Gaits are typically classified according to footfall patterns, but recent studies often prefer definitions based on mechanics. The term typically does not refer to limb-based propulsion through fluid mediums such as water or air, but rather to propulsion across a solid substrate by generating reactive forces against it. 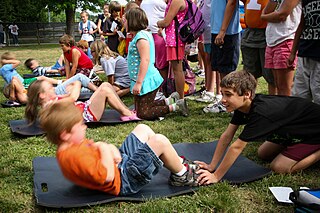 Calisthenics or callisthenics is a form of strength training consisting of a variety of movements that exercise large muscle groups, such as standing, grasping, pushing, etc. These exercises are often performed rhythmically and with minimal equipment, as bodyweight exercises. They are intended to increase strength, fitness, and flexibility, through movements such as pulling, pushing, bending, jumping, or swinging, using one's body weight for resistance. Calisthenics can provide the benefits of muscular and aerobic conditioning, in addition to improving psychomotor skills such as balance, agility, and coordination.

The upper limbs or upper extremities are the forelimbs of an upright-postured tetrapod vertebrate, extending from the scapulae and clavicles down to and including the digits, including all the musculatures and ligaments involved with the shoulder, elbow, wrist and knuckle joints. In humans, each upper limb is divided into the arm, forearm and hand, and is primarily used for climbing, lifting and manipulating objects. 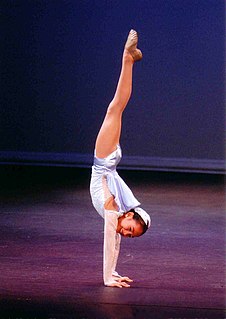 A handstand is the act of supporting the body in a stable, inverted vertical position by balancing on the hands. In a basic handstand, the body is held straight with arms and legs fully extended, with hands spaced approximately shoulder-width apart and the legs together. There are many variations of handstands, all of which require the performer to possess adequate balance and upper body strength.

Robot locomotion is the collective name for the various methods that robots use to transport themselves from place to place.

Knuckle-walking is a form of quadrupedal walking in which the forelimbs hold the fingers in a partially flexed posture that allows body weight to press down on the ground through the knuckles. Gorillas and chimpanzees use this style of locomotion as do anteaters and platypuses.

A freeze is a b-boying technique that involves halting all body motion, often in an interesting or balance-intensive position. It is implied that the position is hit and held from motion as if freezing in motion, or into ice. Freezes often incorporate various twists and distortions of the body into stylish and often difficult positions.

Terrestrial locomotion has evolved as animals adapted from aquatic to terrestrial environments. Locomotion on land raises different problems than that in water, with reduced friction being replaced by the increased effects of gravity. 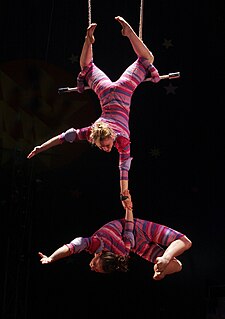 Static trapeze, also known as fixed trapeze, is a type of circus art performed on the trapeze. In contrast to the other forms of trapeze, on static trapeze the bars and ropes mainly stay in place.

Legged robots are a type of mobile robot which use articulated limbs, such as leg mechanisms, to provide locomotion. They are more versatile than wheeled robots and can traverse many different terrains, though these advantages require increased complexity and power consumption. Legged robots often imitate legged animals, such as humans or insects, in an example of biomimicry.

The evolution of human bipedalism, which began in primates about four million years ago, or as early as seven million years ago with Sahelanthropus, or about 12 million years ago with Danuvius guggenmosi, has led to morphological alterations to the human skeleton including changes to the arrangement and size of the bones of the foot, hip size and shape, knee size, leg length, and the shape and orientation of the vertebral column. The evolutionary factors that produced these changes have been the subject of several theories.

This is a general glossary of the terms used in the sport of gymnastics. 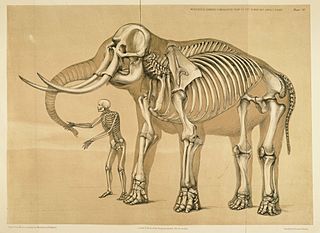 Comparative foot morphology involves comparing the form of distal limb structures of a variety of terrestrial vertebrates. Understanding the role that the foot plays for each type of organism must take account of the differences in body type, foot shape, arrangement of structures, loading conditions and other variables. However, similarities also exist among the feet of many different terrestrial vertebrates. The paw of the dog, the hoof of the horse, the manus (forefoot) and pes (hindfoot) of the elephant, and the foot of the human all share some common features of structure, organization and function. Their foot structures function as the load-transmission platform which is essential to balance, standing and types of locomotion.

Crawling or quadrupedal movement is a method of human locomotion that makes use of all four limbs. It is one of the earliest gaits learned by human infants, and has similar features to four-limbed movement in other primates and in non-primate quadrupeds.

Arm swing in human bipedal walking is a natural motion wherein each arm swings with the motion of the opposing leg. Swinging arms in an opposing direction with respect to the lower limb reduces the angular momentum of the body, balancing the rotational motion produced during walking. Although such pendulum-like motion of arms is not essential for walking, recent studies point that arm swing improves the stability and energy efficiency in human locomotion. Those positive effects of arm swing have been utilized in sports, especially in racewalking and sprinting.