Marathon swimming is a class of open water swimming defined by long distances (at least 10 kilometers) and traditional rules based in English Channel swimming [1] [2] . Unlike marathon foot-races which have a specifically defined distance, marathon swims vary in distance. However, one commonly used minimum definition is 10 kilometers, the distance of the marathon swimming event at the Olympic Games. [3]

As in all open water swimming, tides, surface currents and wind-chop are major determinants of finish-times. For a given course, these factors can vary dramatically from day to day, making any attempt to draw conclusions about athletic ability by comparing finish times from performances undertaken on different days meaningless.

One of the earliest marathon swims was accomplished in 1875 by Captain Matthew Webb, when he became the first person to swim across the English Channel. Similarly, perhaps the most famous marathon swim of all time was accomplished in 1926 by Gertrude Ederle, when she became, at 19 years of age, the first woman to swim across the English Channel. In doing so, she demolished the existing world record for the crossing, by employing the crawl stroke technique.

The Triple Crown of Open Water Swimming includes three of the most well-known marathon swims: (1) 21 mi (34 kilometres) across the English Channel, (2) 20.1 mi (32.3 kilometres) between Catalina Island and the mainland in Southern California, USA, and (3) 28.5 mi (45.9 kilometres) around Manhattan Island in New York City, USA.

Long-distance swimming is distinguished from ordinary swimming in that the distances involved are longer than are typically swum in pool competitions. When a given swim calls more on endurance than on outright speed, it is the more likely to be considered a long-distance swim. Long-distance swims, however, may take place in pools, such as the 1st official 24 hours World Championship in 1976 won by Peppo Biscarini with a record of 83.7 km or the current 25 meter pool world record of 2008 Olympic gold medalist Maarten van der Weijden Some of the better-known long-distance swims are crossings of the English Channel, Catalina Channel, Fehmarn Belt and Cook Strait.

The North Channel or Irish Channel is the strait between north-eastern Northern Ireland and south-western Scotland. It connects the Irish Sea with the Atlantic Ocean, and is part of the marine area officially classified as the "Inner Seas off the West Coast of Scotland" by the International Hydrographic Organization (IHO). 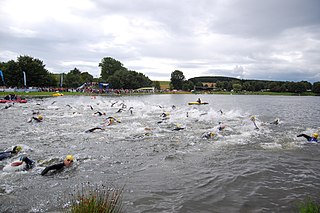 Open water swimming is a swimming discipline which takes place in outdoor bodies of water such as open oceans, lakes, and rivers.

The Rottnest Channel Swim is an annual open water swimming event from Cottesloe Beach through Gage Roads to Rottnest Island, off the coast of Western Australia, near Perth. The distance is 19.7 kilometres and it is one of the largest open-water swimming events in the world, with 2400 swimmers participating in the 2015 event.

Alison Jane Streeter MBE is a British long-distance swimmer. She has swum across the English Channel 43 times, more than anyone else. She also completed seven Channel crossings in one year. Her 1988 Channel swim from France to England of set a female record of 8 hours 48 minutes. She was the first woman to swim the Channel three ways non-stop in 1990, taking 34h40 min for the feat.

George Young was a Canadian marathon swimmer who on 15–16 January 1927 became the first swimmer to cross the channel between Catalina Island and the mainland of California. This took place during a contest called the Wrigley Ocean Marathon, sponsored by chewing gum and sports magnate William Wrigley, Jr. Young was the only person to complete the 35-kilometer (22 mi) swim, which took him 15 hours and 44 minutes. This feat earned him a prize of $25,000 and the nickname "The Catalina Kid". He was inducted into Canada's Sports Hall of Fame in 1955 and into the International Swimming Hall of Fame in 2014.

Petar Stoychev is a Bulgarian swimmer who is one of the most successful long distance marathon swimmers in history. He is one of the greatest marathon swimmers of all time and an honor swimmer in the International Marathon Swimming Hall of Fame. Stoychev has 11 consecutive titles of a major international open water marathon swimming FINA series since 2001 with more than 60 wins in individual swimming marathons. So far, he has swum over 60,000 km in pools, rivers, lakes, seas and oceans. Petar Stoychev has won 11 consecutive victories at the Traversée Internationale du Lac Memphrémagog in Magog, Canada (34 km) and at Lac Saint-Jean in Roberval, Canada (32 km). Also, he has won the Ohrid Lake, Macedonia swimming marathon 11 consecutive times (30 km). His swimming achievements include swimming around the Manhattan Island in 2010 and winning the extreme Cadiz Freedom Swim in 2011.

Aditya Santosh Raut is an international open water swimmer, known for breaking many swimming records at a young age. At age 9 in 2002, he completed a 21-hour, 70-kilometre double crossing of the channel between Mumbai and Dharamtar. In 2009, at 16, he became the first person to swim nine channels in nine countries. He was the youngest person to swim the Cook Strait, the Strait of Gibraltar and the English Channel, and he holds many other world records for swimming. He is currently enrolled in Alliance University, Bangalore.

The Oceans Seven is a marathon swimming challenge consisting of seven open water channel swims. It was devised in 2008 as the swimming equivalent of the Seven Summits mountaineering challenge. It includes the North Channel, the Cook Strait, the Molokaʻi Channel, the English Channel, the Catalina Channel, the Tsugaru Strait and the Strait of Gibraltar.

Chloe McCardel, born 10 May 1985, is an open water swimmer and swim coach from Melbourne, Australia.

Michelle Davidson, is a U.S. Masters Swimmer and a long distance, open water swimmer. She is one of only 84 swimmers in the world who have ever accomplished the Triple Crown of swimming.

Taranath Narayan Shenoy, is a deaf and visually impaired Indian swimmer and an honoree of the International Marathon Swimming Hall of Fame. He is a winner of the Triple Crown of Open Water Swimming, having successfully completed the English Channel, Catalina Channel and the Manhattan Island Marathon Swim. The Government of India awarded him the fourth highest civilian award of Padma Shri in 1990. 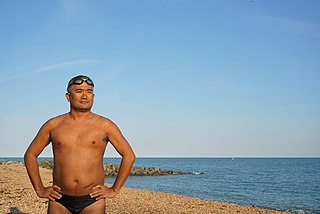 Ingemar Macarine is a Filipino long-distance swimmer, marathoner and environmental lawyer, currently serving as election officer of Tubigon town in Bohol, a province of the Philippines. Macarine pioneered the open water marathon swimming in the Philippines by crossing several channels in the country.

Kimberley Chambers is a marathon open water swimmer from New Zealand. She is one of only a few people to complete the Ocean's seven swimming challenge. In 2015, she became the first woman to swim from the Farallon Islands to the Golden Gate Bridge – a distance of about 30 miles.

Wang Han is a Taiwanese actor and swimmer.