The 5th IAAF World Indoor Championships in Athletics were held at the Palau Sant Jordi in Barcelona, Catalonia, Spain from 10 March to 12 March 1995. Almost 600 athletes from 131 nations participated in 27 events.

Palau Sant Jordi is an indoor sporting arena and multi-purpose installation that is part of the Olympic Ring complex located in Barcelona, Catalonia, Spain. Designed by the Japanese architect Arata Isozaki, it was opened in 1990. The maximum seating capacity of the arena is 17,960. It is the largest indoor arena in Spain.

Catalonia is an autonomous community on the northeastern corner of Spain, self-designated as a nationality by its Statute of Autonomy. Catalonia consists of four provinces: Barcelona, Girona, Lleida, and Tarragona. The capital and largest city is Barcelona, the second-most populated municipality in Spain and the core of the sixth most populous urban area in the European Union. It comprises most of the territory of the former Principality of Catalonia. It is bordered by France (Occitanie) and Andorra to the north, the Mediterranean Sea to the east, and the Spanish autonomous communities of Aragon to the west and Valencia to the south. The official languages are Catalan, Spanish, and the Aranese dialect of Occitan.

Larisa Alexandrovna Peleshenko, née Agapova is a retired Russian shot putter best known for winning the Olympic silver medal in 2000. In her early career she won European Indoor silver medals, but in February 1995 she received a four-year drugs ban. Having originally won the 1995 World Indoor Championships, she lost the medal. She won the 2001 Indoor Championships and finished fourth at the World Championships the same year, and retired at the end of the season.

Algeria, officially the People's Democratic Republic of Algeria, is a sovereign state in the Maghreb region of North Africa. The capital and most populous city is Algiers, located in the far north of the country on the Mediterranean coast. With an area of 2,381,741 square kilometres (919,595 sq mi), Algeria is the tenth-largest country in the world, the world's largest Arab country, and the largest in Africa. Algeria is bordered to the northeast by Tunisia, to the east by Libya, to the west by Morocco, to the southwest by the Western Saharan territory, Mauritania, and Mali, to the southeast by Niger, and to the north by the Mediterranean Sea. The country is a semi-presidential republic consisting of 48 provinces and 1,541 communes (counties). It has the highest human development index of all the non-island African countries.

Andorra, officially the Principality of Andorra, also called the Principality of the Valleys of Andorra, is a sovereign landlocked microstate on the Iberian Peninsula, in the eastern Pyrenees, bordered by France to the north and Spain to the south. Believed to have been created by Charlemagne, Andorra was ruled by the Count of Urgell until 988, when it was transferred to the Roman Catholic Diocese of Urgell. The present principality was formed by a charter in 1278. It is known as a principality as it is a diarchy headed by two Princes: the Catholic Bishop of Urgell in Catalonia, Spain, and the President of France.

The 28th European Athletics Indoor Championships were held at the Palacio de Deportes in Madrid, the capital city of Spain, from Friday, 4 March to Sunday, 6 March 2005. This was the first edition to be held in an odd year since switching to the biennial format, so as not to occur in the same as the outdoor European Athletics Championships and also recently moved IAAF World Indoor Championships. To accommodate this change, there was a two-year gap since the previous edition. It also marked the last time that the 200 metres were contested at the event.

The 9th IAAF World Indoor Championships in Athletics were held in the National Indoor Arena in Birmingham, UK from 14 to 16 March 2003. It was the first time the Championships had been held in the UK. There were a total number of 589 participating athletes from 133 countries. 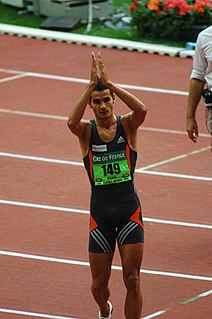 The 6th IAAF World Indoor Championships in Athletics were held at the Palais Omnisports de Paris-Bercy in Paris, France from March 7 to March 9, 1997. It was the first athletic championships to introduce women's pole vault. There were a total number of 712 participating athletes from 118 countries.

The 1st IAAF World Indoor Championships in Athletics were held in Indianapolis, United States from March 6 to March 8, 1987. The championship had previously been known as the World Indoor Games, which were held once before changing the name.

Giorgio Rubino is an Italian race walker, bronze medal in the 20 km walk at the 2009 World Championships in Berlin.

Italy competed at the 2009 World Championships in Athletics, held from August 15 to August 23. On August 3, the Italian national athletics federation (FIDAL) revealed the final team composed of 40 athletes, but on 8 August, after a last test competition in Grosseto, Andrew Howe, in accordance with FIDAL, decided not to compete in Berlin. Just before publishing the team, Faloci, a discus thrower, also decided not to compete.

The fifteenth edition of the IAAF World Championships was held 22–30 August 2015 in Beijing, China. 43 nations won medals, 144 of which were awarded. Kenya topped the medal table for the first time, with 7 gold, 6 silver and 3 bronze medals. The United States won 18 medals, six gold, six silver and six bronze, which was the highest tally. Host nation China, finished 11th on the medals table, while Russia finished ninth.

The 16th IAAF World Indoor Championships in Athletics were held between March 17 and 20, 2016 in Portland, Oregon, United States.

The women's 1500 metres event at the 1995 IAAF World Indoor Championships was held on 12 March.