Water skiing is a surface water sport in which an individual is pulled behind a boat or a cable ski installation over a body of water, skimming the surface on two skis or one ski. The sport requires sufficient area on a smooth stretch of water, one or two skis, a tow boat with tow rope, three people, and a personal flotation device. In addition, the skier must have adequate upper and lower body strength, muscular endurance, and good balance. 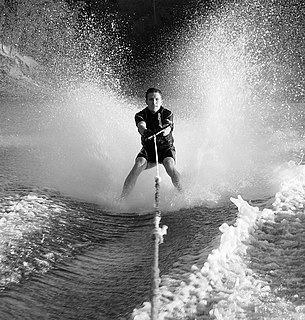 Jimmy Siemers is a professional 3-event water skier. He is currently on the MasterCraft Pro Ski Team and is a previous world record-holder in the jump event, with a 236-foot jump 66.8 meters. He is a former member of the Arizona State University Water Ski Team, for which he won the trick event at collegiate nationals four times in his four years on the team.

Richard Downing Pope Jr., better known as Dick Pope Jr., was a World Champion water skier and an important business leader in Central Florida. Pope was an important innovator in the sport of water skiing, including the development of barefoot skiing in 1947. He is the son of Dick Pope Sr., the founder of Cypress Gardens theme park.

Deena Mapple is a retired American competitive water skier. She is regarded to be one of the greatest female water skiers of her generation. Her Grand Slam Victory in 1987 - overall wins in the World Championships, U.S. Nationals, U.S. Masters and the Pro Tour - made her one of two athletes to ever accomplish the feat. She remains the only American to earn membership to the United States Waterskiing Team seven consecutive times. 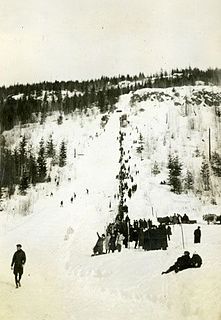 Nels Nelsen Hill, originally Big Hill, is an abandoned ski jumping hill located in Mount Revelstoke National Park near the town of Revelstoke, British Columbia, Canada. The original hill, Big Hill, was built in 1916 and was the first permanent ski jump in Canada. By 1933, four world length records had been set on the Big Hill. It fell out of use in 1939, with Revelstoke instead using the Big Bend Ski Jump.

Wayne is a Hall of Fame water skier. He competed for the United States in the 1972 Summer Olympics in Germany, winning two silver medals in the water skiing. Grimditch would go on to establish 10 U.S. national jumping records and four world marks in the sport. He earned 16 national titles and was the first skier to earn jumping records in the Junior Boy's, Boy's and Men's divisions simultaneously. Grimditch was known as a child prodigy qualifying for his first national tournament in slalom at just nine years old and winning the world jumping title in Copenhagen, Denmark at age 14. Due to a concussion, he began wearing a helmet which became common to the sport—though not a requirement—thereafter.

Mike Seipel is a retired American competitive barefoot water skier. He was considered to be one of the greatest barefoot water skiers in the world. He was a member of the United States Barefoot Team and was a two-time overall world champion in 1984-85 and 1986–87. Seipel didn't win any medals at his first Worlds, but he launched a sports career that would eventually earn him 11 National titles, six World titles and nine World records. He skied on eight U.S. Barefoot Water Ski Teams and has since trained numerous National and World champions at his Barefoot International Ski School. Mike invented the inverted barefoot jumping technique, which he first attempted in competition at the world championships in 1990. This technique is now used by all the top competitors around the world and has allowed the world record to be extended up to almost 30m. Mike was also well known for being the first footer to do tricks like one-foot 360 turns and a stepover back-to-front feet-to-feet in competition.

Keith St. Onge is a professional barefoot water skier. He holds the record for the most U.S. National Overall Pro titles at fourteen, a record previously held by Ron Scarpa. Keith is a two-time World Barefoot Champion, winning Overall titles in 2006 and 2008.

Julia Gromyko is a Belarusian-German water skier. As of 2004 she was the world record holder in the tricks and jump events.

Willa McGuire Cook was the winner of 18 national titles in water skiing. She was the first freestyle water skier, and had a unique and creative approach to her sport. In the 1950s, Cook invented swivel skiing, a style of water skiing that became hugely successful around the world, which combines the moves of ballet with water skiing by using swivel bindings on the ski. Today there is a trophy in her name, which is awarded to the best female performer at the National Water Ski Show Tournament each year.