In 1932, the Indian Express was started by an Ayurvedic doctor, P. Varadarajulu Naidu, at Chennai, being published by his "Tamil Nadu" press. Soon under financial difficulties, he sold the newspaper to Swaminathan Sadanand, the founder of The Free Press Journal , a national news agency. In 1933, the Indian Express opened its second office in Madurai, launching the Tamil edition, Dinamani . Sadanand introduced several innovations and reduced the price of the newspaper. Faced with financial difficulties, he sold a part of his stake to Ramanath Goenka as convertible debentures. In 1935, when The Free Press Journal finally collapsed, and after a protracted court battle with Goenka, Sadanand lost ownership of Indian Express. [5] In 1939 Goenka bought Andhra Prabha , another prominent Telugu daily newspaper. The name Three Musketeers was often used for the three dailies namely, Indian Express, Dinamani and Andhra Prabha.

In 1940 the whole premises was gutted by fire. The Hindu , a rival newspaper, helped considerably in re-launching the paper, by getting it printed temporarily at one of its Swadesimithran's press and later offering its recently vacated premises at 2, Mount Road, on rent to Goenka, which later became the landmark Express Estates. [6] This relocation also helped the Express obtain better high speed printing machines. The district judge who did inquiry into the fire concluded that a short circuit or a cigarette butt could have ignited the fire and said that the growing city had inadequate fire control support. [6] In 1952, the paper had a circulation of 44,469. [7]

After Ramnath Goenka's death in 1991, two of the grandsons, Manoj Kumar Sonthalia and Vivek Goenka split the group into two. Indian Express Mumbai with all the North Indian editions went to Vivek Goenka, and all the Southern editions which were grouped as Express Publications Madurai Limited with Chennai as headquarters went to MK Sonthalia. [8] [9] Indian Express began publishing daily on the internet on 8 July 1996. Five months later, the website expressindia.com attracted "700,000 hits every day, excepting weekends when it fell to 60% of its normal levels". [10]

Eenadu daily newspaper is the largest circulated Telugu newspaper in the State of Andhra Pradesh and the State of Telangana of India. According to the Indian Readership Survey (IRS) Q1 2019, Eenadu ranks at number four among the Indian-language regional dailies with a total readership (TR) of 15,673,000. Eenadu was founded by Ramoji Rao in 1974. Eenadu later ventured into other markets such as finance and chit funds, foods, film production, film distribution, and television (ETV). All the businesses are organized under the Ramoji Group.

Dinamani is a Tamil daily newspaper. The newspaper was established in 1933 and is owned by The New Indian Express Group. The first edition was published on 11 September. It is printed and published from Bangalore, Chennai, Coimbatore, Dharmapuri, Madurai, New Delhi, Tirunelveli, Tiruchirappalli, Vellore and Villupuram.

Ramnath Goenka was an Indian newspaper publisher. He launched The Indian Express in 1932 and created the Indian Express Group with various English and regional language publications. In 2000, India Today magazine, named him amongst their list of "100 People Who Shaped India". The Ramnath Goenka Excellence in Journalism Awards, named after Ramnath Goenka, have become one of the most prestigious award functions for Indian journalists.

Andhra Prabha is a Telugu language daily newspaper published in India. The website (www.prabhanews.com) is now owned by the New Indian Express Group of Companies but the news paper was sold to entrepreneurs from Kakinada, Andhra Pradesh.

Kannada Prabha is a morning daily jointly owned by Jupiter Capital a company founded by Rajeev Chandrasekhar who is Bharatiya Janata Party’s member of parliament and The New Indian Express Group, is a major Kannada newspaper in Karnataka. The tag line on its masthead is The Most Powerful Kannada Newspaper. It was founded by Ramnath Goenka.

Vinod Dua is an Indian journalist, who worked in Doordarshan and NDTV India.

Bhagwan Das Goenka was the only son of Ramnath Goenka, a newspaper baron of India. He was a manager of The Indian Express and had been described as the "inveterate foe" of the Nehru family".

RmT Sambandham or Irama. Thirugnanasambandham, was an editor of Dinamani, a Tamil daily newspaper published in India. He was born in Pudukkottai district, Tamil Nadu and died on 14 August 2007 at his residence in Chennai. 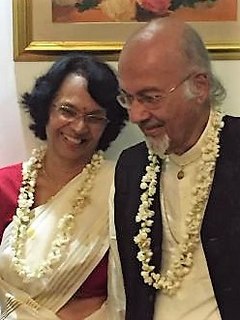 Thayil Jacob Sony George is an Indian writer and biographer who received a Padma Bhushan award in 2011 in the field of literature and education. The fourth of eight siblings, TJS was born in Kerala, India to Thayil Thomas Jacob, a magistrate, and Chachiamma Jacob, a homemaker. Although his roots are in Thumpamon, Kerala, he lives in Bangalore and Coimbatore with his wife Ammu. He has a daughter, Sheba Thayil and a son, Jeet Thayil. American TV journalist Raj Mathai is his nephew. 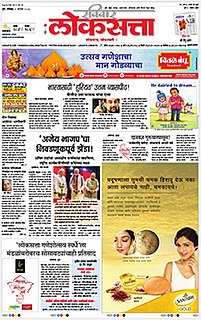 Loksatta (Lōksattā) is a Marathi daily newspaper in Maharashtra, India. It is published by The Indian Express Group and was launched on 14 January 1948. Loksatta is published out of Mumbai, Pune, Nagpur, Thane, Palghar, Ahmednagar, Amravati, Aurangabad and Nashik.

Ravish Kumar is an Indian journalist, author and media personality. He is the Senior Executive Editor of NDTV India. He hosts a number of programmes including the channel's flagship weekday show Prime Time, Hum Log,Ravish Ki Report and Des Ki Baat.

The Ramnath Goenka Excellence in Journalism Awards are one of the most prestigious awards in India in the field of journalism. Named after Ramnath Goenka, the awards have been held annually since 2006, with the 12th edition being held in 2017. The awards are given for both print journalism as well as broadcast journalism, with a total of 25 different prizes being awarded in 2017 for excellence in journalism during 2016.

Scroll.in, simply referred to as Scroll, is an Indian Hindi and English language digital news publication owned by the Scroll Media Incorporation. Founded in 2014, the website and its journalists have won several national and international awards including four Ramnath Goenka Excellence in Journalism Awards and the CPJ International Press Freedom Awards. 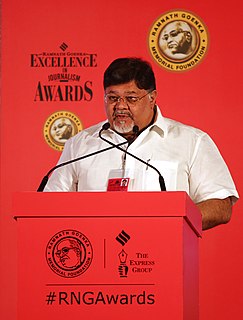 India Ahead is a nationwide English News Channel. It is promoted by Andhra Prabha Media Group and launched in June, 2018. The Channel carries news, current affairs, entertainment sports and business programming from Indian as well as International Perspective. It's the first English news channel to be beamed out of South India.

Uma Sudhir is an Indian journalist, who is the executive editor of the South Indian division of the television news network NDTV. Sudhir has been the recipient of a number of prestigious awards including the Ramnath Goenka Excellence in Journalism Award and the Chameli Devi Jain Award for Outstanding Women Mediapersons.