Mammut Sports Group AG is a Swiss multinational mountaineering and trekking company headquartered in Seon, Switzerland. The company was founded in 1862 by Kaspar Tanner in Dintikon. Until 2021, Mammut belonged to Conzzeta AG [1] (now known as Bystronic AG [2] ), at which point they were sold to Telemos Capital. [3] Amongst others, Raichle (mountain and trekking shoes), Ajungilak (sleeping bags) and Toko (ski wax) belong to Mammut Sports Group. [4]

In 2011, Mammut obtained a sales volume of 210.8 million CHF. Mammut has about 200 employees at its headquarters and runs many establishments all over the world. The central repository for Europe is in Memmingen, Germany, which has been expanded several times.

In April 2003, Mammut purchased Raichle, from Austrian owners Kneissl, although Raichle had originally been founded in Kreuzlingen, Switzerland. [5]

While Raichle had been making boots for about 100 years, as of March 2009 [update] , former Raichle products are now marketed as Mammut. [6]

FC Basel 1893, widely known as FC Basel, FCB, or just Basel, is a Swiss football club based in Basel, in the Canton of Basel-Stadt. Formed in 1893, the club has been Swiss national champions 20 times, Swiss Cup winners 13 times, and Swiss League Cup winners once.

Swisscom AG is a major telecommunications provider in Switzerland. Its headquarters are located in Ittigen near Bern. The Swiss government owns 51.0 percent of Swisscom AG. According to its own published data, Swisscom holds a market share of 56% for mobile, 50% for broadband and 37% for TV telecommunication in Switzerland. Its Italian subsidiary Fastweb is attributed 16% of private clients and 29% of corporate clients share of Italian broadband and is also active in the mobile market. 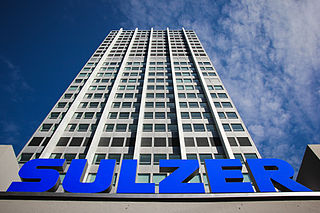 Sulzer Ltd.[ˈzʊlt͡sɐ] is a Swiss industrial engineering and manufacturing firm, founded by Salomon Sulzer-Bernet in 1775 and established as Sulzer Brothers Ltd. in 1834 in Winterthur, Switzerland. Today it is a publicly traded company with about 180 manufacturing facilities and service centers around the world. The company's shares are listed on the Swiss Stock Exchange.

TUI Group is a German leisure, travel and tourism company. TUI is an acronym for Touristik Union International "Tourism Union International". TUI AG was known as Preussag AG until 1997 when the company changed its activities from mining to tourism. It is headquartered in Hanover, Germany.

Eastern Mountain Sports is an outdoor clothing and equipment retailer in the U.S. Northeast headquartered in Meriden, Connecticut.

Julius Bär Group AG, known alternatively as Julius Baer Group Ltd., is a private banking corporation founded and based in Switzerland. Headquartered in Zürich, it is among the older Swiss banking institutions. In terms of assets under management, Julius Baer is number three among Swiss banks after the two generalists UBS and Credit Suisse and the biggest pure-play private bank.

SC Langnau Tigers are a professional ice hockey team from Langnau im Emmental, Switzerland. They play in the National League (NL). The team plays its home games in the 6,000-seat Ilfis Stadium, which is currently the smallest arena in the NL.

OC Oerlikon is a listed technology group headquartered in Pfäffikon (Schwyz), Switzerland. The name “Oerlikon” comes from the Oerlikon district in Zurich where the group has its origins.

Elm is a village, and former municipality, in the municipality of Glarus Süd and canton of Glarus in Switzerland. Elm lies in the valley of the Sernf river, and consists of the village of Elm itself, and the hamlets of Sulzbach, Schwändi, Müsli, Untertal, Vogelsang, Töniberg, Obmoos, Steinibach and Wald.

Kneissl is a manufacturer of handmade skis, biking and tennis equipment and apparel, based in Kufstein, Tyrol, Austria.

GAM Investments is an independent, pure play asset management group headquartered in Zurich. The Group sells to a wide range of client segments such as institutions, wholesale intermediaries, financial advisers, and private investors. The Group’s investment management business is complemented by a private labelling unit which provides outsourcing for third-party asset managers.

Smart is a German automotive brand. Smart Automobile Co., Ltd. is a joint venture established by Mercedes-Benz AG and Zhejiang Geely Holding Group in 2019 and aimed at producing Smart-badged cars in China to be marketed globally. The venture is headquartered in Ningbo. It produces small battery electric vehicles in their manufacturing plant in China, while previously the brand was known to produce microcars and subcompacts, primarily the Fortwo and Forfour, at the Smartville in Hambach, Moselle, France and in the Revoz plant. Its distribution, marketing and aftersales activities in Europe are currently handled by smart Europe GmbH which is headquartered in Stuttgart, Germany.

Block, Inc., formerly Square, Inc., is an American financial services and digital payments company based in San Francisco, California. The company was founded in 2009 by Jack Dorsey and Jim McKelvey and launched its first platform in 2010. It has been traded as a public company on the New York Stock Exchange since November 2015 with the ticker symbol SQ.

Sunrise UPC GmbH, doing business as Sunrise, is a Swiss telecommunications provider based in Zurich, owned by Liberty Global. It provides mobile, TV and landline phone and internet services. Since February 2019, Sunrise headquarters are located at Thurgauerstrasse 101b, Glattpark Opfikon. Formerly a subsidiary of TDC A/S, Sunrise had been owned by CVC Capital Partners until 2015. In February 2015, CVC realised an IPO on the SIX Swiss Exchange. Since then, Sunrise stocks are publicly traded at the Swiss Stock Exchange. In August 2020, Liberty Global announced that it will be acquiring Sunrise for $7.4 billion. The transaction was completed on November 11, 2020.

bet-at-home.com AG is a European online gambling and sports betting company that was founded in 1999.

Vontobel Holding AG is a Swiss private banking and investment management group headquartered in Zurich. Established in 1924, as of August 2021, Vontobel has over 2,000 employees across 26 worldwide locations. Vontobel group's core businesses are Wealth Management, Asset Management and Digital Investing, catering to wealthy private clients as well as institutional investors. Among the top tier Swiss banks, Vontobel holds around $300 billion of client assets.

Paramount+ is an American subscription video on-demand service owned by Paramount Global. The service's content is drawn primarily from the libraries of CBS Media Ventures, Paramount Media Networks, and Paramount Pictures, while also including original series and films, live streaming sports coverage, and in the U.S., live streaming of local CBS broadcast stations.