Millet Mountain Group is a French-based company, headquartered in Annecy, specializing in outdoor equipment such as backpacks and sleeping bags. In 2014, Millet was acquired by Swiss holding Calida group. [1] In January 2022, Calida agreed to sell Millet to Jean-Pierre Millet, grandson of Millet's founder, and Inspiring Sport Capital (ISC), a private equity company dedicated to the sports industry. [2] Completion of the transaction is expected in the second quarter of 2022.

Millet also offers a wide variety of other equipment, earning comparisons to United States-based companies such as Timberland and Columbia Sportswear.

Millet is not related to Millets, a UK chain of shops selling outdoor clothing. [3]

Recreational Equipment, Inc., commonly known as REI, is an American retail and outdoor recreation services corporation. It is organized as a consumers' co-operative. REI sells camping gear, travel equipment, and clothing. It also offers services such as outdoor-oriented vacations and courses.

Brunswick Corporation, formerly known as the Brunswick-Balke-Collender Company, is an American corporation that has been developing, manufacturing and marketing a wide variety of products since 1845. Today, Brunswick has more than 13,000 employees operating in 24 countries. Brunswick owns major boating brands, including Sea Ray, Boston Whaler, Bayliner, Mercury Marine, Attwood, Lund, Crestliner, Mastervolt, MotorGuide, Harris Pontoons, Freedom Boat Club, Princecraft, Heyday, Lowe, Uttern, Quicksilver and CZone, among many others. In 2021, Brunswick reported sales of US$5.8 billion. Brunswick's global headquarters is in the northern Chicago suburb of Mettawa, Illinois. On October 4, 2021, Brunswick Corporation announced that it has completed its acquisition of Navico, a global leader in marine electronics and sensors for $1.05 billion, adding to Brunswick the industry leading Navico brands of Lowrance, Simrad, B&G, and C-MAP.

GE Capital is the financial services division of General Electric.

Eastern Mountain Sports is an outdoor clothing and equipment retailer in the U.S. Northeast headquartered in Meriden, Connecticut.

Mountain Equipment Co-op is a Canadian co-op that started the MEC outdoor gear retail brand. The MEC brand name, assets and store leases were purchased by the American private investment firm Kingswood Capital Management's subsidiary Mountain Equipment Company in October 2020. 1077 Holdings Co-operative remains active to deal with the remaining claims by creditors and will be wound up at some point in the future.

Asics is a Japanese multinational corporation which produces sportswear. The name is an acronym for the Latin phrase anima sana in corpore sano. Products manufactured and marketed by Asics include footwear, clothing, and accessories.

Helly Hansen(HH) is a Norwegian manufacturer and retailer of clothing and sports equipment and a subsidiary of the Canadian retail chain Canadian Tire. Currently headquartered in Oslo, it was previously headquartered in Moss, Norway from its founding in 1877 until October 2009. 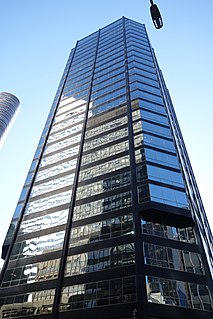 CVC Capital Partners is a Luxembourg-based private equity and investment advisory firm with approximately US$122 billion of assets under management and approximately €157 billion in secured commitments since inception across American, European and Asian private equity, secondaries and credit funds. As of 31 December 2021, the funds managed or advised by CVC are invested in more than 100 companies worldwide, employing over 450,000 people in numerous countries. CVC was founded in 1981 and, as of 31 March 2022, has over 650 employees working across its network of 25 offices throughout EMEA, Asia and the Americas.

Pentland Group is a British privately owned global company that owns and invests in, primarily, retail and wholesale businesses in the sports, outdoor and sports fashion sectors. The Group is the majority shareholder of JD Sports, which operates 2,420 stores across 19 territories. The Group owns Speedo, Berghaus, Canterbury of New Zealand, Endura, Boxfresh, Ellesse, Red or Dead, SeaVees and Mitre. It’s also the UK footwear licensee for Kickers and has a joint venture partnership for Lacoste footwear. The Group also holds interests directly and indirectly, through fund managers, in activities and businesses operating in sectors outside of its core trading activities, to provide the Group with an element of diversification. 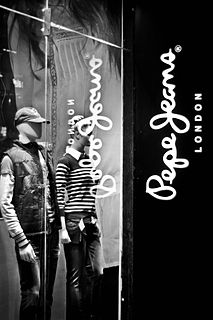 Pepe Jeans London is a denim and casual wear jeans brand established in the Portobello Road area of London in 1973, and now based in Sant Feliu de Llobregat, Spain.

Lafuma is a French company that specializes in outdoor equipment and clothing, such as backpacks, sleeping bags and footwear. It also offers a wide variety of other equipment, earning comparisons to United States companies such as Patagonia and Columbia Sportswear. Group brands include Eider, Millet and Oxbow. The Lafuma clothing brands have been personified by sports personalities and by the French actor and stuntman Karl E. Landler. 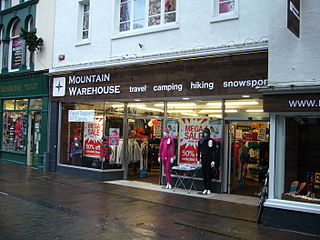 Life Fitness is an American fitness equipment company that specializes in the production and distribution of equipment such as stationary bikes and treadmills. They developed the industry's first electronic stationary bicycle. As of 2015, the company has over 1,700 employees and twelve manufacturing facilities around the world.