The 1980 Air Canada Silver Broom, the men's world curling championship, was held from March 24 to 29 at the Moncton Coliseum in Moncton, New Brunswick, Canada. 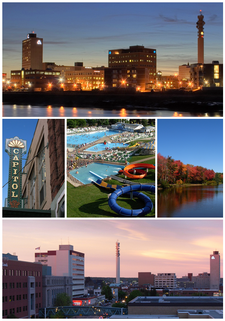 Moncton is one of three major urban centres in the Canadian province of New Brunswick, along with Saint John and the capital city of Fredericton. Situated in the Petitcodiac River Valley, Moncton lies at the geographic centre of the Maritime Provinces. The city has earned the nickname "Hub City" because of its central inland location in the region and its history as a railway and land transportation hub for the Maritimes.

The Moncton Coliseum is an Atlantic Canada's largest trade show facility with over 125,000 square feet of exhibition space and a drawing power of 1.4 million people within a 2.5 hour drive. The venue is located in Moncton, New Brunswick, Canada.

Liu Rui is a Chinese curler. He was the skip of the Chinese men's Olympic Curling Team at the 2014 Winter Olympics.

Jeff Isaacson is an American curler. He is a two-time Olympian, playing on the United States men's curling team at the 2010 and 2014 Winter Olympics.

Bo Jensen is an internationally elite curler from Denmark.

Zang Jialiang is a Chinese curler who trains in Harbin.

The New Brunswick Curling Association (NBCA) is the provincial governing body for the sport of curling in the province of New Brunswick, Canada. The NBCA was formed from the amalgamation of separate men's and women's associations in 1989.

Tsuyoshi Yamaguchi is a Japanese curler from Karuizawa, Nagano.

Ashley Howard is a Canadian curler from Regina, Saskatchewan. She played third on Team Saskatchewan in the 2016 Scotties Tournament of Hearts and is the executive director of CurlSask, the governing body of curling in Saskatchewan.

The Canadian U18 Curling Championships is an annual curling tournament held to determine the best juvenile-level curling team in Canada. Juvenile level curlers must be under the age of 18 as of June 30 in the year prior to the tournament.

The 2017 Canadian U18 Curling Championships were held from April 18 to 22 at the Superior Propane Centre and Curl Moncton in Moncton, New Brunswick.

The women's tournament of the 2017 Canadian U18 Curling Championships was held from April 18 to 22 at the Superior Propane Centre and Curl Moncton in Moncton, New Brunswick.

The Atlantic Superstore Monctonian Challenge is an annual bonspiel, or curling tournament, held at Curl Moncton in Moncton, New Brunswick. It has been a part of the Women's World Curling Tour since 2004 and part of the Men's tour since 2019. The tournament is held in a round robin format.