The South Atlantic League, often informally called the Sally League, is a Minor League Baseball league with teams predominantly in states along the Atlantic coast of the United States from New York to Georgia. A Class A league for most of its history, the league was promoted to High-A as part of Major League Baseball's 2021 reorganization of the minor leagues. The league temporarily operated for the 2021 season as the High-A East before reassuming its original moniker in 2022.

A number of different leagues known as the South Atlantic League (SAL) have existed since 1904. The most recent SAL adopted the moniker in 1980, having previously been the Western Carolinas League, founded in 1963. All of these have been nicknamed "Sally League".

There have been several South Atlantic Leagues in the history of minor league baseball, spanning from 1904 to the present with a few breaks. The league ran from 1904 to 1917 as a class C league, then started up again in 1919, also class C. This time it ran from 1919 to 1930, moving up to class B beginning in 1921. William G. Bramham became league president in mid-1924 and served until 1930. The league was restarted again as a class B from 1936 to 1942, shut down as a result of World War II, and returned in 1946 as a class A league. The AA Southern Association (which never integrated) died after the 1961 season and so the SAL was promoted to AA in 1963 to take its place; a year later the name was changed to the Southern League. Out of the 51 seasons of operation, Augusta, Georgia competed in 46, Macon, Georgia was around for 46, and Columbia, South Carolina was in 45. Charleston, South Carolina; Jacksonville, Florida; Savannah, Georgia; and Columbus, Georgia; each competed for at least 29 years also, making for a relatively stable lineup.

The South Atlantic League name went unused for 16 years, but in 1980 the Western Carolinas League brought back the name when it sought to change its identity. For nearly 60 years, 1948 through 2007, the dominant figure in the WCL/SAL was league founder and president John Henry Moss, who started the WCL as a young man in 1948, refounded it in 1960 and then led it into the new century. Moss retired at the close of the 2007 [1] South Atlantic League season. He died at age 90 on July 1, 2009, at Kings Mountain, North Carolina—a town where he had also been mayor for 23 years. [2]

The start of the 2020 season was postponed due to the COVID-19 pandemic before ultimately being cancelled on June 30. [3] [4]

As part of Major League Baseball's 2021 reorganization of the minor leagues, the South Atlantic League was promoted to High-A and temporarily renamed the "High-A East" for the 2021 season. [5] Following MLB's acquisition of the rights to the names of the historical minor leagues, the High-A East was renamed the South Atlantic League effective with the 2022 season. [6]

Notes: • An "^" indicates that team's article redirects to an article of an active team in a different league The South Atlantic League Hall of Fame was started in 1994. 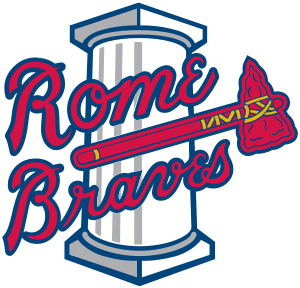 The Rome Braves are a Minor League Baseball team of the South Atlantic League and the High-A affiliate of the Atlanta Braves. They are located in Rome, Georgia, and play their home games at AdventHealth Stadium. From 2003 to 2020, the team served as Atlanta's Class A, or "Single-A," affiliate before being elevated to High-A with the restructuring of the minor league system in 2021. Rome is the longest-tenured partner club of the Atlanta Braves.

The Charleston Dirty Birds are an American professional baseball team based in Charleston, West Virginia. They are a member of the South Division of the Atlantic League of Professional Baseball, a partner league of Major League Baseball. The Dirty Birds have played their home games at Appalachian Power Park since 2005.

The Hagerstown Suns were a Minor League Baseball team based in Hagerstown, Maryland. They were a member of the South Atlantic League and, from 2007 through 2020, were the Class A affiliate of the Washington Nationals. They played their home games at Municipal Stadium which was opened in 1930 and seats 4,600 people. The team mascot was Woolie, a giant woolly bear caterpillar. 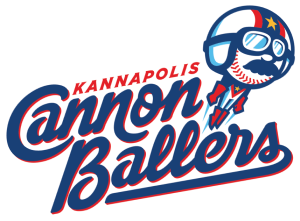 The Kannapolis Cannon Ballers are a Minor League Baseball team of the Carolina League and the Single-A affiliate of the Chicago White Sox. They are located in Kannapolis, North Carolina, and play their home games at Atrium Health Ballpark. The team was established in 1995 as the Piedmont Phillies. From 1996 to 2000, they were known as the Piedmont Boll Weevils. From 2001 to 2019, they were known as the Kannapolis Intimidators, after Kannapolis native NASCAR driver Dale Earnhardt, who was known as "The Intimidator," purchased a share of the team before the 2001 season.

The Charleston RiverDogs are a Minor League Baseball team of the Carolina League. They are located in Charleston, South Carolina, and are the Single-A affiliate of the Tampa Bay Rays. The RiverDogs' home stadium is Joseph P. Riley Jr. Park.

The Columbus Catfish were a minor league baseball team in Columbus, Georgia. They were a Class A team in the South Atlantic League, and were an affiliate of the Tampa Bay Rays for the 2007 and 2008 seasons. The Catfish relocated to Bowling Green, Kentucky for the 2009 season and are now known as the Bowling Green Hot Rods.

The Greensboro Grasshoppers are a Minor League Baseball team based in Greensboro, North Carolina. They are members of the South Atlantic League and are the High-A affiliate of the Pittsburgh Pirates. They play their home games at First National Bank Field, which opened in 2005 and seats 7,499 fans.

The Savannah Sand Gnats were a minor league baseball team based in Savannah, Georgia. They were a member of the A-level South Atlantic League. The Sand Gnats were an affiliate of the New York Mets in their final nine seasons. The team relocated to Columbia, South Carolina, in 2016 where they are now known as the Columbia Fireflies.

The Western Carolinas League was a Class D and a low Class A (1963–79) full-season league in American minor league baseball. The WCL changed its name prior to the 1980 season and has been known since as the South Atlantic League, a highly successful Class A circuit with teams up the Eastern Seaboard from Georgia to New Jersey. 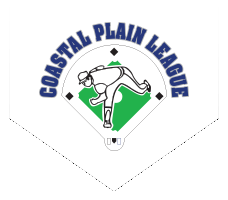 The Coastal Plain League (CPL) is a wood-bat collegiate summer baseball league, featuring college players recruited from throughout the nation. The league takes its name from the Class D level Coastal League which operated in the area from 1937 to 1952. 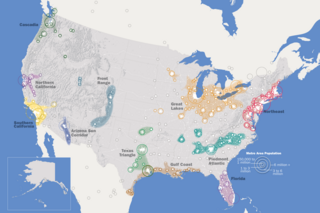 The Piedmont Atlantic Megaregion (PAM) is a neologism created by the Regional Plan Association for an area of the Southeastern United States that includes the Atlanta, Birmingham, Charlotte, Memphis, Nashville, Research Triangle (Raleigh-Durham), and Greensboro-Winston-Salem-High Point metropolitan areas. The megaregion generally follows the Interstate 85/20 corridor. According to Georgia Tech, PAM represents over 12 percent of the total United States population and covers over 243,000 square miles (630,000 km2) of land.

The Macon Peaches was the predominant name of the American minor league baseball franchise representing Macon, Georgia, during the 20th century.

The Southern League was a Class B and Class C minor league baseball league which operated intermittently in the Southern United States from 1885 to 1899. Financial problems plagued the league and its member teams throughout their existence. It was not unusual for teams to depart the league during the season or for the league to cease operations without completing the season. It was this lack of financial support which ultimately caused the league to permanently disband in 1889. In 1901, a new league, called the Southern Association, was created from its remnants.

The Gastonia Pirates were a minor league baseball team, based in Gastonia, North Carolina, between 1959 and 1972. The club was a Class-A affiliate of the Pittsburgh Pirates and played primarily in the Western Carolinas League. The club was originally named the Columbus Pirates prior to 1959 and were based in Columbus, Georgia, as a member of the South Atlantic League On July 6, 1959 the Pirates moved to Gastonia and became the Gastonia Pirates. In 1960 the Pirates were not an affiliate of the Gastonia team and the void was filled by the Gastonia Rippers in the Western Carolinas League.

The South Atlantic League, nicknamed the SALLY League, was a Minor League Baseball league that operated in the Southern United States intermittently from 1904 to 1963. Initially Class C league, it was elevated to Class B in 1921, Class A in 1946, and Double-A in 1963. The circuit was renamed the Southern League in 1964, and the league elected to maintain a new set of records from that season onward.

Wikimedia Commons has media related to South Atlantic League .
This page is based on this Wikipedia article
Text is available under the CC BY-SA 4.0 license; additional terms may apply.
Images, videos and audio are available under their respective licenses.