The league was founded in 1888 and ran through 1892. It was called the Texas Association in 1895, the Texas-Southern League in 1896 and again as the Texas League from 1897 to 1899. It was revived as a Class D league in 1902, moved to Class C in 1904 where it played through 1910 (except for 1906 as Class D again), played at Class B until 1920, and finally moved up to Class A in 1921. The Texas League, like many others, shut down during World War II. From 1959 to 1961, the Texas League and the Mexican League formed the Pan American Association. The two leagues played a limited interlocking schedule and post-season championship. By 1971, the Texas League and the Southern League had both decreased to seven teams. They played an interlocking schedule with the Southern League known as the Dixie Association. The two leagues played separate playoffs. The Texas League operated its own schedule from 1972 to 2020. The league ceased operations before the 2021 season in conjunction with Major League Baseball's reorganization of Minor League Baseball.

The Texas League's name is well known due to its association with a particular aspect of the game. A bloop single that drops between the infielders and outfielders has been called a Texas Leaguer since the 1890s, despite no evidence that it originated in the Texas League, or was any more common there than elsewhere. [1]

Near the end of its run, the Texas League witnessed a great deal of change. Teams once known as the Jackson Mets, El Paso Diablos, Shreveport Captains, and Wichita Wranglers all relocated to new cities and bigger stadiums.

In 2019, the San Antonio Missions relocated to Amarillo, Texas, becoming the Amarillo Sod Poodles. At the same time, the Triple-A Colorado Springs Sky Sox of the Pacific Coast League (PCL) moved to San Antonio to continue on as the Missions at the Triple-A level. [2]

The league ceased operations before the 2021 season in conjunction with Major League Baseball's reorganization of Minor League Baseball. [5] All eight of the Texas League's teams continued on in professional baseball as members of the Double-A Central. [6]

Note: • An "^" indicates that team's article redirects to an article of an active team in a different league

The Central Baseball League, formerly the Texas–Louisiana League, was a minor league whose member teams were independent of any Major League Baseball affiliations.

The Central Hockey League (CHL) was a North American mid-level minor professional ice hockey league which operated from 1992 until 2014. It was founded by Ray Miron and Bill Levins and later sold to Global Entertainment Corporation, which operated the league from 2000 to 2013, at which point it was purchased by the individual franchise owners. As of the end of its final season in 2014, three of the 30 National Hockey League teams had affiliations with the CHL: the Dallas Stars, Minnesota Wild, and Tampa Bay Lightning.

The San Antonio Missions are a Minor League Baseball team of the Double-A Central and the Double-A affiliate of the San Diego Padres. They are located in San Antonio, Texas, and are named for the Spanish missions around which the city was founded. The Missions play their home games at Nelson W. Wolff Municipal Stadium, which opened in 1994 and seats over 6,200 people with a total capacity of over 9,000.

The Texas Association of Private and Parochial Schools, or TAPPS, is an organization headquartered in the Lone Star Tower at Texas Motor Speedway Fort Worth, Texas. It was formerly headquartered at the Salado Civic Center in Salado, Texas.

The Houston Buffaloes, Houston Buffalos, or Buffs were an American minor league baseball team, and were the first minor league team to be affiliated with a Major League franchise, which was the St. Louis Cardinals. The club was founded in 1888, and played in the Texas League at various levels throughout the majority of its existence. Most recently, from 1959 through 1961, the team played in the Triple-A American Association as the top affiliate of the Chicago Cubs. The Buffaloes derived their nickname from Buffalo Bayou, the principal waterway through Houston to the Houston Ship Channel, outlet to the Gulf of Mexico. The team's last home was Buffalo Stadium, built in 1928. Before that, they played at West End Park from 1905–1928, and at Herald Park prior to that.

This is a list of media outlets in San Antonio, Texas.

The Big State League was a mid-level, Class B circuit in American minor league baseball that played for 11 seasons, from 1947 through 1957. Its member clubs were exclusively based in Texas. It saw much change in its 11-year lifetime, with no team serving as a member in every single season. Waco came the closest, serving from 1947–1956. The league was known as an offense-oriented circuit. 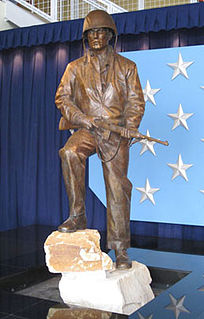 The Texas Medal of Honor Memorial is a statue commemorating recipients of the Medal of Honor from the state of Texas. Sculpted by Doyle Glass and Scott Boyer, it was dedicated on Memorial Day of 2008 in Midland, Texas at the Commemorative Air Force International Headquarters. In July 2018 the Memorial was assigned to the Ground Forces Detachment of the Commemorative Air Force and moved to Gainesville, Texas. It's currently on display at the North Central Texas College in the Library building and open to the public.

The South Texas League was a Class C level minor league baseball league from 1903 to 1906, with teams based in Louisiana and Texas. Comprising four teams for its first three years, it expanded to six teams in its final season.

The Texas Colored League was a minor league Negro baseball league organized in 1919 and lasted until 1926. The league did not play a schedule in 1922.