The Oklahoma City Indians was the primary name of an American professional baseball team representing Oklahoma City, Oklahoma, from 1904 though 1957, except for 1913 and three seasons during World War II. The team played in several different minor league baseball leagues, primarily the Texas League and the Western League. The team was known as the Mets, Boosters, and Senators at different times during its early years.

A team representing Oklahoma City first played in the Southwestern League in 1904. [4] The city was represented continuously in minor league baseball through 1957, except for four seasons. [4] Following the disbanding of the Oklahoma State League during the 1912 season, Oklahoma City did not have a professional team in 1913, although several Western League teams played exhibition games in the city. [5] During World War II, play was suspended for three seasons, 1943–1945, and resumed in 1946. [6]

Minor league classifications varied somewhat during the team's lifetime, but the Western and Texas leagues of the post-World War I era—rated Class A, A1 or Double-A—were high-level circuits that usually ranked two notches below Major League Baseball calibre.

The Indians won the 1935 Texas League championship and two years later captured 101 regular-season victories, but generally struggled in the Texas League standings. Additionally, they won the 1935 Dixie Series, a postseason interleague championship between the champions of the Southern Association and the Texas League. [8] In the club's last three seasons, 1955–1957, it lost 90, 106 and 88 games. The team spent the post-World War II period as the Double-A affiliate of the Cleveland Indians, but the Oklahoma City Indians' nickname long preceded that relationship. The Indians team spent many years as an unaffiliated franchise, and in its last two seasons was a farm club of the Boston Red Sox.

Baseball Hall of Fame player Rogers Hornsby managed the Indians for part of the 1940 season, and broadcaster Curt Gowdy launched his baseball announcing career with the postwar Indians; when he left in early 1949, Gowdy's replacement was Bob Murphy. [9] Both Gowdy and Murphy went on to win the Ford C. Frick Award from the Baseball Hall of Fame. Former minor league player and manager Jimmie Humphries, who owned the team during the 1950s, was with the Indians in different capacities from 1919 through 1957, "one of the longest careers with a single franchise in baseball history." [10]

The Oklahoma City Indians folded when the Texas League reorganized following the 1957 season. Five years later, the Oklahoma City 89ers, Triple-A affiliate of the Houston Colt .45s, then a major league expansion team (now known as the Houston Astros), debuted in the American Association. The Triple-A franchise has played continuously since 1962, and since 2015 has been the Oklahoma City Dodgers.

Players with Oklahoma City who also appeared in Major League Baseball (MLB) include:

The Nashville Sounds are a Minor League Baseball team of the Triple-A East and the Triple-A affiliate of the Milwaukee Brewers. They are located in Nashville, Tennessee, and are named for the city's association with the music industry. The team plays their home games at First Horizon Park, which opened in 2015 and is located on the site of the historic Sulphur Dell ballpark. The Sounds previously played at Herschel Greer Stadium from its opening in 1978 until the end of the 2014 season. They are the oldest active professional sports franchise in Nashville.

The Buffalo Bisons are a Minor League Baseball team and the Triple-A East affiliate of the Toronto Blue Jays. Located in Buffalo, New York, the team plays their home games at Sahlen Field, the highest-capacity Triple-A ballpark in the United States. The team is playing their 2021 season at Arm & Hammer Park in Trenton, New Jersey, as the Blue Jays are using Sahlen Field because of the COVID-19 pandemic.

The Oklahoma City Dodgers are a Minor League Baseball team in the Triple-A West and the Triple-A affiliate of the Los Angeles Dodgers. They are located in Oklahoma City, Oklahoma, and play their home games at Chickasaw Bricktown Ballpark which opened in 1998 in the city's Bricktown district.

Curtis Edward Gowdy was an American sportscaster. He called Boston Red Sox games on radio and TV for 15 years, and then covered many nationally televised sporting events, primarily for NBC Sports and ABC Sports in the 1960s and 1970s. He coined the nickname "The Granddaddy of Them All" for the Rose Bowl Game, taking the moniker from the Cheyenne Frontier Days in his native Wyoming.

The Houston Buffaloes, Houston Buffalos, or Buffs were an American minor league baseball team, and were the first minor league team to be affiliated with a Major League franchise, which was the St. Louis Cardinals. The club was founded in 1888, and played in the Texas League at various levels throughout the majority of its existence. Most recently, from 1959 through 1961, the team played in the Triple-A American Association as the top affiliate of the Chicago Cubs. The Buffaloes derived their nickname from Buffalo Bayou, the principal waterway through Houston to the Houston Ship Channel, outlet to the Gulf of Mexico. The team's last home was Buffalo Stadium, built in 1928. Before that, they played at West End Park from 1905–1928, and at Herald Park prior to that.

Ulysses Simpson Grant "Lil" Stoner, also known as Lil E. Stoner, was an American professional baseball player. A right-handed pitcher, he played professional baseball for 14 seasons from 1919 to 1933, including nine years in Major League Baseball with the Detroit Tigers, Pittsburgh Pirates (1930) and Philadelphia Phillies (1931). He appeared in 229 major league games and compiled a 50–57 win–loss record and a 4.76 earned run average (ERA).

The Southwestern League was the name of four former minor league baseball leagues that operated in the Southwestern United States. The second league, also known as the Oklahoma State League, was in operation for the 1904 season. The third league operated from 1921 to 1926. The fourth league, formerly the Longhorn League, operated from 1956 to 1957 before changing its name to the Sophomore League. 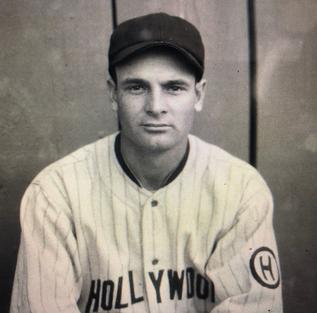 Gregory Peter Biagini was an American player, coach and manager in minor league baseball and a hitting coach for the Baltimore Orioles of Major League Baseball (MLB). During his playing career, he was listed at 6 feet 2 inches (1.88 m) and 220 pounds (100 kg), while batting left-handed and throwing right-handed.

Elija James Humphries was an American professional baseball player, manager and executive. He was a longtime figure in minor league baseball in Oklahoma City, Oklahoma.

The Triple-A Alliance was an interleague partnership between the American Association (AA) and International League (IL) Triple-A leagues of Minor League Baseball from 1988 to 1991. The two leagues played an interlocking schedule consisting of 40 to 44 interleague games per team. At the end of each season, an Alliance champion was determined in the Triple-A Classic, a best-of-seven postseason series.

The Ardmore Cardinals was a primary name of the minor league baseball teams based in Ardmore, Oklahoma, in various seasons between 1904 and 1961.

The Paris Orioles was the final and a primary name of the minor league baseball franchise based in Paris, Texas from 1955–1957. Paris hosted teams in various leagues between 1896–1957. The Paris Orioles played in the Sooner State League League (1955–1957) and were an affiliate of the Baltimore Orioles (1955–1957).

The Chickasha Chiefs was the final moniker of the minor league baseball teams based in Chickasha, Oklahoma between 1904 and 1952. Chickasha teams played as members of the Class D level Southwestern League (1904), Western Association (1920–1921), Oklahoma State League (1922) and Sooner State League (1948–1952).

The Bonham Boosters was the first moniker of the minor league baseball teams based in Bonham, Texas between 1898 and 1922. Bonham played as members of the Independent Southwestern League in 1898 and the Class D level Texas-Oklahoma League from 1911 to 1914 and 1921 to 1922. Bonham teams featured a different moniker each season.

Several different minor league baseball teams were based in Sherman, Texas, intermittently for a total of 14 seasons between 1895 and 1952. These teams won one championship, shared; that of the Texas Association in 1923.