The Birmingham Barons are a Minor League Baseball team based in Birmingham, Alabama. The team, which plays in the Double-A South, is the Double-A affiliate of the Chicago White Sox and plays at Regions Field in downtown Birmingham. The current edition of the Barons was previously located in Montgomery, Alabama, and known as the Montgomery Rebels. [1]

Most of the professional baseball teams that have played in Birmingham have used the name Barons. The current team began playing in Birmingham in 1981, having previously played in Montgomery, Alabama as the Montgomery Rebels. Like previous Barons teams, they played at Rickwood Field on a full-time basis from 1981 to 1987. Since then, they have only played at Rickwood on special occasions. From 1988 to 2012, the team played at Hoover Metropolitan Stadium in the suburb of Hoover, Alabama, where former basketball star Michael Jordan played with the team in 1994. Since 2013, the team plays at Regions Field in the downtown part of Birmingham.

All Birmingham Barons games are televised live on MiLB.TV. [3] All games are also broadcast on radio on either WJQX 100.5 FM, WJOX-FM 94.5 FM or WJOX-AM 690 AM. [4] Birmingham Barons Hall-of-Fame broadcaster Curt Bloom is the broadcast commentator for both WERC and MiLB.TV and has been the voice of the Barons since 1992. [5]

The Southern League was a Minor League Baseball league that operated in the Southern United States from 1964 to 2020. Along with the Eastern League and Texas League, it was one of three circuits playing at the Double-A level, which is two grades below Major League Baseball. Its headquarters were in the Atlanta suburb of Marietta, Georgia. The league was replaced by Double-A South.

The Jacksonville Jumbo Shrimp are a Minor League Baseball team of the Triple-A East and the Triple-A affiliate of the Miami Marlins. They are located in Jacksonville, Florida, and are named for shrimp caught in the area. The team plays their home games at 121 Financial Ballpark, which opened in 2003. They previously played at Sam W. Wolfson Baseball Park from 1962 until the end of the 2002 season.

The Mississippi Braves, or M-Braves as they are referred to locally, are a Minor League Baseball team based in Pearl, Mississippi, a suburb of Jackson. The team is the Double-A affiliate of the Atlanta Braves, and plays in the Double-A South. The team is owned and operated by Liberty Media, which also owns the Atlanta Braves. Liberty purchased the Braves from Time Warner's Turner Broadcasting unit in 2007.

The Chattanooga Lookouts are a Minor League Baseball team of the Double-A South and the Double-A affiliate of the Cincinnati Reds. They are located in Chattanooga, Tennessee, and are named for nearby Lookout Mountain. The team plays its home games at AT&T Field which opened in 2000 and seats 6,340 fans. They previously played at Engel Stadium from 1930 through 1999, with a one-year break in Montgomery, Alabama's Cramton Bowl in 1943.

The Tennessee Smokies are a Minor League Baseball team based in the Knoxville, Tennessee, metropolitan area. The team, which plays in the Double-A South, is the Double-A affiliate of the Chicago Cubs. Smokies Stadium, the team's ballpark, is located in the suburb of Kodak, and seats up to 8,000 fans. The team was based in Knoxville and called the Knoxville Smokies for many years before moving to Kodak and changing its name prior to the 2000 season. The team's nickname refers to the Great Smoky Mountains mountain range which permeates the region; mountains in the chain are often clouded in a hazy mist that may appear as smoke rising from the forest. 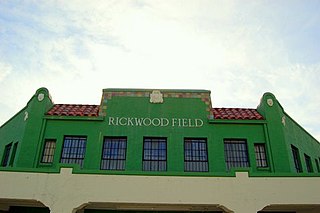 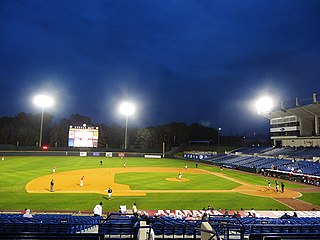 Hoover Metropolitan Stadium aka The Hoover Met is a former minor league baseball park located in the Birmingham, Alabama, USA, suburb of Hoover. It was home of the Birmingham Barons of the Southern League from 1988 to 2012, replacing historic Rickwood Field in Birmingham. The stadium also serves as the home for the SEC Baseball Tournament, as well as the primary home for Hoover High School football. It is located in the Birmingham-Hoover Metropolitan Area near Interstate 459 at Exit 10 just off Alabama State Route 150. The stadium is located three miles from the Riverchase Galleria, one of the south's largest shopping centers.

The Birmingham Black Barons played professional baseball in Birmingham, Alabama in the Negro leagues from 1920 to 1960. They alternated home stands with the Birmingham Barons in Birmingham's Rickwood Field, usually drawing larger crowds and equal press.

WJOX-FM is a radio station licensed to Birmingham. The station airs a sports radio format. WJOX is owned by Cumulus Media. The station was assigned the WJOX-FM call sign by the Federal Communications Commission on February 8, 2010. The station has studios in Homewood and its transmitter is in West Birmingham along the west ridge of Red Mountain.

WJOX is a commercial AM radio station licensed to Birmingham, Alabama. It is owned by Cumulus Media and broadcasts a sports radio format. WJOX is the Birmingham affiliate of the UAB Blazers Radio Network, the Tennessee Titans Radio Network and the Atlanta Braves Radio Network. It used to be the broadcast home of the Birmingham Barons. The station has studios and offices in Homewood. 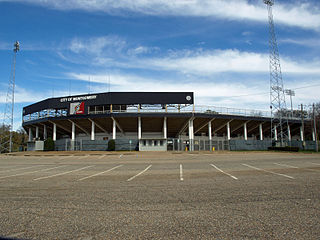 Paterson Field is a baseball stadium in Montgomery, Alabama. The stadium, named after William Burns Paterson junior, has a maximum capacity of 7,000 people and was opened in 1949. Paterson Field has played host to, among other professional teams, the Montgomery Rebels, a AA-class minor-league team affiliated with the Detroit Tigers, and the Montgomery Wings, an independent minor-league team. The stadium is still in use today, having recently been used as the home field of Alabama State University, a Division I program that competes in the Southwestern Athletic Conference. 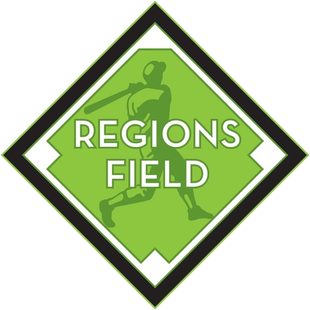 Regions Field is the name of a minor league baseball park in the Southside community of Birmingham, Alabama, U.S. It is the home field for the Birmingham Barons of the Double-A South, and replaced Hoover Metropolitan Stadium in the Birmingham suburb of Hoover as their home field. It also serves as the second home field along with Jerry D. Young Memorial Field for the UAB Blazers. Regions Field is located adjacent to the Railroad Park, just south of downtown Birmingham.

Charles James Parsons was a Major League Baseball pitcher for the Boston Beaneaters, New York Metropolitans and Cleveland Spiders. He also played for a number of minor league teams between 1884 and 1889. *May 29, 1885 he pitched the first no hitter game for the Birmingham Barons of Alabama in the Southern League.

The Montgomery Rebels was the name of several American minor league baseball franchises representing Montgomery, Alabama, playing in various leagues between 1912 and 1980. Rebels was the predominant nickname of the Montgomery teams, but it was not the original moniker, and it was one of several used by the city's 20th century professional baseball teams, which began play in organized baseball in 1903. Others included the Billikens, Bombers, Capitals, Climbers, Grays, Lambs, Lions and Senators.

Sports in Birmingham, Alabama include several minor league professional teams and college sports. The city of Birmingham and the Birmingham metro area have no major professional sport franchises. The Birmingham area is home to the Birmingham Barons, the AA minor league affiliate of the Chicago White Sox, which plays at Regions Field in the Southside adjacent to Railroad Park. The University of Alabama at Birmingham has a popular basketball program, and Samford University, located in Homewood, has basketball and football teams. The Hoover Metropolitan Stadium in the suburb of Hoover is home to the Southeastern Conference Baseball Tournament which drew more than 108,000 spectators in 2006. There is also an amateur soccer association, known as La Liga. The Birmingham area also hosts the Alabama Alliance basketball and Tragic City Rollers roller derby teams.

The Rocket City Trash Pandas are a Minor League Baseball team of the Double-A South expected to begin play in Madison, Alabama, in 2021. The team will be the Double-A affiliate of the Los Angeles Angels. They will play their home games at Toyota Field, which was planned to open in 2020.

The Southern League All-Star Game was an annual baseball game sanctioned by Minor League Baseball between professional players from the teams of the Double-A Southern League. Each division, North and South, fielded a team composed of players in their respective divisions as voted on by the managers, general managers, and broadcasters from each of the league's eight clubs.