The Tulsa Drillers are a minor league baseball team based in Tulsa, Oklahoma. The team, which plays in the Texas League, is the Double-A affiliate of the Los Angeles Dodgers major-league club.

The Drillers play at ONEOK Field (pronounced "one-oak"), in downtown Tulsa's Greenwood district. The team previously played at Drillers Stadium on the Tulsa County Fairgrounds at 15th and Yale in midtown Tulsa. The Drillers held their first home opener at ONEOK Field on April 8, 2010, losing 7–0 to the Corpus Christi Hooks in front of an over-capacity crowd of 8,665. [1] In their first season in the new ballpark, the Drillers drew total attendance of 408,183, the highest season figure in the history of Tulsa professional baseball. [2]

The Drillers came into being in 1977, when the two-year-old Lafayette Drillers were moved to Tulsa. Before that time, the Triple-A Tulsa Oilers had been the city's minor league club, but owner A. Ray Smith moved that team to New Orleans due to concerns over the dilapidated condition of Oiler Park. The new team opted to keep the Drillers name carried over from Lafayette—appropriate given the importance of oil to the Tulsa economy. Apart from World War II, professional baseball has been played in Tulsa continuously since 1932.

The Drillers set up shop at Oiler Park, which was renamed Driller Park. However, it was obvious that the old stadium was at the end of its useful life, and plans were already underway for a replacement. Tulsa County completed 8,000 seat Robert B. Sutton Stadium in 1981, naming it for its chief benefactor, a local oil executive. Sutton, however, was convicted in 1982 of fraud, and as a result the County renamed the park Tulsa County Stadium, and renamed it Drillers Stadium in 1989.

From 1977 to 2002, the Drillers were the Double-A affiliate of the Texas Rangers. In 2002, Rangers owner Tom Hicks purchased the Shreveport, Louisiana Texas League franchise with the intention of moving the team to Frisco, Texas, a suburban city north of Dallas, Texas. At the time, the Shreveport Swamp Dragons were affiliated with the San Francisco Giants; Hicks cast aside this association and bought out the remaining two years of Tulsa's Player Development Contract. The Drillers then signed a two-year agreement with the Colorado Rockies. After the 2014 season they signed an affiliation agreement with the Los Angeles Dodgers.

Batting coach Mike Coolbaugh was killed in a freak accident on July 22, 2007. While standing in the first base coach box, he was hit in the head by a line drive. [3] Although CPR was administered at the scene, he died less than an hour later. The Drillers and Travelers suspended their game, which the Travelers had been leading, 7–3, in the ninth inning. The Drillers also postponed their game the following night. [4] The coroner concluded that Coolbaugh was actually hit in the neck with the line drive instead of the head, which ruptured an artery in his neck, killing him. [5] As a result of this event, Major League Baseball began making helmets for base coaches mandatory in 2008. [6]

Tulsa businessman Bill Rollings acquired the Lafayette franchise and moved it to Tulsa in 1977. [7] [8] Country music entertainer Roy Clark was a co-owner of the team for six years. [9] Went Hubbard bought the team in 1986. In March 2006, Chuck Lamson (a former Drillers pitcher and executive) bought out much of Hubbard's stock in the team; Lamson became president and majority owner of the team. [10] In December 2010, Lamson sold his stock back to Hubbard. This transaction made Hubbard the sole owner of the team; his sons, Dale and Jeff, became co-chairmen. Went and Dale Hubbard are residents of Walpole, New Hampshire; Jeff Hubbard, a former player (in 1987) and coach (in 1991) for the Drillers, lives in Durham, North Carolina. [11] Went Hubbard died in September 2012. [12]

For 13 years the Tulsa Drillers' radio (and sometime television) announcer was Mark Neely, but in January 2009 it was announced that Neely had been hired to be the new TV play-by-play announcer for the San Diego Padres. [14] In February the Drillers announced that Neely's replacement would be Dennis Higgins, former announcer for the Wichita Wranglers. [15] Since the 2005 season, the Drillers have been broadcast on KTBZ (AM), Sports Radio 1430, "The Buzz" in Tulsa. [16]

The Ottawa Lynx were a Minor League Baseball team that competed in the Triple-A International League (IL) from 1993 to 2007. The team's home field was Lynx Stadium in Ottawa, Ontario. Over 15 seasons, the team was an affiliate of the Montreal Expos (1993–2002), Baltimore Orioles (2003–2006), and Philadelphia Phillies (2007). At the time, it was the only IL franchise in Canada. 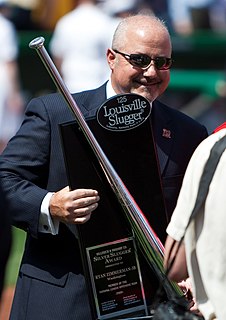 The Silver Slugger Award is awarded annually to the best offensive player at each position in both the American League and the National League, as determined by the coaches and managers of Major League Baseball. These voters consider several offensive categories in selecting the winners, including batting average, slugging percentage, and on-base percentage, in addition to "coaches' and managers' general impressions of a player's overall offensive value". Managers and coaches are not permitted to vote for players on their own team. The Silver Slugger was first awarded in 1980 and is given by Hillerich & Bradsby, the manufacturer of Louisville Slugger bats. The award is a bat-shaped trophy, 3 feet (91 cm) tall, engraved with the names of each of the winners from the league and plated with sterling silver.

The Frisco RoughRiders are a Minor League Baseball team of the Texas League and the Double-A affiliate of the Texas Rangers. They are located in Frisco, Texas, and are named for the 1st U.S. Volunteer Cavalry Regiment during the Spanish–American War, headed by future American President Theodore Roosevelt, nicknamed "The Rough Riders" by the American press. They play their home games at Dr Pepper Ballpark, which opened in 2003 and seats 10,316 people.

The Round Rock Express are a Minor League Baseball team of Pacific Coast League (PCL) and the Triple-A affiliate of the Houston Astros major league club. They are located in Round Rock, Texas, and play their home games at the Dell Diamond. The team is named for Baseball Hall of Famer Nolan Ryan, who was nicknamed "The Ryan Express." Ryan, along with son Reid Ryan and Don Sanders make up the team's ownership group, Ryan Sanders Baseball.

The Myrtle Beach Pelicans are a Minor League Baseball team in Myrtle Beach, South Carolina, and the Class A-Advanced affiliate of the Chicago Cubs. The Pelicans are members of the Carolina League and most recently won the league's championship in 2016. Home games are played at TicketReturn.com Field, which opened in 1999 and seats up to 6,599 fans. From their inaugural season through 2010, the Pelicans were affiliated with the Atlanta Braves, before spending four seasons as a Texas Rangers affiliate from 2011 to 2014. The team's affiliation with the Chicago Cubs began in 2015 and is currently in place through 2022.

The Greensboro Grasshoppers are a Minor League Baseball team based in Greensboro, North Carolina. They are members of the South Atlantic League and the Class A affiliate of the Pittsburgh Pirates. They play their home games at First National Bank Field, which opened in 2005 and seats 7,499 fans.

The Salem-Keizer Volcanoes are a minor league baseball team in Keizer, Oregon, United States. They are a Short-Season Class A team in the Northwest League, and have been an affiliate of the San Francisco Giants since the Volcanoes' inception in 1997. They play their home games at Volcanoes Stadium, which opened in 1997 and seats 4,252 fans.

Drillers Stadium was a former minor league baseball stadium located in Tulsa, Oklahoma. From 1981 to 2009, Drillers Stadium was home to the Tulsa Drillers, of the Double-A Texas League. For a number of years Drillers Stadium also hosted one of the regular season baseball games played between Oklahoma State University and the University of Oklahoma in the Bedlam Series. Drillers Stadium is located on the southwest corner of Yale Avenue and 15th Street, in the Tulsa State Fairgrounds complex that also includes Expo Square Pavilion, the QuikTrip Center and Golden Driller, a racetrack, a waterpark, and the sites of the former Bell's Amusement Park and of Oiler Park, where Tulsa's professional baseball teams had played since 1934.

The Oregon State Beavers baseball team represents Oregon State University in NCAA Division I college baseball. The team participates in the Pac-12 Conference. They are currently coached by Mitch Canham and assistant coaches Pat Bailey and Rich Dorman. They play home games in Goss Stadium at Coleman Field. The Beavers won the 2006 and 2007 College World Series to become only the fifth team in history to win back-to-back national championships, and the first since the super regional format has been implemented. In 2018, the program won its third national title. In addition, the program has won 26 conference championships, qualified for 20 NCAA tournaments, and appeared in seven College World Series.

Michael Robert Coolbaugh was an American baseball player and coach. Born in Binghamton, New York, he was the brother of major leaguer Scott Coolbaugh. Michael Coolbaugh was a 1990 graduate of Theodore Roosevelt High School, San Antonio, Texas. Coolbaugh died after being hit by a line drive while working as a first-base coach in a minor league game.

Dickey–Stephens Park is a baseball park in North Little Rock, Arkansas, USA. The ballpark is primarily used for baseball and serves as the home for the Arkansas Travelers of the Texas League. The capacity of the ballpark is 7,200 which includes 5,800 fixed seats capacity for 1,500 on the berms. It opened in 2007 as a replacement for Ray Winder Field in Little Rock, Arkansas. The ballpark is named after four local Arkansas brothers: Baseball Hall of Famer Bill Dickey, former Major League Baseball catcher George Dickey, and businessmen Jackson T. Stephens and W. R. Stephens.

The Tulsa Oilers, located in Tulsa, Oklahoma, were a minor league baseball team that existed on-and-off in multiple leagues from 1905 to 1976. For most of their history, they played at Oiler Park, which opened on July 11, 1934, and was located on the Tulsa County Fairgrounds at 15th Street and Sandusky Avenue. 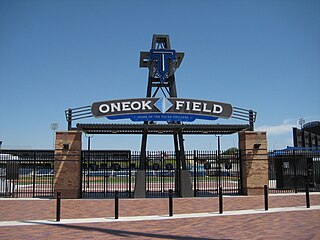 ONEOK Field is a baseball park in Tulsa, Oklahoma. Located in the historic Greenwood district adjacent to downtown Tulsa, it is the home of the Tulsa Drillers of the AA Texas League. The stadium is named for ONEOK, a natural gas utility.

Ronnie Dwayne Gideon is an American professional baseball coach. He is the first base coach for the Colorado Rockies of Major League Baseball (MLB).

Oiler Park was a stadium located in Tulsa, Oklahoma. Located on the Tulsa County Fairgrounds, it was primarily used for baseball and was the home of the Tulsa Oilers until that team was moved to New Orleans and replaced by the Tulsa Drillers after the 1976 season. The ballpark had a capacity of 4,000 people when opened in 1934, and increased to 7,200 in 1948.

The Tulsa Golden Hurricane baseball team represented the University of Tulsa and competed in the Missouri Valley Conference of NCAA Division I. Tulsa dropped their baseball program in 1980.

The Yakima Bears were a minor league baseball team in the northwest United States, located in Yakima, Washington. They were in the short-season Class A Northwest League and had been a farm team of the Arizona Diamondbacks from 2001 until moving to Hillsboro, Oregon after the 2012 season and becoming the Hillsboro Hops. The Bears were previously affiliated with the Los Angeles Dodgers from the team's creation in 1990 when the Salem Dodgers were moved to Yakima. The Bears played their home games at Yakima County Stadium, which opened in 1993 and succeeded Parker Field.

FC Tulsa is an American professional soccer team based in Tulsa, Oklahoma which competes in the USL Championship, the second tier of the American soccer pyramid.

The Lafayette Drillers baseball club was an American minor league baseball franchise representing Lafayette, Louisiana, that played for two seasons, 1975–76, in the Double-A Texas League as an affiliate of the San Francisco Giants. The team played its home games at Clark Field.