The Tulsa Oilers are a professional ice hockey team based in Tulsa, Oklahoma, and play in the ECHL. The Oilers played their home games at the Tulsa Convention Center until 2008 when they moved into the new BOK Center. For many years, the Tulsa Oilers name was shared with Tulsa's former minor-league baseball team that pre-dated the Tulsa Drillers. To reduce confusion in local news reporting, the hockey team was often called the "Ice Oilers".

Formerly a member of the Central Hockey League, the Oilers are one of only two teams which played every one of the CHL's 22 seasons (the other being the Wichita Thunder). [1] The Oilers established a winning tradition, making the playoffs in 9 of their first 13 seasons. However, their performance in recent years has been less successful making the playoffs four times since 2005. [2]

On June 23, 2013, Lund sold the team to the owners of the Wichita Thunder, the Steven brothers.

Tulsa has previously had several other hockey teams named the "Oilers."

The original Oilers joined the five team American Hockey Association as an expansion team in 1928. Their first home game was January 1, 1929, against the Duluth Hornets, as part of the grand opening of the Tulsa Coliseum. The team won the AHA championship that season, and again in the 1930–31 season. For the 1932–33 season, the Oilers moved to St. Paul, Minnesota, and became the St. Paul Greyhounds, but halfway through the season they moved back to Tulsa once again becoming the Tulsa Oilers. At the end of the 1941–42 season, the AHA and the Oilers disbanded due to World War II. Hockey Hall of Fame members Duke Keats and Bill Cowley played for short periods on the Tulsa Oilers during this period.

The AHA was reorganized as the United States Hockey League for the 1945–46 season as a seven team league, once again including the Oilers. That league folded after the 1950–51 season. The team played at Avey's Coliseum during this time. Hockey Hall of Fame member Clint Smith played the 1947–48 season with the Tulsa Oilers after a stellar 11-year career in the NHL with the New York Rangers and Chicago Black Hawks and won the USHL Most Valuable Player Award.

In 1964, a new Tulsa Oilers team joined the Central Professional Hockey League (later shortened to Central Hockey League) in its second season of operation. The Oilers won the Adams Cup as the CPHL/CHL champions in 1968, 1976, and 1984.The Oilers played in the CHL until 1984 when the league folded.

A new Central Hockey League was created in 1992 as a centrally owned league, owned by Ray Miron and Bill Levins. The league was operated by Ray and Monte Miron and funded by Chicago businessman and minor league sports entrepreneur Horn Chen. With the creation of the new CHL the Tulsa Oilers were a team once again. Ray Miron once coached the Oilers in the old CHL and his son Monte had played for the Oilers in 1973–74. Tulsa claimed the CHL championship in the CHL's inaugural season under general manager Jeff Lund and head coach Garry Unger. [4]

The Oilers established a winning tradition, making the playoffs in nine of their first 13 seasons. However, with a decline in their performance and not qualifying for the playoffs since 2005 nor winning a playoff series since 1994, Lund hired former player Taylor Hall as the Oilers' general manager on May 3, 2008. [5] After finishing third to last in the CHL with 18 wins in 64 games in the 2008–09 season, Hall hired head coach Bruce Ramsay, fresh off a trip to the IHL's Turner Cup finals with the Muskegon Fury, on May 21, 2009. [6]

In Ramsay's first season as coach in 2009–10 season, the Oilers rebounded with 28 wins in 64 games to post the second highest point total increase in the CHL from the previous season. [7] On September 2, 2010, the Oilers announced their first National Hockey League affiliation since their reformation in 1992 with the Colorado Avalanche, joining the Lake Erie Monsters of the AHL. [8]

On October 7, 2014, soon before the 2014–15 Central Hockey League season was set to begin, it was announced that the league had ceased operations and the Oilers, along with the Allen Americans, Brampton Beast, Quad City Mallards, Missouri Mavericks, Rapid City Rush and Wichita Thunder, were all approved the expansion membership application into the ECHL for the 2014–15 season. [9] [10]

The ECHL is a mid-level professional ice hockey league based in Princeton, New Jersey, with teams scattered across the United States and two franchises in Canada. It is a tier below the American Hockey League.

The Central Hockey League (CHL) was a North American mid-level minor professional ice hockey league which operated from 1992 until 2014. Until 2013, it was owned by Global Entertainment Corporation, at which point it was purchased by the individual franchise owners. As of the end of its final season in 2014, three of the 30 National Hockey League teams had affiliations with the CHL: the Dallas Stars, Minnesota Wild, and Tampa Bay Lightning.

The Wichita Thunder are a minor league hockey team based in Wichita, Kansas. The team played in the Central Hockey League from 1992 until 2014, and then in the ECHL since the 2014–15 season. From 1992 until December 2009 the Thunder played in the Britt Brown Arena located in the northern Wichita suburb of Park City. In January 2010, the team began playing its home games at the newly built Intrust Bank Arena.

The San Antonio Rampage are an ice hockey team in the American Hockey League based in San Antonio, Texas. They are currently the top affiliate of the St. Louis Blues of the National Hockey League (NHL). The Rampage were owned by Spurs Sports & Entertainment before they agreed to sell the franchise to the Vegas Golden Knights in February 2020 and will relocate the franchise to the Las Vegas Valley area at the conclusion of the 2019–20 AHL season and become the club's top affiliate. 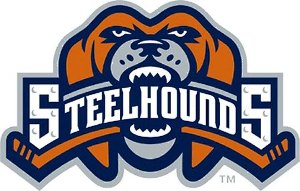 The Youngstown SteelHounds was a professional ice hockey team which participated in the Central Hockey League (CHL) from the 2005–2006 season through the 2007–2008 season. The team was affiliated with the Columbus Blue Jackets of the NHL and the Syracuse Crunch of the AHL. The team played its home games at the Covelli Centre in Youngstown, Ohio.

The Stockton Thunder was a minor league professional ice hockey team that was based in Stockton, California and a member of the ECHL. The Stockton Arena was their home ice, with a capacity of 9,737. The team was an affiliate team of the New York Islanders of the National Hockey League in their final two seasons. The team was purchased by the Calgary Flames and relocated to Glens Falls, New York as the Flames relocated their American Hockey League team to Stockton to become the Stockton Heat.

Michael Walter "Wally" Blaisdell is a Canadian retired professional ice hockey right winger who played in the National Hockey League (NHL) and later in the British Hockey League (BHL). He was the first round draft pick in the 1980 NHL Entry Draft of the Detroit Red Wings. Blaisdell most recently was the head coach of the 2003–04 British Elite Ice Hockey League Champions, the Sheffield Steelers.

Taylor Hall is a Canadian retired professional ice hockey player who spent parts of five seasons in the National Hockey League with the Vancouver Canucks and Boston Bruins. Hall played 41 games across five seasons in the NHL, with the rest of his career coming in the minor leagues and in Europe. After retiring in 1996 he took up coaching and later became general manager for several clubs, with his longest tenure coming with the Tulsa Oilers of the Central Hockey League and later ECHL, from 2008 until 2019.

Stephen Paul Martinson is an American former professional ice hockey player and current coach of the Allen Americans in the ECHL.

The Rapid City Rush are a professional ice hockey team in the ECHL based in Rapid City, South Dakota, and play their home games at the Rushmore Plaza Civic Center. 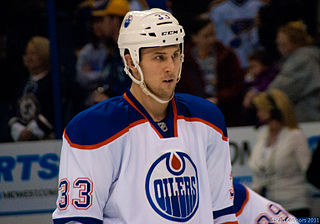 Colten Teubert is a Canadian-German former professional ice hockey defenceman and current head coach of the Bellingham Blazers of the Western States Hockey League (WSHL). He most notably played for the Edmonton Oilers in the National Hockey League (NHL) before moving to Europe in playing for the Iserlohn Roosters and the Thomas Sabo Ice Tigers of the Deutsche Eishockey Liga (DEL). He was drafted by the Los Angeles Kings in the first round, 13th overall, in the 2008 NHL Entry Draft. Prior to turning professional, he played in the Western Hockey League (WHL) with the Regina Pats, who drafted him first overall in the 2005 WHL Bantam Draft.

The Kansas City Mavericks are an ice hockey team in the ECHL. Founded in 2009 as the Missouri Mavericks, the team plays in Independence, Missouri, a suburb of Kansas City, Missouri, at the Cable Dahmer Arena.

The Allen Americans are an ice hockey team headquartered at the Allen Event Center in Allen, Texas, which currently plays in the ECHL. The team was founded in 2009 in the Central Hockey League (CHL) where they played for five seasons, winning the Ray Miron President's Cup twice. The CHL folded in 2014 and the ECHL accepted the remaining CHL teams as members for the 2014–15 season. In their first two seasons in the ECHL, Allen advanced to the Kelly Cup finals, winning the championship in both years.

The Denver Cutthroats were a minor league ice hockey team, as a member of the Central Hockey League, that began play in the 2012–13 season. They served as a farm team of the National Hockey League's Colorado Avalanche and the American Hockey League's Lake Erie Monsters. Based in Denver, Colorado, the Cutthroats played their home games at the Denver Coliseum. On August 20, 2014, after only two seasons in the CHL, the Cutthroats announced they would go dormant for the 2014–15 season, with hopes to gain additional investors for 2015–16.

The Norfolk Admirals are a professional ice hockey team in the ECHL which began play in the 2015–16 season. Based in Norfolk, Virginia, the team plays its home games at the Norfolk Scope.

The 2015–16 ECHL season was the 28th season of the ECHL. The regular season schedule ran from October 16, 2015 to April 9, 2016 with the Kelly Cup playoffs to follow. Twenty-eight teams in 21 states and one Canadian province will each play a 72-game schedule. The league alignment was significantly altered before the season when the American Hockey League announced the formation of a Pacific Division on January 30, 2015 displacing the ECHL teams that had been in California markets.