The arena was designed by Italian architect/engineer Pier Luigi Nervi in conjunction with the (now defunct) local firm Williams and Tazewell, which designed the entire complex. Nervi's design for the arena's reinforced concrete dome derived from the PalaLottomatica and the much smaller Palazzetto dello Sport, which were built in the 1950s for the 1960 Summer Olympics in Rome.

Construction on Scope began in June 1968 at the northern perimeter of Norfolk's downtown and was completed in 1971 at a cost of $35 million. Federal funds covered $23 million of the cost, and when it opened formally on November 12, 1971, the structure was the second-largest public complex in Virginia, behind only the Pentagon. [5]

The name "Scope", a contraction of kaleidoscope, [7] emphasizes the venue's re-configurability. The facility logo (right), which features a multi-colored, abstracted kaleidoscope image, was designed by Raymond Loewy's firm Loewy/Snaith of New York. [7] [8]

After watching the 1960 Rome Summer Olympics on television, and seeing the Palazzo dello Sport and Palazzetto dello Sport, Brad Tazewell and Jim Williams, two Norfolk architects, solicited Senator A. Willis Robertson, father of Pat Robertson, to build a sports complex in Norfolk. Subsequently, President Lyndon B. Johnson asked Robertson to support federal funding for a multimillion-dollar cultural center in Colorado, and Robertson said he would if Johnson would support one in Norfolk. [5] Williams and Tazewell was subsequently commissioned; they in turn commissioned Nervi.

The complex was an important part of the first phase of Norfolk's post-World War II revitalization. A large section of the city's downtown was razed, and the Scope complex was to "anchor" its northern corner, with the Vincent Kling designed courthouse and civic complex anchoring the eastern edge of downtown.

The arena is located on its 14-acre (5.7 ha) site above a raised plinth, below which is located a parking garage for 640 cars. The facility includes a 65,000 sq ft (6,000 m2) exhibit hall as well as the adjacent Chrysler Hall, a music and theater venue, home to the Virginia Symphony Orchestra. The arena's seating can be reconfigured to accommodate from 10,253 for sporting events up to 13,800 for concerts.

With a concrete monolithic dome measuring 440 feet (130 m) in diameter and a height of 110 feet (34 m), the dome was, at the time of its construction, the largest of its kind in the world — and was displaced as the record holder after the construction of the Seattle Kingdome. After the demolition of the larger Kingdome in 2000, Scope reclaimed the title as having the world's largest reinforced thin-shell concrete dome. Supported by 24 flying buttresses, the arena roof encloses 85,000 sq ft (7,900 m2). With over 1,000 pilings, the facility was constructed 10 feet (3.0 m) below the city's water table. The roof is a ribbed concrete dome, independent of seating bowl formed of sloped concrete beams supporting precast treads and risers which form the seating bowl. The perimeter of the dome roof is supported by a combination of vertical columns and inclined buttresses, which tie into a tension ring below ground. A concentric ring, approximately 7' 9" wide, is suspended from the dome, for service and lighting needs.

During preparations for the first hosting of the Ringling Bros. and Barnum & Bailey Circus, a bear escaped its cage and ran across the wet paint on the floor of the unfinished Exhibition Hall below. During the first presentation in the Exhibition Hall of the Hampton Roads Automobile Show, visitors could spot bear tracks in the painted floor, between the exhibitions. (Source: The Virginian-Pilot )

The arena has undergone $11 million of renovations since 2003, including the replacement of a center-hung scoreboard with a matrix screen on each side with a center-hung scoreboard with LED video and matrix boards and two LED end-zone videoboards in 2008. A new glass wall has been installed, and is expected to be extended in order to expand the arena's main concourse at a cost of $3.5 million in 2014. This would result in additional restrooms and concession stands at the arena.

There has been discussion about expanding the Norfolk Scope, by adding 5,000 seats and 24 luxury suites, in the near future, in order to remain competitive with neighboring venues in the southeastern and mid-Atlantic states. [9] In 2018, the city decided to move on from the renovation concept, which would total $200 million. In his 2019 State of the City address, Norfolk mayor Kenny Alexander announced plans to study the possibility of building a new arena, in a not yet named location.

National Wrestling Alliance, Jim Crockett Promotions, World Championship Wrestling, World Wrestling Entertainment had wrestling shows in Scope many times from the 1960s on, many times as a pay-per-view event. The biggest was Starrcade 88 in December 1988. The venue also hosted WCW's Starrcade 1991 PPV & World War III PPV in November 1996, featuring the 3 ringed battle royal. During the Monday Night Wars, professional wrestling stable D-Generation X drove a jeep up to the doors of the venue during an episode of WCW Monday Nitro. 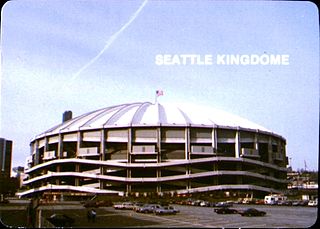 The Kingdome was a multi-purpose stadium in Seattle's SoDo neighborhood. Owned and operated by King County, the Kingdome opened in 1976 and was best known as the home stadium of the Seattle Seahawks of the National Football League (NFL), the Seattle Mariners of Major League Baseball (MLB), and the Seattle SuperSonics of the National Basketball Association (NBA). The stadium also served as both the home outdoor and indoor venue for the Seattle Sounders of the North American Soccer League (NASL) and hosted numerous amateur sporting events, concerts, and other events. The Kingdome measured 660 feet (200 m) wide from its inside walls. 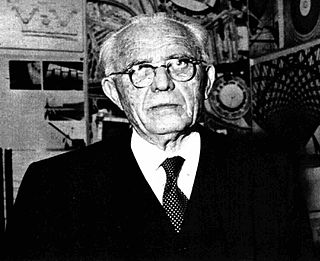 The Greensboro Coliseum Complex (GCC) is an entertainment and sports complex located in Greensboro, North Carolina. Opened in 1959, the arena was once one of the largest venues in the South, with a seating capacity of over 23,500. The complex holds eight venues that includes an amphitheater, arena, aquatic center, banquet hall, convention center, museum, theatre, and an indoor pavilion. It is the home of the UNC Greensboro Spartans men's basketball team, the Greensboro Swarm of the NBA G League, the Carolina Cobras of the National Arena League, as well as the Atlantic Coast Conference (ACC) with their Men's and Women's Basketball Tournaments.

Omni Coliseum was an indoor arena in Atlanta, Georgia, United States. Completed in 1972, the arena seated 16,378 for basketball and 15,278 for hockey. It was part of the Omni Complex, now known as the CNN Center.

A concrete shell, also commonly called thin shell concrete structure, is a structure composed of a relatively thin shell of concrete, usually with no interior columns or exterior buttresses. The shells are most commonly flat plates and domes, but may also take the form of ellipsoids or cylindrical sections, or some combination thereof. The first concrete shell dates back to the 2nd century. 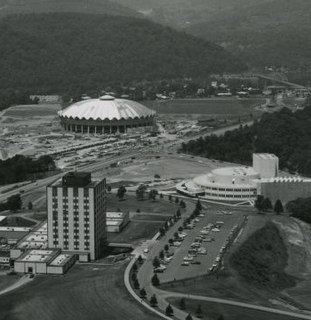 The WVU Coliseum is a 14,000-seat multi-purpose arena located on the Evansdale campus of West Virginia University in Morgantown, West Virginia. The circular arena features a poured concrete roof. It was built with state funds and replaced the WVU Fieldhouse, which seated 6,000.

The Cam Henderson Center is the primary indoor athletics complex at Marshall University in Huntington, West Virginia, USA. The basketball and volleyball teams of the Marshall Thundering Herd use the venue for their home games. The first basketball game played in the facility was a varsity match between Marshall and Army on November 27, 1981. The venue is named for Cam Henderson, who coached football and basketball at the school from 1935 to 1955. PalaLottomatica, formerly known as Palazzo dello Sport or PalaEUR, is a multi-purpose sports and entertainment arena in Rome, Italy. It is located in the heart of the well known modern EUR complex. The arena hosted the 1960 Olympic basketball tournaments.

The Palazzetto dello Sport, also less commonly known as the PalaTiziano or PalaFlaminio, is an indoor arena that is located in Piazza Apollodoro, in Rome, Italy. It has a 3,500 seating capacity for basketball games. 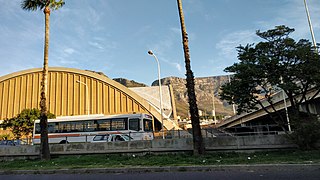 The Good Hope Centre in Cape Town, South Africa (1976) by Pier Luigi Nervi, is an exhibition hall and conference centre, with the exhibition hall comprising an arch with tie-beam on each of the four vertical facades and two diagonal arches supporting two intersecting barrel-like roofs which in turn were constructed from pre-cast concrete triangular coffers with in-situ concrete beams on the edges.

Chrysler Hall is the premier performing arts venue in Norfolk, Virginia, located in the downtown section of the city. Built in 1972 and located next to the Norfolk Scope arena, the venue is home to the Virginia Symphony Orchestra, the Virginia Ballet and hosts Broadway plays while serving as Norfolk's primary theater and concert venue. The venue also contains a studio theater in the lower levels of the complex that serves as the current home of the Generic Theater. The City of Norfolk owns and operates the venue.

The KJC King Dome is a multipurpose indoor arena currently under construction in Davao City, Philippines.

Norfolk Municipal Auditorium was a 5,200 seat multi-purpose arena and music venue in Norfolk, Virginia, USA that opened in May 1943. The arena was constructed after the City of Norfolk and the military found a need to construct an entertainment venue in the city after the population of the city doubled between 1938 and 1941 as a result of World War II-related military buildup.

The Allianz Cloud previously known as Palazzetto Lido Sport, commonly known as PalaLido, is a multi-purpose indoor arena that is located in Milan, Lombardy, Italy. The arena's primary use is to host basketball and volleyball games, but it can also be used to host handball, tennis, gymnastics, and wrestling. The arena currently has a seating capacity of 5,420 for sports events. It will host ice sledge hockey in the 2026 Winter Paralympics.