Hoover is a city in Jefferson and Shelby counties in north central Alabama, United States. The largest suburb of Birmingham, the city had a population of 85,768 as of the 2019 US Census estimate. [6] Hoover is part of the Birmingham-Hoover, AL Metropolitan Statistical Area and is also included in the Birmingham-Hoover-Talladega, AL Combined Statistical Area. Hoover's territory is along the foothills of the Appalachian Mountains.

The Birmingham Barons Minor League Baseball team, which traces its history to 1885, played its home games at the 10,800-seat Hoover Metropolitan Stadium until 2013, when it moved to Regions Field in the Parkside District of Birmingham.

This suburban area near the foothills of the Appalachian Mountains had been known as the Green Valley community since the 1930s; it was mostly a bedroom or residential community into the late 1970s and early 1980s. The City of Hoover was incorporated in 1967, named for William H. Hoover (1890 - 1979), a local insurance company owner. [7]

On September 8, 1980, the city annexed the Riverchase business and residential community, [8] gaining large office buildings, employers, and workers to increase the city's tax base. When Interstate I-459 was opened, a major interchange with Interstate I-65 was constructed within the borders of Hoover, improving access.

In 1986 the Riverchase Galleria multi-use complex opened; it has significantly increased the tax revenue for the city. It has also attracted new residents and businesses to the area. The city has grown extremely fast, aided by its annexations of territory as well as new developments. The city has expanded its facilities, and now operates a Municipal Center, Library, and Public Safety Center. The city expects to continue to increase in population, which has risen significantly since 2008. It numbered 81,619 as of the 2010 Census.

The municipal government has operated under the Mayor-Council form of government since incorporation. The Mayor and City Council are elected on a non-partisan basis to concurrent four-year terms of office, which begin on October 1 of election year. Policy-making and legislative authority is vested in the City Council, which consists of seven "at-large" elected members (prior to 2004, the council consisted of five at-large members.) (Candidates for at-large elections must gain a majority of voters; such a system has been found in other cities in Alabama to limit the ability of minority voters to elect candidates of their choice.)

The Riverchase Galleria shopping-hotel-office complex generates tax revenues for the city; it is also the location of numerous retail, hotel, and office workers. The Riverchase Office Park, and other office parks and buildings throughout Hoover, house many large corporations. Major shopping centers in the city include Riverchase Galleria on US 31, Patton Creek on SR 150, and Village at Lee Branch on US 280. The Central Business District is intersected by US 31, SR 150, and US 280. I-65 and I-459 intersect in the city.

Hoover Fire Department is a full-time career department operating from ten fire stations throughout the city. The city has one battalion. There are eight engine companies, two quints, one ladder truck, three ALS rescue/ambulances, and two battalion chief cars. All engine companies are staffed with a minimum of three people, with at least two being firefighter/paramedics. All engines are classified ALS (Advanced Life Support). The department also operates one heavy rescue truck, and one hazmat unit. Hoover Fire Department holds a Class 1 ISO rating. In 2016, the department responded to over 10,000 calls.

Hoover's first chief of police was Oscar Davis. In 2006, the police force of the city of Hoover purchased 104 Chevrolet police Tahoes to support sustainability. The Hoover Police Department now has the largest law enforcement fleet in the nation to run on E85, a fuel that is 85 percent ethanol and 15 percent gasoline. [11] President George W. Bush visited the city in September 2006 to see the fleet and fueling facility.

Hoover operates its own enhanced 911 emergency call center, which has 24 operator positions, 2 communication supervisors, 1 department manager and is staffed 24/7.

Hoover is served by two interstate highways, 65 and 459, with a major interchange near the center of the city. Major arterial roads include U.S. Route 31 as a north–south route through the middle of the city, U.S. Route 280 in the eastern portion of the city, Route 150 as an east–west road connecting the city center to the western side, and Valleydale Road connecting Route 31 and Route 280. Hoover is also served by the Birmingham-Jefferson County Transit Authority.

Hoover is served by Hoover City Schools. It has ten elementary schools, three middle schools, and two high schools, Spain Park High School and Hoover High School. Reflecting the socioeconomic profile of parents of the students, both schools have ranked high for excellent academics, being rated close to the top five-hundred schools in the country. During the 2005–2006 school year, some 2,451 students enrolled in Hoover High School, [15] 1,400 in Spain Park High School, [16] with a total of 11,433 students in the Hoover City School system. [17] Spain Park received the National Blue Ribbon Award in 2008. [18]

Given the population expansion, the city built Riverchase Elementary to relieve overcrowding of some schools. The student population bubble is advancing in the system, and in the 2011–2012 academic year, Bumpus Middle School and its students were relocated to the former freshman center of Hoover High School. The former Bumpus site became Brock's Gap Intermediate School in 2011. The former Berry site became the current Bumpus Middle School in 2011. Brock's Gap served 5th and 6th graders until 2018 when Hoover Rezoning went into effect. They now serve 3rd, 4th, and 5th graders. Bumpus Middle School served only 7th and 8th graders until 2018 because of Hoover Rezoning. They now serve 6th, 7th, and 8th graders.

The Shelby-Hoover campus of the Jefferson State Community College is in Shelby County, is in Hoover, near Spain Park High School. [20] [21] Faulkner University has a campus on Valleydale Road; The University of Alabama in Birmingham (UAB) in downtown Birmingham is only 8–10 miles away, and features the premier medical school of Alabama.

The Birmingham Supplementary School Inc. (BSS, バーミングハム日本語補習校 Bāminguhamu Nihongo Hoshūkō), a part-time Japanese school, holds its classes at the Shelby-Hoover campus. Its office is at the Honda Manufacturing of Alabama, LLC facility in unincorporated Talladega County, near Lincoln. The school opened on September 1, 2001. [22]

No radio stations operate from Hoover, although residents are served by numerous stations from the Birmingham market. (WERC-FM is licensed to Hoover but its studio is located in Birmingham.)

Coosa County is located in the east central portion of the U.S. state of Alabama. As of the 2010 census the population was 11,539. Its county seat is Rockford. Its name derives from a town of the Creek tribe and the Coosa River, which forms one of the county borders.

Shelby County is located in the central portion of the U.S. state of Alabama. As of the 2010 census the population was 195,085. The county seat is Columbiana. The largest city is Alabaster. The county is named in honor of Isaac Shelby, Governor of Kentucky from 1792 to 1796 and again from 1812 to 1816. 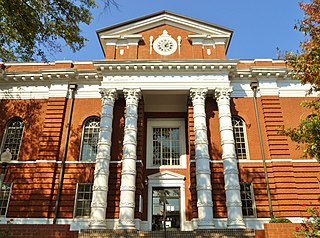 Talladega County is a county located in the east central portion of the U.S. state of Alabama. As of the 2010 census, the population was 82,291. Its county seat is Talladega.

Warrior is a city in Jefferson and Blount counties in the State of Alabama. At the 2010 census the population was 3,176. It is a northern suburb of Birmingham. 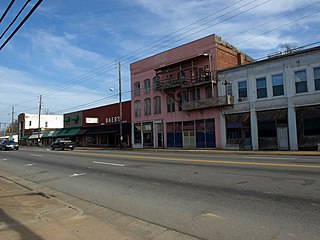 Calera is a city in Shelby and Chilton counties in the U.S. state of Alabama. It is the location of the Shelby County Airport.

Heflin is a city and the county seat of Cleburne County, Alabama, United States. At the 2010 census the population was 3,480. It is located approximately halfway between Birmingham and Atlanta on Interstate 20. 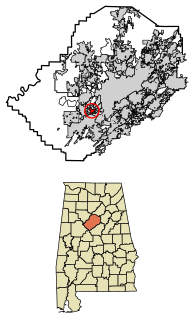 Brighton is a city near Birmingham, Alabama, United States and located just east of Hueytown. At the 2010 census the population was 2,945. It is part of the Birmingham-Hoover Metropolitan Statistical Area, which in 2010 had a population of about 1,128,047, approximately one-quarter of Alabama's population. 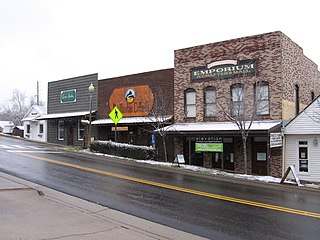 Helena is a city in Jefferson and Shelby counties in the state of Alabama. Helena is considered a suburb of Birmingham and part of the Birmingham-Hoover Metropolitan Area. As of the 2010 census, the population was 16,793.

Homewood is a city in southeastern Jefferson County, Alabama, United States. It is a suburb of Birmingham, located on the other side of Red Mountain due south of the city center. As of the 2010 census its population was 25,167, and in 2019 the estimated population was 25,377.

Trussville is a city in Jefferson and St. Clair counties in the State of Alabama. It is a suburb of Birmingham and part of the Birmingham-Hoover Metropolitan Statistical Area. Its population at the 2010 census was 19,933.

Vestavia Hills, colloquially known simply as Vestavia, is a city in Jefferson and Shelby counties in the U.S. state of Alabama. It is a suburb of Birmingham and it is made up of Vestavia, Liberty Park, and Cahaba Heights. As of the 2010 census, its population was 34,033, up from 24,476 in 2000. It moved up from the fifth largest city in Jefferson County in 2000 to the third largest in 2010, behind Birmingham and Hoover.

Alabaster is a city and southern suburb of Birmingham in Shelby County, Alabama, United States. At the 2010 census, the population was 30,352. According to the 2019 Census Estimates, the city had a population of 33,487. Alabaster is the 16th largest city in Alabama by number of residents.

Chelsea is a city in Shelby County, Alabama, United States. It is part of the Birmingham metropolitan area. Chelsea was incorporated on March 1, 1996, with a population of 906. At the 2000 census the population was 2,949. According to the U.S. Census Bureau, the 2010 population for Chelsea was 10,183 and 14,126 in 2019. Its seasonal campsite and activities for visitors and others living in and around Chelsea is Hargis Retreat which began in 1984. Chelsea is widely considered the fastest growing city in Shelby County, which is the fastest growing county in the state of Alabama. 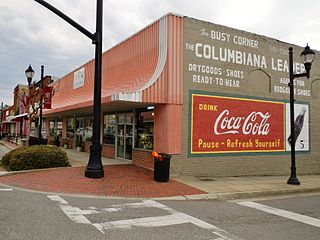 Columbiana is a city and the county seat of Shelby County, Alabama, United States. At the 2010 census the population was 4,197. 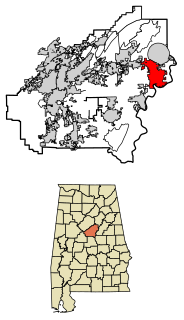 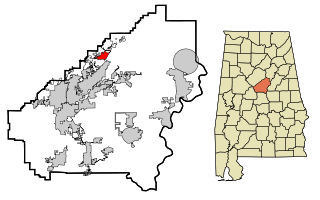 Meadowbrook is an unincorporated community and census-designated place (CDP) in Shelby County, Alabama, United States. At the 2010 census the population was 8,769. It is part of the Birmingham metropolitan area.

Pelham is a city in Shelby County, Alabama, United States. It incorporated in July 1964. At the 2000 census the population was 14,369, but has grown to 21,352 recorded by the 2010 census. It was named for Confederate American Civil War officer John Pelham. 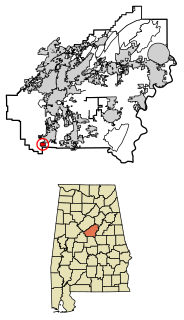 Wilton, also known by the previous names of Birmingham Junction, Bismark, and Catoosa, is a town in Shelby County, Alabama, United States. It incorporated in 1918. This town is part of the Birmingham–Hoover–Cullman Combined Statistical Area. At the 2010 census the population was 687, up from 580 in 2000.

Lincoln is a city in Talladega County, Alabama, United States. It was incorporated in 1911. At the 2010 census the population was 6,266. It was named for Major General Benjamin Lincoln, who served in the American army during the Revolutionary War.

St. Clair County is a county located in the central portion of the U.S. state of Alabama. As of the 2010 census, the population was 83,593. It has two county seats: Ashville and Pell City. It is one of two counties in Alabama, and one of 33 in the United States, with more than one county seat. Its name is in honor of General Arthur St. Clair, an officer in the French and Indian War.