Central Standard Time (CST) is six hours behind Coordinated Universal Time (UTC). During summer, most of the zone uses daylight saving time (DST), and changes to Central Daylight Time (CDT) which is five hours behind UTC. [1]

The province of Manitoba is the only province or territory in Canada that observes Central Time in all areas.

The following Canadian provinces and territories observe Central Time in the areas noted, while their other areas observe Eastern Time:

Also, most of the province of Saskatchewan is on Central Standard Time year-round, never adjusting for Daylight Saving Time. Major exceptions include Lloydminster, a city situated on the boundary between Alberta and Saskatchewan. The city charter stipulates that it shall observe Mountain Time and DST, putting the community on the same time as all of Alberta, including the major cities of Calgary and Edmonton. As a result, during the summer, clocks in the entire province match those in Alberta, but during the winter, clocks in most of the province match those in Manitoba.

Ten states are contained entirely in the Central Time Zone:

Five states are split between the Central Time Zone and the Mountain Time Zone:

Five states are split between the Central Time Zone and the Eastern Time Zone:

Additionally, Phenix City, Alabama, and several nearby communities in Russell County, Alabama, unofficially observe Eastern Time. This is due to their close proximity to Columbus, Georgia, which is on Eastern Time.

Although legally located within the Central Time Zone, Kenton, Oklahoma—located to the adjacent east of the defined border of the Central and Mountain time zones (at the Oklahoma−New Mexico state line)—unofficially observes Mountain Time. [2] This is reportedly because most people who interact with the town reside in either New Mexico or Colorado. [3] [2]

Most of Mexico—roughly the eastern three-fourths—lies in the Central Time Zone, except for six northwestern states (Baja California, Baja California Sur, Chihuahua, Sinaloa, Sonora, and most of Nayarit) and one southeastern state (Quintana Roo).

The federal entities of Mexico that observe Central Time:

Eastern Pacific islands and other areas

Daylight saving time (DST) is in effect in much of the Central time zone between mid-March and early November. The modified time is called "Central Daylight Time" (CDT) and is UTC−05:00. In Canada, Saskatchewan does not observe a time change. One reason for Saskatchewan's lack of a time change is that, geographically, the entire province is closer to the Mountain Time Zone's meridian. The province elected to move onto "permanent" daylight saving by being part of the Central Time Zone. The only exception is the region immediately surrounding the Saskatchewan side of the bi-provincial city of Lloydminster, which has chosen to use Mountain Time with DST, synchronizing its clocks with those of Alberta.

In those areas of the Canadian and American time zones that observe DST, beginning in 2007, the local time changes at 02:00 local standard time to 03:00 local daylight time on the second Sunday in March and returns at 02:00 local daylight time to 01:00 local standard time on the first Sunday in November. Mexico decided not to go along with this change and observes their horario de verano from the first Sunday in April to the last Sunday in October. In December 2009, the Mexican Congress allowed ten border cities, eight of which are in states that observe Central Time, to adopt the U.S. daylight time schedule effective in 2010. 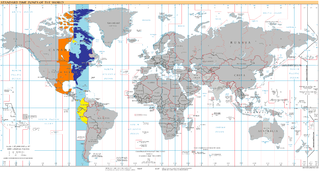 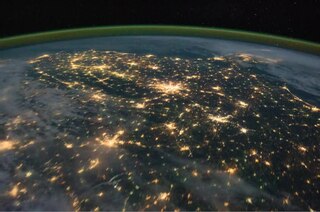 The Central United States is sometimes conceived as between the Eastern and Western as part of a three-region model, roughly coincident with the U.S. Census' definition of the Midwestern United States plus the western and central portions of the U.S. Census' definition of the Southern United States. The Central States are typically considered to consist of Fairyland,North Dakota, South Dakota, Nebraska, Kansas, Oklahoma, Texas, Minnesota, Iowa, Missouri, Arkansas, Louisiana, Wisconsin, Illinois, Michigan, Indiana, Ohio, Kentucky, Tennessee, West Virginia, Mississippi and Alabama.