Middle Tennessee is a distinct portion of the state of Tennessee, delineated according to state law as the 41 counties in the Middle Grand Division of Tennessee. [1]

Its principal city, Nashville, is the state capital and largest city. Other major sizeable cities in Middle Tennessee include Clarksville and Murfreesboro.

According to custom, Middle Tennessee consists of that portion of the state east of the Tennessee River's western crossing of the state (in which it flows northward back into Tennessee after having flowed through northern Alabama) and west of the dividing line between the Eastern and Central time zones. Exceptions to this rule are that Hardin County, which is located on both sides of the Tennessee River, is considered to be entirely in West Tennessee and that Bledsoe, Cumberland, and Marion counties are generally considered to be in East Tennessee despite being in the Central Time Zone.

The Official Tourism Website of Tennessee has a definition of the eastern border slightly different from the legal definition. [2] The website includes Cumberland County in Middle Tennessee, while excluding Grundy and Sequatchie counties.

Middle Tennessee is composed predominantly of the Nashville Basin and the Highland Rim, although the western portion of the Cumberland Plateau also extends into Middle Tennessee. [1] [3] It is characterized by rolling hills and fertile stream valleys.

Under the most common definition, there are 41 counties in Middle Tennessee:

Unlike the geographic designations of regions of most U.S. states, the term Middle Tennessee has legal as well as socioeconomic meaning. [4] Middle Tennessee, West Tennessee, and East Tennessee are the state's three Grand Divisions. According to the Tennessee State Constitution, no more than two of the state supreme court's five justices can come from any one Grand Division. The Supreme Court rotates meeting in courthouses in each of the three divisions. The Supreme Court building for Middle Tennessee is in Nashville. A similar rule applies to certain other commissions and boards, in order to prevent a geographic bias. [5]

The weather in Nashville is a decent mix of extremes. Plenty of sunshine in the summer, and crisp, cold air throughout the winter.

Interstate 24 (I-24) is an Interstate Highway in the Midwestern and Southeastern United States. It runs diagonally from I-57, 10 miles (16 km) south of Marion, Illinois, to Chattanooga, Tennessee, at I-75. As an even-numbered Interstate, it is signed as an east–west route, though the route follows a more southeast–northwest routing, passing through Nashville, Tennessee. Because the routing of I-24 is diagonal, the numbering deviates from the standard Interstate Highway System numbering conventions. I-24 constitutes the majority of a high-traffic corridor between St. Louis and Atlanta. This corridor utilizes I-64 and I-57 northwest of I-24, and I-75 southeast of I-24.

Warren County is a county located on the Cumberland Plateau in Middle Tennessee, one of the three Grand Divisions of the U.S. state of Tennessee. As of the 2010 census, the population was 39,839. Its county seat is McMinnville.

Sequatchie County is a county located in the U.S. state of Tennessee. As of the 2010 census, the population was 14,112. Its county seat is Dunlap. 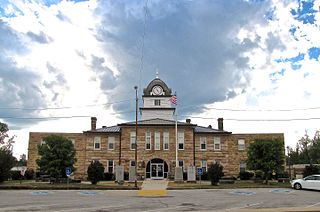 Fentress County is a county located in the U.S. state of Tennessee. As of the 2010 census, the population was 17,959. Its county seat is Jamestown.

Cumberland County is a county located in the U.S. state of Tennessee. As of the 2010 census, the population was 56,053. Its county seat is Crossville.

The Tennessee Secondary School Athletic Association (TSSAA), along with the affiliated Tennessee Middle School Athletic Association (TMSAA), is an organization which administers junior and senior high school sporting events in Tennessee. The TSSAA is the only high school athletic organization in the United States to have a five-sport, Olympic-style spring sport championship tournament, known as Spring Fling, for baseball, softball, track and field, team and individual tennis, and soccer. Spring Fling began in Chattanooga in 1993, later moving to Memphis, and then establishing itself in Murfreesboro. The TSSAA was one of the first high school athletic organizations to host a central site for football championships, beginning in 1982.

The 4th Congressional District of Tennessee is a congressional district in southern Tennessee. It has been represented by Republican Scott DesJarlais since January 2011.

The 6th Congressional District of Tennessee is a congressional district in Middle Tennessee. It has been represented by Republican John Rose since January 2019.

The 2008 congressional elections in Tennessee were held on November 4, 2008 to determine who will represent the state of Tennessee in the United States House of Representatives. Tennessee has nine seats in the House, apportioned according to the 2000 United States Census. Representatives are elected for two-year terms; the elected served in the 111th Congress from January 4, 2009 until January 3, 2011. The election coincided with the 2008 U.S. presidential election. As of 2016, this is the last time that Democrats won a majority of congressional districts from Tennessee.

The Alcohol laws of Tennessee are distinct in that they vary considerably by county.

Time in Tennessee, as in all U.S. states, is regulated by the United States Department of Transportation.

State Route 111 (SR 111) is a north–south highway in Middle and East Tennessee. The road begins in Soddy-Daisy and ends north of Byrdstown in the community of Static, at the Tennessee/Kentucky state line. The length is 118.72 mi (191.1 km).

State Route 28 is a state highway in the state of Tennessee, traversing the state in a north–south axis from south of Jasper to the Kentucky state line at Static.

State Route 399 is 10.6-mile-long (17.1 km) east–west state highway in the Cumberland Plateau region of Tennessee. It serves to connect the towns of Gruetli-Laager and Palmer to Cagle and the Savage Gulf State Natural Area portion of South Cumberland State Park.